The College of Architecture, Art, and Planning (AAP) at Cornell University is one of the world's most highly regarded and prestigious schools of architecture and is the only department in the Ivy League to offer the Bachelor of Architecture degree. Accordingly, to "DesignIntelligence," Cornell's architecture students are the most wanted recent graduates by architecture firms especially in New York City. The department has one of the highest endowments of any architecture program, including a $20 million endowment by Cayuga County resident Ruth Price Thomas in 2002.[2] The Master of Regional Planning (M.R.P.) professional program at AAP has been consistently ranked in the top ten in the nation according to Planetizen's Guide to Graduate Urban Planning Programs.[3] Among the college's notable alumni are architects Richard Meier (B.Arch. '56), designer of the Getty Center in Los Angeles, and Peter Eisenman, B.Arch, '55, founder of the Institute for Architecture and Urban Studies in New York City; artists Charles Ginnever (M.F.A. '59), Louise Lawler (B.F.A. '69), and Susan Rothenberg (B.F.A. '67); and planners Edmund Bacon (B.Arch. '32), Paul Farmer (M.R.P. '71), Norman Krumholz (M.R.P. '65), and Robert Mier (M.R.P. '73, Ph.D. '75).

The college is divided into three departments: Architecture, Art, and City and Regional Planning. In 2015, AAP was the most selective of the university's seven colleges, admitting only 4.78% of applicants.

The two-year Master of Fine Arts (M.F.A.) program in the Department of Art encourages both interdisciplinary and medium-specific practices, and questions a pedagogy informed solely by Western models and traditions of art.

The Department of City and Regional Planning (CRP) is the home of leading programs in planning, historic preservation planning, and urban and regional studies. The program is an intensive and intimate community which has an exceptional breadth and integration of its context. Each student works closely with a special thesis committee of their choosing that can encompass faculty members from across the university, allowing for a specialized and unique experience with limitless possibilities. CRP offers a bachelor of science in urban and regional studies (B.S. URS) that encompasses an interdisciplinary, liberal arts course of study focused on the forces that shape the social, economic, and political character and physical form of urban/suburban areas and their surrounding regions. CRP also offers an urban and regional studies (URS) minor for students not enrolled in the URS program. An accelerated M.R.P. degree option is available to graduates of the URS program. There are a variety of five-year dual degree options available to URS students in fields including engineering, landscape architecture, and natural and social sciences. Additionally, CRP offers an M.A. and a Ph.D. in regional science, and an M.A. in Historic Preservation Planning. Cornell was one of the first institutions in the country to offer preservation classes and is internationally recognized as a leader in the field.

Cornell University's architecture department was established in 1871 as the School of Architecture with the hiring of Charles Babcock as the first Professor[4] creating the first four-year course of study in architecture in the United States. Its first graduate, William Henry Miller, '72, designed many iconic buildings on campus including Risley Hall, Uris Library and its adjoining McGraw Tower, the presidential mansion (today known as the A.D. White House), and Boardman Hall, the original home of the Law School. It is currently the smallest of the seven undergraduate colleges and schools, with an undergraduate enrollment of 496 and a faculty of 56.[5][6] 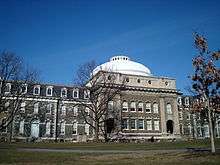 The college occupies four buildings on the northern end of the Arts Quad. Located in Sibley Hall are the City & Regional Planning Department, the Architecture Department, the Cornell in Rome program, and the Office of the Dean. The Green Dragon Cafe and student lounge is located in the basement.

Olive Tjaden Hall is used by the Department of Art. It houses painting, drawing, photography, and lithography studios. It also contains the Art Department main office and faculty offices. Rand Hall is home to studios and classrooms of the Department of Architecture. In 2011, the Fine Arts Library was moved from the Sibley Hall Dome to the top floor of Rand Hall following a reorganization coinciding with the opening of adjacent Milstein Hall.

Located directly behind Sibley, the Rem Koolhaas-designed Milstein Hall (named after Paul Milstein) features a prominent cantilevering structure housing studio space that extends over University Avenue. The LEED-certified building also provides an array of other features such as a stepped auditorium space for presentations and meetings, crit space, galleries, and a sunken garden. Design for the building was a grueling process, with several architects and a constantly delayed schedule. The unfinished building opened to students in the Fall of 2011, with the ceremonial completion scheduled the following Spring. In January 2013, the American Institute of Architects (AIA) gave Milstein Hall the Honor Award, its highest award.[8] Designed by OMA, Milstein Hall was among 11 buildings in the United States and Canada that received 2013 AIA Honor Awards for Architecture.

The College of Architecture, Art, and Planning runs several off-campus programs. The most prominent of these is the Cornell in Rome Program in which students from all three disciplines, as well as Cornell students from outside AAP, spend one semester in Rome studying ancient to modern practices in architecture, art, and urban planning in classes taught by Cornell professors and Rome-based faculty. The program is housed at the 17th-century Palazzo Santacroce, in the historic center of Rome, minutes from the Pantheon and Piazza Navona. The Department of Planning also offers a winter program on sustainability in Panama, and a summer program on urban development in Brazil.[9]

Additionally, in 2006, the college opened AAP NYC, a 5,500-square-foot (510 m2) facility near Union Square in New York City, as a work and display space as well as a venue for Cornell events. AAP students can choose to spend 1 semester at AAP NYC, where they take studio and other classes, and are assigned an internship in a major architecture firm due to Cornell's influence and alumni connections.[10]

The journal DesignIntelligence has consistently ranked Cornell's undergraduate architecture program as No. 1 in the nation in its annual "America's Best Architecture & Design Schools" issue.[11][12]

As of 2016, the program's ten-year average ranking, places it 5th, overall, on DesignIntelligence's ranking of programs accredited by the National Architectural Accrediting Board.