For other uses, see The Cost of Living (disambiguation). 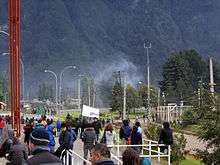 Employment contracts, pension benefits, and government entitlements such as Social Security can be tied to a cost-of-living index, typically to the consumer price index (CPI). A COLA adjusts salaries based on changes in a cost-of-living index. Salaries are typically adjusted annually. They may also be tied to a cost-of-living index that varies by geographic location if the employee moves. In this later case, the expatriate employee will likely see only the discretionary income part of their salary indexed by a differential CPI between the new and old employment locations, leaving the non-discretionary part of the salary (e.g., mortgage payments, insurance, car payments) unmodified.

Annual escalation clauses in employment contracts can specify retroactive or future percentage increases in worker pay which are not tied to any index. These negotiated increases in pay are colloquially referred to as cost-of-living adjustments or cost-of-living increases because of their similarity to increases tied to externally determined indexes. Cost-of-living allowance is equal to the nominal interest minus the real interest rate.

When cost-of-living adjustments, negotiated wage settlements and budgetary increases exceed CPI, media reports frequently compare the two without consideration of the pertinent tax code. However, CPI is based on the retail pricing of a basket of goods and services. Most purchases of that same basket require the use of after-tax dollars—dollars that were often subject to the highest marginal tax rate. Consequently, the COLA will necessarily have to exceed the CPI inflation rate to maintain purchasing power.

The widely recognized problem known as bracket-creep can also occur in countries where the marginal tax brackets themselves are not indexed—COLA increases simply place more dollars into higher tax rate brackets. (Only under a flat tax system would a percentage gain on gross income translate into a comparable inflation-offsetting gain at the after-tax level.)

Some salaries and pensions in the United States with a COLA (they vary by type) include:

Pensions in Canada with a COLA include:

The survey itself is an internet tool designed to calculate cost-of-living allowances and build compensation packages for expatriates and business travellers. The survey incorporates easy-to-understand comparative cost of living indices between cities. The survey allows city-to-city comparisons, but for the purpose of this report all cities are compared to a base city of New York City, which has an index set at 100. The survey has been carried out for more than 30 years.

Stipends or extra pay provided to employees who are being temporarily relocated may also be called cost-of-living adjustments or cost-of-living allowances. Such adjustments are intended to offset changes in welfare due to geographic differences in the cost of living. Such adjustments might more accurately be described as a per diem allowance or tied to a specific item, as with housing allowances. Employees who are being permanently relocated are less likely to receive such allowances, but may receive a base salary adjustment to reflect local market conditions.

A cost-of-living allowance is frequently given to members of the U.S. military stationed at overseas bases if the area to which a service member is assigned has a higher cost of living than the average area in the United States. For example, service members stationed in Japan receive a cost of living allowance of between $300 and $700 per month (depending on pay grade, years of service, and number of dependents), in addition to their base pay. This additional pay is non-taxable.