With its seat being in Mannheim, Germany, the RdR was formed in 2004 as a successor to the Zwischenstaatliche Kommission für deutsche Rechtschreibung ("Intergovernmental Commission for German Orthography") in order to comprise proponents as well as opponents to the German orthography reform of 1996 (and subsequent reforms).[1] 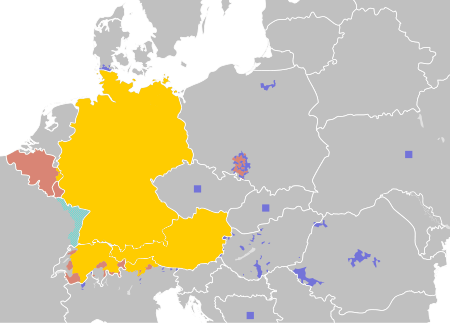 German Sprachraum and full members of the Council for German Orthography

Currently the RdR is composed of 39 members from those states and regions that comprise the German Sprachraum:[2]

Despite having German as one of its official languages, Luxembourg, which was not involved in devising the reform of 1996, is not a full member of the council. The government of Luxembourg unilaterally adopted the reform, and its efficiency makes it well-accepted by the country's teachers.

According to the duchy's largest newspaper, the Luxemburger Wort, Luxembourg does not perceive itself as a "German-speaking country" (the only national language is Luxembourgish) and thus had no right to take part in the council.[3]

However, Luxembourg participates in La Francophonie and has members in the Académie française, despite French being only an official language, just like German.[4]