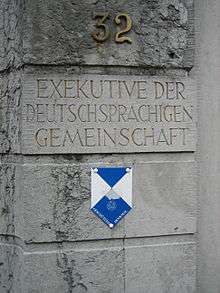 The Executive (government) of the German-speaking Community meets in Eupen.

Bordering the Netherlands, Germany and Luxembourg, the area has its own parliament and government at Eupen. Although in the Belgian province of Luxembourg many of the inhabitants in the border region next to the Grand Duchy of Luxembourg speak Luxembourgish, a West Central German language, they are not considered part of the German-speaking Community. The German-speaking Community of Belgium is composed of the German-speaking parts of the lands that were annexed in 1920 from Germany. In addition, in contemporary Belgium there are also some other areas where Germanic languages was or is spoken (the difference line between German, Dutch, Luxembourgish and Limburgish is very slight since they are all part of the same dialect continuum) that belonged to Belgium even before 1920, but they are not currently officially considered part of the German-speaking Community of Belgium: Bleiberg-Welkenraedt-Baelen in northeastern province of Liège and Arelerland (city of Arlon and some of its nearby villages in southeastern province of Belgian Luxembourg). However, in these localities, the German language is declining due to the expansion of French.[2] 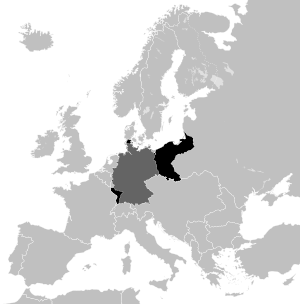 Eupen-Malmedy area and other German territories lost in both World Wars are shown in black, present-day Germany is marked dark grey on this 1914 map.

The area known today as the East Cantons consists of the German-speaking Community and the municipalities of Malmedy and Waimes (German: Weismes), which belong to the French Community of Belgium. The East Cantons were part of the Rhine Province of Prussia in Germany until 1920 (as the counties (Landkreise) of Eupen and Malmedy), but were annexed by Belgium following Germany's defeat in World War I and the subsequent Treaty of Versailles.[3] Thus they also became known as the cantons rédimés, "redeemed cantons". The peace treaty of Versailles demanded the "questioning" of the local population. People who were unwilling to become Belgians and wanted the region to remain a part of Germany were required to register themselves along with their full name and address with the Belgian military administration, headed by Herman Baltia, and many feared reprisals or even expulsion for doing so.

In the mid-1920s, there were secret negotiations between Germany and the kingdom of Belgium that seemed to be inclined to sell the region back to Germany as a way to improve Belgium's finances. A price of 200 million gold marks has been mentioned.[3] At this point the French government, fearing for the complete postwar order, intervened at Brussels and the Belgian-German talks were called off.

The new cantons had been part of Belgium for just 20 years when in 1940 they were retaken by Germany in World War II. The majority of people of the east cantons welcomed this as they considered themselves German. Following the defeat of Germany in 1945 the cantons were once again annexed by Belgium, and as a result of alleged collaboration with Nazi Germany an attempt was made to de-Germanize the local population by the Belgian and Walloon authorities.

Municipalities in the German-speaking Community 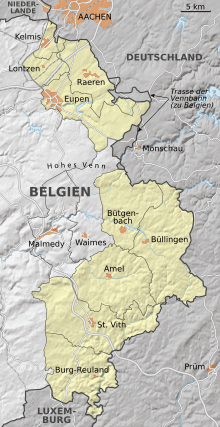 Map of the German-speaking Community (yellow)

The German-speaking Community consists of the following nine municipalities:[7]

Flag and coat of arms 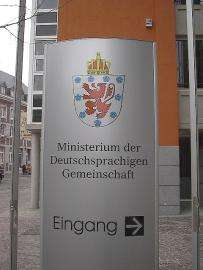 The entrance of the ministerial building of the German-speaking Community shows the coat of arms of the Community, which has the nine cinquefoils arranged differently from the flag, and also sports a royal crown.

A decree adopted on 1 October 1990 and published on 15 November 1990 prescribed the arms, the flag, the colours as well as the Day of the German-speaking Community of Belgium, which was to be celebrated annually on 15 November.[8]

The coat of arms, in heraldic blazon, is: Arms: Argent, a lion rampant gules between nine cinquefoils azure. Crest: A royal crown. The flag shows a red lion together with nine blue cinquefoils on a white field. The colours of the German-speaking Community are white and red in a horizontal position.