In nuclear strategy, a counterforce target is one that has a military value, such as a launch silo for intercontinental ballistic missiles, an airbase at which nuclear-armed bombers are stationed, a homeport for ballistic missile submarines, or a command and control installation.[1] The intent of a counterforce strategy (i.e., attacking counterforce targets with nuclear weapons) is to disarm an adversary by destroying its nuclear weapons before they can be launched, thereby minimizing the impact of a retaliatory second strike.[2] However, counterforce attacks are also possible in a second strike, especially with weapons like UGM-133 Trident II. A counterforce target is distinguished from a countervalue target, which includes an adversary's population, knowledge, economic, or political resources.[1] In other words, a counterforce strike is against an adversary's military while a countervalue strike is against an adversary's cities. A closely related tactic is the decapitation strike, which by destroying an enemy's nuclear command and control facilities similarly intends to eliminate or reduce their ability to launch a second strike. 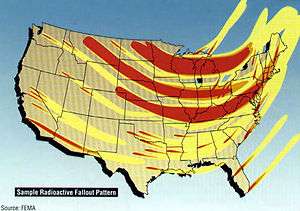 An ideal counterforce attack would kill no civilians. Military attacks are prone to causing collateral damage however, and this is especially true when nuclear weapons are employed. In nuclear terms many military targets are located in proximity to civilian centres, and a major counterforce strike employing even relatively small nuclear warheads against a nation would certainly inflict numerous civilian casualties. Further, the requirement to use ground burst strikes to destroy hardened targets would produce enormously more fallout than the air bursts used to strike countervalue targets; introducing the possibility that a counterforce strike would cause more civilian casualties—over a medium-term view—than a countervalue strike.[3]

Counterforce weapons could be seen to provide more credible deterrence in future conflict by providing options for leaders.[4] One of those options considered by the Soviet Union in the 1970s is basing missiles in orbit.

Counterforce is a type of attack which was originally proposed during the Cold War.

Both sides in the Cold War took steps to protect at least some of their nuclear forces from counter-force attacks. At one point the US kept B-52 Stratofortress bombers permanently in flight; these would remain operational after any counter-force strike. Other bombers were kept ready for launch on short notice, allowing them to escape their bases before intercontinental ballistic missiles (launched from land) could destroy them. The deployment of nuclear weapons on ballistic missile submarines changed this equation considerably – submarines launching from positions off the coast would likely destroy airfields before bombers could launch, reducing their ability to survive an attack. Submarines themselves, however, are largely immune from counter-force strikes (unless they are moored at their naval bases) and both sides fielded many such weapons during the Cold War.

U.S. DoD map of the Soviet Strategic Rocket Forces ICBM silos and bases in the 1980s.

A counter-force exchange was one scenario mooted for a possible limited nuclear war. The concept was that one side might launch a counter-force strike against the other; the victim would recognize the limited nature of the attack and respond in kind, leaving the military capability of both sides largely destroyed. The war might then come to an end because both sides would recognize that any further action would lead to attacks on the civilian population from the remaining nuclear forces – a counter-value strike. Critics of this idea claimed that since even a counter-force strike would kill millions of civilians (because some strategic military facilities like bomber airbases were often located near large cities) it is unlikely that escalation to a full-scale counter-value war could be prevented.

MIRVed land-based ICBMs are considered destabilizing because they tend to put a premium on striking first. For example, suppose that each side has 100 missiles, with 5 warheads each, and each side has a 95 percent chance of neutralizing the opponent's missiles in their silos by firing 2 warheads at each silo. In this case, the side that strikes first can reduce the enemy ICBM force from 100 missiles to about 5 by firing 40 missiles with 200 warheads, and keeping the rest of 60 missiles in reserve. For such an attack to be successful, the warheads would have to strike their targets prior to the enemy launching a counter-attack (see second strike and launch on warning). It is because of this that this type of weapon was banned under the START II agreement.