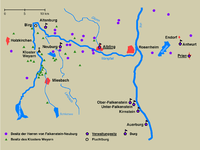 The counts of Falkenstein had their oldest possessions in the upper Vils valley near Taufkirchen (Vils) and the valley of Inn in southern Bavaria. In the zenith of their power they controlled a wide region extending into Tyrol, the Mangfall valley, Lower Austria and Chiemgau.

The allodial possessions of the Falkensteiners were in Geiselbach in the upper Vils valley. The first count of Falkenstein mentioned in records was Reginolt de Valchensteine (1115), although both the Falkensteiner and Neuburger lineage seem to descend from Patto von Dilching (early 11th century).[1]

Being known as the oldest feud directory and urbar, the Codex Falkensteinensis is considered as the only conserved tradition book of a secular authority. It was created in 1170 at the Falkensteiner Neuburg near Vagen.