A typical Dutch house in Delft, with a crow-stepped gable.

Crow-stepped gables were also used in Scotland as early as the 16th century.[1] Examples of Scottish crow-stepped gable can be seen at Muchalls Castle, Monboddo House, and the Stonehaven Tolbooth, all late 16th- and early 17th-century buildings.

19th-century examples are found in North America, and the step gable is also a feature of the northern-Renaissance Revival and Dutch Colonial Revival[2] styles. 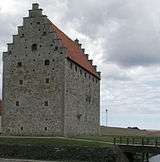 The crow-stepped gables of Glimmingehus, Scania, Scandinavia's best-preserved medieval manor, built in 1499 by a Danish knight.

Convenient access to the roof ridge motivated the crow-step design, along with the availability of squarish stones to accomplish this form of construction. The access would have been convenient for chimney sweeps and roofers in earlier times, where cranes were non-existent and tall ladders were not common.

With crow steps, the roofing slates (rarely tiles) do not reach the end of the building, so making for a special problem with keeping the roof watertight.[3] Many different schemes are found for overcoming this, some of which are described below. Terms currently used in Scotland are italicised.

When lead is to be held into a raggle, small folded lead wedges called bats are inserted at intervals and hammered in so they expand. The raggle is then sealed with mortar. Crow steps are frequently made of sandstone, even on buildings otherwise of granite,[4] and it is said that the porous nature of sandstone leads to problems with water penetration. Because of this, crow steps are sometimes capped with lead or sealed with other materials.

There are a number of variations on the basic design. One such structure is Culross Palace built in 1597 which features a veiled woman on the crow steps. Roofs in Scotland are typically steeper than in the rest of the United Kingdom (possibly because it snows more) making for steeper and more step-like steps.

The Nuttall Encyclopædia suggests this architectural feature is called corble steps.[5] Corbie steps (from the Scots language corbie: crow) is a more common version. Another term sometimes used is craw step. In Dutch, this design is termed trapgevel ("stair-step gable"), characteristic of many brick buildings in the Netherlands, Belgium, and in Dutch colonial settlements.