For other uses, see Delft (disambiguation).

Delft ([dɛlft]) is a city and a municipality in the Netherlands. It is located in the province of South Holland, to the north of Rotterdam and south of The Hague.

Delft is known for its historic town centre with canals, Delft Blue pottery, the Delft University of Technology, painter Johannes Vermeer and scientist Antony van Leeuwenhoek, and its association with the royal House of Orange-Nassau.

The city of Delft came into being aside a canal, the 'Delf', which comes from the word delven, meaning delving or digging, and led to the name Delft. It presumably started around the 11th century as a landlord court.

From a rural village in the early Middle Ages Delft developed to a city, that in the 13th century (1246) received its charter. (For some more information about the early development, see Gracht).

The town's association with the House of Orange started when William of Orange (Willem van Oranje), nicknamed William the Silent (Willem de Zwijger), took up residence in 1572. At the time he was the leader of growing national Dutch resistance against Spanish occupation, known as the Eighty Years' War. By then Delft was one of the leading cities of Holland and it was equipped with the necessary city walls to serve as a headquarters. An attack by Spanish forces in October of that year was repelled.

After the Act of Abjuration was proclaimed in 1581 Delft became the de facto capital of the newly independent Netherlands, as the seat of the Prince of Orange.

When William was shot dead in 1584, by Balthazar Gerards in the hall of the Prinsenhof, the family's traditional burial place in Breda was still in the hands of the Spanish. Therefore, he was buried in the Delft Nieuwe Kerk (New Church), starting a tradition for the House of Orange that has continued to the present day.

The Delft Explosion, also known in history as the Delft Thunderclap, occurred on 12 October 1654 when a gunpowder store exploded, destroying much of the city. Over a hundred people were killed and thousands were wounded.

About 30 tonnes (29.5 long tons; 33.1 short tons) of gunpowder were stored in barrels in a magazine in a former Clarissen convent in the Doelenkwartier district. Cornelis Soetens, the keeper of the magazine, opened the store to check a sample of the powder and a huge explosion followed. Luckily, many citizens were away, visiting a market in Schiedam or a fair in The Hague. Artist Carel Fabritius was wounded in the explosion and died of his injuries. Later on, Egbert van der Poel painted several pictures of Delft showing the devastation.

The city centre retains a large number of monumental buildings, whereas in many streets there are canals of which the borders are connected by typical bridges,[5] altogether making this city a notable tourist destination.[6]

Historical buildings and other sights of interest include: 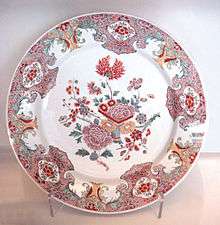 Delft blue is most famous but there are other kinds of Delftware, like this plate faience in rose

Delft is well known for the Delft pottery ceramic products[6] which were styled on the imported Chinese porcelain of the 17th century. The city had an early start in this area since it was a home port of the Dutch East India Company. It can still be seen at the pottery factories De Koninklijke Porceleyne Fles (or Royal Delft) and De Delftse Pauw.

The painter Johannes Vermeer (1632–1675) was born in Delft. Vermeer used Delft streets and home interiors as the subject or background of his paintings.[6] Several other famous painters lived and worked in Delft at that time, such as Pieter de Hoogh, Carel Fabritius, Nicolaes Maes, Gerard Houckgeest and Hendrick Cornelisz. van Vliet. They all were members of the Delft School. The Delft School is known for its images of domestic life, views of households, church interiors, courtyards, squares and the streets of Delft. The painters also produced pictures showing historic events, flower paintings, portraits for patrons and the court, and decorative pieces of art. 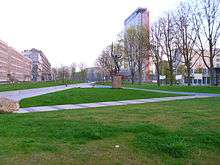 Delft University of Technology (TU Delft) is one of four universities of technology in the Netherlands.[8] It was founded as an academy for civil engineering in 1842 by King William II. Today well over 20,000 students are enrolled.

The UNESCO-IHE Institute for Water Education, providing postgraduate education for people from developing countries, draws on the strong tradition in water management and hydraulic engineering of the Delft university. 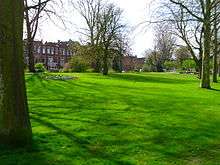 In the local economic field essential elements are:

East of Delft a relatively vast nature and recreation area called the "Delftse Hout" ("Delft Wood")[9] is situated. Apart from a forest, through which bike-, horseride- and footpaths are leading, it also comprises a vast lake (suitable for swimming and windsurfing), narrow beaches, a restaurant, community gardens, plus campground and other recreational and sports facilities. (There is a possibility to rent bikes at the station).

Inside the city apart from a central park there are also several smaller town parks, like "Nieuwe Plantage", "Agnetapark", "Kalverbos" and others. Furthermore, there's a Botanical Garden of the TU and an arboretum in Delftse Hout.

Delft was the birthplace of:

One of the 6 different Nuna cars

See also: List of twin towns and sister cities in the Netherlands 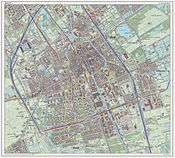 Trains stopping at these stations connect Delft with, among others, nearby cities of Rotterdam and The Hague, up to every five minutes, for most of the day.

There are several bus routes from Delft to similar destinations. Trams frequently travel between Delft and The Hague via special double tracks crossing the city. One of those two lines (19) is still under construction inside Delft and is meant to connect The Hague with a science park, which being developed on the southern (Rotterdam) side of Delft and is a joint project by the Delft and Rotterdam municipalities.[17]