Cuirassiers (/ˌkwɪrəˈsɪər/, from French cuirassier,[1] pronounced: [kɥiʁasje]) were cavalry equipped with armour and firearms, first appearing in late 15th-century Europe. This French term means "one with a cuirass" (cuirasse), the breastplate armour which they wore.[2] The first cuirassiers were produced as a result of armoured cavalry, such as the man-at-arms and demi-lancer, discarding their lances and adopting the use of pistols as their primary weapon. In the later 17th century, the cuirassier lost his limb armour and subsequently employed only the cuirass (breastplate and backplate), and sometimes a helmet. By this time, the sword was the primary weapon of the cuirassier, pistols being relegated to a secondary function.

Cuirassiers achieved increased prominence during the Napoleonic Wars and were last fielded in the opening stages of World War I. Cuirassiers continue to be employed as ceremonial troops by a number of countries. 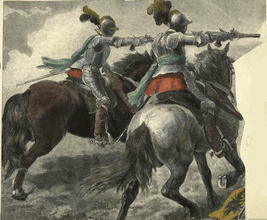 The first cuirassiers were similar in appearance to the fully armoured Late Medieval man-at-arms. They wore three-quarter armour that covered the entire upper body as well as the front half of the legs down to the knee. The head was protected by a close helm, burgonet or lobster-tailed pot helmet, usually worn with a gorget for the neck. The torso was protected by a breast and back plate, sometimes reinforced by a 'placate'. The arms and shoulders were fully armoured with pauldrons, rerebraces, elbow couters and vambraces. Armoured gauntlets were often abandoned, particularly for the right hand, as they interfered with the loading of pistols. Long tassets, instead of a combination of short tassets with cuisses, protected the front of the thighs and knees, Riding boots were substituted for lower leg armour (greaves and sabatons).[3] Weapons included a pair of pistols in saddle holsters (these were the primary weapons instead of a lance), sometimes a "horseman's pick" (a type of war hammer), and a sword. Horse armour was not used.

The armour of a cuirassier was very expensive; in England, in 1629, a cuirassier's equipment cost four pounds and 10 shillings, whilst a harquebusier's (a lighter type of cavalry) was a mere one pound and six shillings.[4]

During the latter half of the 16th century, the heavy "knightly" lance gradually fell out of use perhaps because of the widespread adoption of the infantry pike. Also, the lance required a great amount of practice to perfect its use, whilst proficiency in the use of firearms was considerably more easily acquired. The lancer or demi-lancer, when he had abandoned his lance, became the pistol-armed cuirassier or reiter. 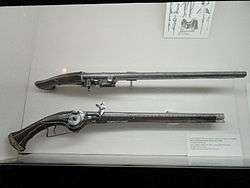 A pair of long-barrelled wheel-lock pistols, the primary weapon of the early cuirassier

The adoption of the pistol as the primary weapon led to the development of the stately caracole tactic, where cuirassiers fired their pistols at the enemy, then retired to reload whilst their comrades advanced in turn to maintain the firing. Following some initial successes, this tactic proved to be extremely ineffective as infantry, with superior firearms and numbers could easily outgun the cuirassiers. The change from cavalry being reliant on firearms, to shock-capable close combat cavalry reliant mainly on the sword was often attributed to Gustavus Adolphus of Sweden in the 1620s and 1630s.[5] Gustavus Adolphus also reduced the number of ranks in a cavalry formation from the previously usual six to ten, for pistol-based tactics, to three to suit his sword-based shock tactics, or as a partial remedy to the frequent numerical inferiority of his cavalry arm.[6]

Only two cuirassier regiments were raised during the English Civil War, the Lifeguard of the Earl of Essex and the 'London lobsters,' though individuals within other regiments did serve in full armour. With the refinement of infantry firearms, especially the introduction of the powerful musket, the usefulness of the protection afforded by full armour became greatly lessened. By the mid 17th century, the fully armoured cuirassier was becoming increasingly anachronistic. The cuirassier lost his limb armour and entered the 18th century with just the breast and backplate.[7]

Body armour, restricted to a breast and backplate, fell in and out of use during the 18th century; for example British cavalry entered the War of the Spanish Succession without body armour, although they readopted it during the conflict. Cuirassiers played a prominent role in the armies of Austria, and of Frederick the Great of Prussia. By the time of the French Revolutionary War, few heavy cavalry regiments, excepting those of Austria, wore the cuirass on campaign. The twelve Austrian cuirassier regiments in existence between 1768 and 1802 (when the number was reduced) unusually wore only a front plate.[8] This reduced the burden of the weight carried by the individual trooper but left his back unprotected during a swirling cavalry melee.

Most heavy cavalry from c. 1700 to c. 1785 wore the tricorne hat, which evolved into the bicorne, or cocked hat, towards the close of the century. In the first two decades of the 19th century, helmets, often of hardened leather with brass reinforcement (though the French used iron-skulled helmets for their cuirassiers), replaced the bicorne hat.

A resurgence of armoured cavalry took place in France under the rule of Napoleon Bonaparte, who increased the number of armoured regiments from one to, ultimately, sixteen (fourteen cuirassier regiments plus two Carabiniers-à-Cheval regiments).

During the first few decades of the 19th century most of the major states of Europe, excepting Austria which had retained its armoured cavalry, readopted the cuirass for some of their heavy cavalry in emulation of the French. The Russians fielded two divisions of armoured cavalry, but most other states armoured a few senior regiments: Prussia three regiments, the Kingdom of Saxony three, the Kingdom of Westphalia two, Spain one (Coraceros Españoles) and the Duchy of Warsaw one. The three Household Cavalry regiments of the British Army (1st and 2nd Life Guards and Royal Horse Guards) adopted cuirasses shortly after the Napoleonic Wars as part of their full dress uniforms, but never had occasion to wear the armour in battle.

Cuirassiers were generally the senior branch of the mounted portion of an army, retaining their status as heavy cavalry—"big men on big horses". Their value as a heavy striking force during the Napoleonic Wars ensured that the French, Russian and Prussian armies continued to use cuirassier regiments throughout the 19th century. The Austrian cuirassiers were abolished in 1868.[9]

For reasons of climate and cost cuirassiers of the 19th century type seldom appeared outside Europe and Latin America. However Ranjit Singh's Sikh Army (the Khalsa) of the 1830s included two regiments of cuirassiers equipped and armed in French fashion. Four hundred carabinier cuirasses were imported from France while helmets and uniforms were manufactured in Wazirabad.[10]

Effectiveness during the Napoleonic Wars

Though the armour could not protect against contemporary flintlock musket fire, it could deflect shots fired from long-range, stop ricochets and offer protection from all but very close range pistol fire. More importantly, in an age which saw cavalry used in large numbers, the breastplates (along with the helmets) provided excellent protection against the swords and lances of opposing cavalry and against infantry bayonets. It also had some psychological effect for the wearer (effectively making the cuirassier more willing to plunge into the thick of fighting) and the enemy (adding intimidation), while it also added weight to a charge, especially in cavalry versus cavalry actions.

The utility of this armour was sometimes disputed. Prussian cuirassiers had abandoned the armoured cuirass before the Napoleonic Wars, but were reissued with it in 1814. During this period, a single British cavalry regiment (Royal Horse Guards) wore cuirasses during the Netherlands campaign of 1794, using breastplates taken from store.[12] The Austrian cuirassiers traded protection for mobility by wearing only the half-cuirass (without back plate) and helmet.[13] Napoleon believed it sufficiently useful that he had cuirassier-style armour issued to his two carabinier regiments after the Battle of Wagram. Despite being highly advanced from the plate armour of old, the Napoleonic era cuirass was still quite cumbersome and hot to wear in warm weather; however, the added protection that it gave to the wearer and the imposing appearance of an armoured cavalryman were factors favouring retention.

The last occasion in which cuirassiers played a major tactical role as shock cavalry wearing traditional armour was to be the Franco-Prussian War of 1870-71. The French cuirassiers numbered 11 regiments at the outbreak of war but had not seen active service since the Battle of Waterloo. A brigade comprising the 6th and 9th Regiments had served in the Crimean War but had not actually encountered the enemy.[14] Accordingly, the prospect of action against the Prussian Army, which included 10 cuirassier regiments of its own,[15] was seen as an opportunity for a strongly traditional branch of the French cavalry to prove its continuing relevance. In the event, in a series of massed charges against Prussian infantry and artillery at Froeschwiller and Rezonville, the French cuirassiers suffered very heavy losses for little return. 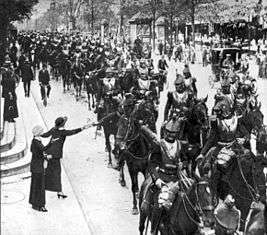 French cuirassiers in Paris, August 1914. These regiments wore cloth-covered cuirasses and helmets during the early months of World War I.[16] 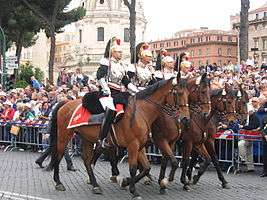 Italian corazzieri during a public event

In 1914, the German Army still retained cuirassiers (ten regiments including the Gardes du Corps and the Guards Cuirassiers); as did the French (twelve regiments) and the Russian (four regiments, all of the Imperial Guard) armies. The Austrians had dispensed with heavy breastplates in 1860[17] and formally abolished the cuirassiers as a branch of their cavalry in 1868.[18] By the end of the 19th century, the German and Russian cuirassiers used the breastplates only as part of their peacetime parade dress,[19] but the French regiments still wore the cuirass (with a cloth cover) and plumed helmet on active service during the first weeks of World War I. Amongst ceremonial units the Spanish Escolta Real (Royal Escort) Squadron,[20] the Argentinian Presidential Bodyguard,[21] and the Italian Cuirassier (Corazzieri) Corps[22] all wore cuirasses as part of their mounted full dress during the early years of the 20th century.

The retention of cuirasses as part of their field uniform by the French Army in 1914 reflected the historic prestige of this branch of the cavalry, dating back through the Franco-Prussian War to the campaigns of Napoleon. Before the war, it had been argued within the army that the cuirass should be limited to parade dress but upon mobilisation in 1914 the only concession made to active service was the addition of a cover of brown or blue cloth over the shining steel and brass to make the wearer less visible. Within a few weeks, most French regiments stopped wearing the cuirass, as it served no real purpose in this new war. It was not however formally withdrawn until October 1915.[23]

The Russian and German cuirassiers ceased to exist when the Imperial armies in both countries were disbanded; respectively in 1917 (due to the revolution) and in 1918 (due to the Treaty of Versailles). The French cuirassiers continued in existence after World War I, although without their traditional armour and reduced in numbers to only the six regiments that had been most decorated during the war. Five of these units had achieved their distinctions serving as "cuirassiers à pied" or dismounted cavalry in the trenches. The surviving cuirassier regiments were amongst the first mounted cavalry in the French Army to be mechanised during the 1930s. One cuirassier regiment still forms part of the French Army.

The development of firearms, which reduced the effectiveness of expensive heavy armour, led to a considerable reduction of the size and complexity of the latter. This form of protection was reduced in the latter half of the 17th century to the breastplate and the helmet, both of which eventually became largely decorative against projectiles but still retained their effectiveness against swords, lances, and bayonets.