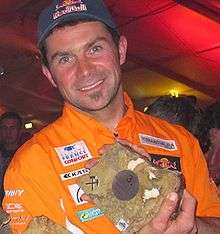 On January 10, 2012, at the 2012 Dakar Rally, Portuguese pilot Paulo Gonçalves pulled Despres out of the mud but Cyril did not return the favour. Out of 7 riders all but the Spaniard Marc Coma got stuck, the organisers therefore changed the course. At the end of the stage, the time lost was credited to Despres. Goncalves received a penalty of 6 hours for receiving external help. Coma was not credited the time he lost by going around the mudhole.[5][6][7][8][9]

After a closely fought battle with his KTM teammate, Spaniard Marc Coma for the victory, Despres got back into the lead on the penultimate stage (Stage 13) thanks to a mechanical failure on Coma's bike. Despres managed to maintain the lead until the end of the rally. Thus Cyril Despres gained his fourth overall victory on the Dakar Rally, equaling former Honda and Cagiva rider, Italian Edi Orioli's performance.

A new chapter began in his Dakar career in 2015 when he joined the Peugeot team as a driver alongside Carlos Sainz and Stéphane Peterhansel, who previously switched from the motorbike to car category with great success. His co-driver was Gilles Picard. Despres/Picard finished 34th, in 2016 Despres came in 7th overall, his co-driver was David Castera.[10]