D. S. Senanayake College is a leading public national school in Sri Lanka, named after the first Prime Minister of Independent Sri Lanka, Don Stephen Senanayake. It was established on February 10, 1967 under the stewardship of Ralph Ignatius Thomas "R. I. T." Alles.[1][2] As a national school it is controlled by the central government, as opposed to a provincial council. D. S. Senanayake College is well known island-wide for it's discipline and is considered the best disciplined school in Sri Lanka. It's the only multi-ethnic tri-lingual school established in the post-independence era and is the largest multi-ethnic school on the island. 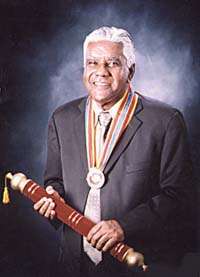 R. I. T. Alles was the founding principal

D. S. Senanayake College, situated in Colombo 07 (Gregory road), Sri Lanka. School has current enrollment of over 6000 students with an academic staff over 275. The school is listed among the National Schools, which come under the administration of the Ministry of Education, thus has direct funding from the ministry.

The College provides education to students from Grade 1 to 13 in Sinhala, Tamil and English language. It also provides Mathematics, Science, Commerce & Arts fields for the Advance Level Examinations. The school is fully equipped with Modern Classrooms, Multiple Science Laboratories and Computer Laboratories, Grounds & Sports Complex for sports activities. It also has more than 35 Clubs, Societies & Associations engaged in all types of co-curricular activities. There are wide range of sporting activities.it is rated as one of the most popular and well desciplined schools in the country,D.S.S.C is also known for helping poor schools

In 1965 the number of requests to admit children into the Royal College Primary had become excessive. Thus the Minister of Education I. M. R. A. Iriyagolla took the initiative to build a new school in Cinnamon Gardens on the lines of Royal College, Colombo.[3] In 1967 Minister Iriyagolla began the ground work for establishing the school. It was named after D. S. Senanayake, who was the first prime minister of Sri Lanka (then Ceylon) after gaining independence. R. I. T. Alles, an assistant principal at Royal College became the Head Master of the new school. The location in which the college stands today was at that time called the Kumbikale jungle.[4]

Students are placed in one of four houses according to their admission number.They compete each year to win the Inter-house Competitions. 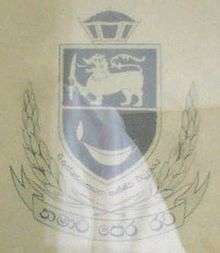 Sinhala version of School anthem was composed by Navarathna Attanayake and the lyrics are by Premakeerthi de Alwis. Tamil version of the school anthem was written by Sillayoor Selvarajah.The anthem is recited every morning in school days and well respected among students.

The Coat of Arms is a shield which is partitioned into two parts. The upper section has the lion of the Sri Lankan flag and the lower section has an oil lamp. A wreath of paddy is partially encircling the shield and the motto Country Before Self is in a scroll. Some decades back, the crown of the Kandyan monarch which is depicted in the crest of Royal College Colombo, was depicted in the school's crest as well.

Main article: List of clubs and associations in DSSC

The Government of Sri Lanka offered a building previously occupied by the Crime Investigation Bureau in 2003. After renovating the building the school hostel was opened in January 2003.