The Daily Worker was a newspaper published in New York City by the Communist Party USA, a formerly Comintern-affiliated organization. Publication began in 1924.[1] While it generally reflected the prevailing views of the party, some attempts were made to reflect a broader spectrum of left-wing opinion. At its peak, the newspaper achieved a circulation of 35,000. Notable contributors to its pages included Robert Minor and Fred Ellis (cartoonists), Lester Rodney (sports editor), David Karr, Richard Wright, John L. Spivak, Peter Fryer, Woody Guthrie and Louis Budenz.

The ancestry of the Daily Worker goes back to the weekly Ohio Socialist published by the Socialist Party of Ohio out of Cleveland from 1917 to November 1919. The Ohio party joined the nascent Communist Labor Party of America at the 1919 Emergency National Convention.

The Ohio Socialist became Toiler in November 1919. In 1920, with the CLP going underground, Toiler became the party's "aboveground" newspaper published by "The Toiler Publishing Association." It remained as the Cleveland aboveground publication of the CLP and its successors until February 1922.

In December 1921 the "aboveground" Workers Party of America was founded and the Toiler merged with Workers Council of the Workers' Council of the United States to found the six page weekly The Worker.

The Ohio Socialist only used whole numbers. Its final issue was #94 November 19, 1919. The Toiler continued this numbering, even though a typographical error made its debut issue #85 November 26, 1919. Beginning sometime in 1921 the volume number IV was added, perhaps reflecting the publications fourth year in print, though its issue numbers continued the whole number scheme. The final edition of the Toiler was Vol IV #207 January 28, 1922. The Worker continued the Toilers numbering during its run Vol. IV #208 February 2, 1922 to Vol. VI #310 January 12, 1924. The first edition of Daily worker was numbered Vol. I #311.[2] 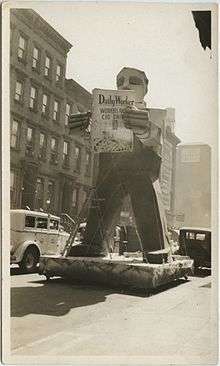 May Day parade float with statue reading the “Daily Worker”

In politics, the Daily Worker consistently adhered to a Stalinist party line from the time of Joseph Stalin's rise to power in the Soviet Union. The paper maintained a series of correspondents in Moscow, including Vern Smith in the middle 1930s, who invariably depicted Soviet reality in the most favorable light. The paper upheld the verdicts of the Moscow trials, widely criticized at the time as show trials, and later exposed as having used fabricated evidence and extorted confessions. The Daily Worker's editorials constantly criticized any and all opponents of Stalinist socialism, including other communists, such as Leon Trotsky, who was assassinated at Stalin's order in 1940.

Beginning in the Popular Front period of the 1930s, when the party proclaimed that "Communism is Twentieth Century Americanism" and characterized itself as the heirs to the tradition of Washington and Lincoln, the paper broadened its coverage of the arts and entertainment. In 1935 it established a sports page, with contributions from David Karr, the page was edited and frequently written by Lester Rodney. The paper's sports coverage combined enthusiasm for baseball with the usual Marxist social critique of capitalist society and bourgeois attitudes, and today is primarily noted for consistently advocating the desegregation of professional sports.

The Daily Worker had constant financial and distribution problems. Many newsstands and stores would not carry the paper. The revelations of Soviet MVD spy rings inside the U.S. government, the 1945 revelations of Daily Worker managing editor Louis Budenz, a self-admitted recruiter of agents for the Soviet NKVD (forerunner of the MVD and KGB), combined with the resultant intense anti-communism of the 1950s (labeled McCarthyism) caused a large drop in the paper's circulation.

The membership of the American Communist Party had fallen to around 20,000 in 1956, when Khrushchev's speech to the 20th Congress of the CPSU (the "Secret Speech") on the personality cult of Stalin became known. The paper printed articles in support for the early stages of the 1956 Hungarian Revolution, a popular revolt by the Hungarian people against continued domination by the Soviet Union, which had installed a puppet regime, the János Kádár government, in Budapest and had begun to persecute its political opponents. The Daily Worker's editor, John Gates opened the paper for discussion of the topic, a novel event for a party-line newspaper, and one appeared to promise further liberalization and dialogue inside the Communist Party in the United States.

Despite widespread dissension in the CPUSA, the paper finally endorsed Moscow's suppression of the Hungarian uprising. In the disruptions that followed, about half of the remaining party membership left the party, including Gates and many staff members of the Daily Worker. Owing to greatly reduced operating income associated with a reduced membership, the CPUSA was forced to cease publication of a daily paper, with the final issue of the Daily Worker appearing on January 13, 1958.[3]

After a short hiatus, the party published a weekend paper called The Worker from 1958 until 1968. A Tuesday edition called The Midweek Worker was added in 1961 and also continued until 1968, when production was accelerated. According to ex-CIA agent Philip Agee, a large number of subscribers during this period were CIA agents or front companies linked to the CIA. Agee claimed that the CIA's funding in this manner prevented the Worker from having to cease publication.

Two newspapers and a merger

In 1968 the Communist Party resumed publication of a New York daily paper, now titled The Daily World. In 1986, the paper merged with the party's West Coast weekly paper, the People's World, which had been slightly less closely hewed to the Moscow political line as the New York party organization and paper had been. The new People’s Daily World published from 1987 until 1991, when daily publication was abandoned.

The paper cut back to a weekly issue and was retitled People's Weekly World (later retitled to People's World as to de-emphasize the weekly component), which remains the paper of the Communist Party USA today. Print publication of the People's World ceased in 2010 in favor of an online edition.

Currently (2012), People's World claims that, "Peoplesworld.org is a daily news website of, for and by the 99% and the direct descendant of the Daily Worker." Its publisher is Long View Publishing Company. The online newspaper is a member of the International Labor Communications Association and is indexed in the Alternative Press Index. Its staff belong to the Newspaper Guild/CWA, AFL-CIO.[4]

Before the Party established the Workers Library Publishers in late 1927, the party used to Daily Worker Publishing Company imprint to publishes its pamphlets.