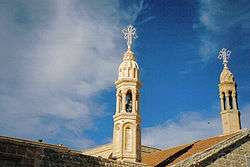 Dayro d-Mor Gabriel (Syriac: ܕܝܪܐ ܕܡܪܝ ܓܒܪܐܝܠ‎; The Monastery of St. Gabriel), also known as Deyrulumur, is the oldest surviving Syriac Orthodox monastery in the world. It is located on the Tur Abdin plateau near Midyat in the Mardin Province in southeastern Turkey.[1] It has been involved in a dispute with the Turkish government that threatened its existence. 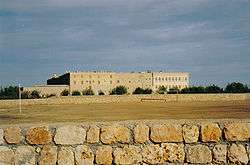 The functional main accommodation block of Dayro d-Mor Gabriel, emphasising its role as a working community

Dayro d-Mor Gabriel was founded in 397 by Mor Shmu'el (Samuel) and his student Mor Shem'un (Simon) on the ruins of an ancient Assyrian temple.[2] The monastery's importance grew and by the 6th century there were over 1000 local and Coptic monks there. The monastery became so famous that it received contributions from Roman Emperors, such as Arcadius, Honorius, Theodosius II and Anastasius.[3] Between 615 and 1049 the Episcopal seat of Tur Abdin was based here and from 1049 until 1915 the monastery had its own diocese.

In the 7th century, the monastery became known as Monastery of St Gabriel, who was famous for his ascetic life. In the fourteenth century four hundred and forty monks were killed by invading Mongols.[4] In 1991, the remains of monks killed by Timur (Tamerlane) were found in caves underneath the monastery, dated to the year 1401.[5] During the Assyrian Genocide the monks were massacred by Kurds and the monastery was occupied for four years until returned to the church in 1919.[6]

The monastery is an important center for the Syrian Christians of Tur Abdin with around fifteen nuns and two monks occupying separate wings, as well as a fluctuating number of local lay workers and guests from overseas. It maintained a significant library however, almost nothing remains. The monastery is currently the seat of the metropolitan bishop of Tur Abdin. In its history the monastery has produced many high-ranking clerics and scholars, among them, four patriarchs, a Maphrian and 84 bishops.

Dayro d-Mor Gabriel is a working community set amongst gardens and orchards, and somewhat disfigured by 1960s residential accommodation. The monastery's primary purpose is to keep Syriac Orthodox Christianity alive in the land of its birth by providing schooling, ordination of native-born monks. On occasions it has provided physical protection to the Christian population.

Dayro d-Mor Gabriel is open to visitors, and it is possible to stay with permission, but is closed after dark.

Dispute with the Turkish government

In the last decade the monastery has been involved in a land dispute with the Turkish government and Kurdish village leaders, particularly those linked to the Çelebi tribe,[7] backed by local representatives of the ruling Justice and Development Party.[8] Turkish government assistance to the Kurds is seen as retaliation against the Syriac diaspora for lobbying for international recognition of the killings of tens of thousands of Syriacs during World War I as genocide.[9] Their attempts to confiscate land owned by the monastery has garnered attention from many European governments, has gathered opposition to Turkey's EU bid, and could be the basis of a case by the monastery at the European Court of Human Rights. Otmar Oehring from Missio, a German Catholic charity, has said that the cases mean that “the state's actions suggest it wishes that the monastery no longer existed.”[7]

The then Turkish prime minister Erdoğan announced on 30 September 2013 that the land would be returned to the Syriac community in Turkey.[12] This decision was approved a week later (7 October) by the Prime Ministry Directorate General of Foundations. A land registration process of two months would begin and was subject to approval.[13]