Anastasius I (Latin: Flavius Anastasius Augustus, Greek: Ἀναστάσιος; c. 431 – 9 July 518) was Eastern Roman Emperor from 491 to 518. His reign was characterized by substantive accomplishments, which were representative of emerging patterns of government, economy, and bureaucracy in the Eastern Roman empire.[1] In addition, Anastasius I is known for leaving the imperial government with a sizable budget surplus due to minimization of government corruption, reforms to the tax code, and the introduction of a new form of currency.[2]

Anastasius was born at Dyrrachium, the date is unknown, but he is thought to have been born no later than 430 or 431. He was born into an Illyrian family,[3] the son of Pompeius (born c. 410), nobleman of Dyrrachium, and wife Anastasia Constantina (born c. 410). His mother was an Arian, sister of Clearchus, also an Arian, and a paternal granddaughter of Gallus (born c. 370), son of Anastasia (born c. 352) and husband, in turn daughter of Flavius Claudius Constantius Gallus and wife and cousin Constantina.[4] Before becoming emperor, Anastasius was a particularly successful administrator in the department of finance.[5]

Anastasius had one eye black and one eye blue (heterochromia),[6] and for that reason he was nicknamed Dicorus (Greek: Δίκορος, "two-pupiled").

Following the death of Zeno (491), there is strong evidence that many Roman citizens wanted both a Roman and an Orthodox Christian emperor. In the weeks following Zeno's death, crowds gathered in Constantinople exclaiming "Give the Empire an Orthodox Emperor! Give the Empire a Roman Emperor!" [5] Under such pressure, Ariadne, Zeno's widow, turned to Anastasius I. Anastasius was in his sixties at the time of his ascension to the throne. Religiously, he was fairly overt in his sympathy for the Monophysites.[2] Consequently, as a condition of his rule, the Patriarch of Constantinople required that he pledge not to repudiate the Council of Chalcedon.[7] It is noteworthy that Ariadne chose Anastasius over Zeno's brother Longinus,[2] who was arguably the more logical choice. The decision upset the Isaurians, but it also was not appreciated by the Blues and the Greens who had been patronized by Longinus. The Blues and Greens subsequently showed a tendency to riot and cause mayhem.[2]

Ariadne married Anastasius shortly after his accession on 20 May 491. His reign, though afterwards disturbed by foreign and internecine wars and religious distractions, commenced auspiciously. He gained the popular favour by a judicious remission of taxation, and displayed great vigour and energy in administering the affairs of the Empire.

The Isaurian War (492-497) was stirred up by the Isaurian supporters of Longinus (consul 486), (the brother of Zeno) who was passed over in his succession in favor of Anastasius. The battle of Cotyaeum in 492 "broke the back" of the revolt, but guerrilla warfare continued in the Isaurian mountains for some years longer. The warfare in the mountains seems to have been stalemated due largely to the Isaurians retaining of the Papirius Castle.[1] Importantly, though this war lasted five years, Anastasius passed legislation related to the economy in the mid-490s, suggesting that the Isaurian War did not absorb all of the energy and resources of the government.[1]

In the Anastasian War (502–505), Theodosiopolis and Amida were captured by the Sassanids, but Persian provinces also suffered severely and the Byzantines recovered Amida. Both adversaries were exhausted when peace was made in 506 on the basis of the status quo. Anastasius afterwards built the strong fortress of Daras to hold the Persians in check in Nisibis. The Balkan provinces were left denuded of troops, however, and were devastated by invasions of Slavs and Bulgars; to protect Constantinople and its vicinity against them, the emperor built the Anastasian Wall, extending from the Propontis to the Euxine. 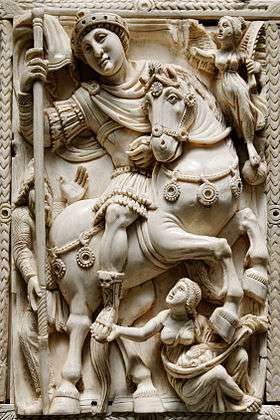 The Barberini ivory, a 6th-century ivory diptych representing either Anastasius or Justinian I.

The Emperor was a convinced Miaphysite, following the teachings of Cyril of Alexandria and Severus of Antioch who taught "One Incarnate Nature of Christ" in an undivided union of the Divine and human natures, but his ecclesiastical policy was moderate; he endeavoured to maintain the principle of the Henotikon of Zeno and the peace of the church. Yet, in 512, perhaps emboldened after his military success against the Persians, Anastasius I deposed the Patriarch of Chalcedon and replaced him with a Monophysite; violating his agreement with the Patriarch of Constantinople and precipitating riots in Chalcedon.[2] The following year, Vitalian started a rebellion, quickly defeating an imperial army and marching on Constantinople.[2] With the army closing in, Anastasius I gave Vitalian the title of commander of the Army of Thrace and began communicating with the pope regarding a potential end to the Acacian schism.[2] Two years later, general Marinus attacked Vitalian and forced him and his troops to the Northern part of Thrace. Following the end of this conflict, Emperor Anastasius had undisputed control of the Empire until his death in 518.[8]

Additionally, during his reign, the Roman eastern frontier underwent extensive re-fortification, including the construction of Dara, a stronghold intended to counter the Persian fortress of Nisibis. Also during his reign, one of the most fortified castle cities on the Adriatic, Durrës Castle in Durrës, was constructed.

Though a Christian; he was the last Roman Emperor to be deified on his death.

The Anonymous Valesianus tells an account about his choosing of a successor: Anastasius could not decide which of his three nephews should succeed him, so he put a message under a couch and had his nephews take seats in the room, which also had two other seats; he believed that the nephew to sit on the special couch would be his proper heir. However, two of his nephews sat on the same couch, and the one with the concealed message remained empty.

Then, after putting the matter to God in prayer, he determined that the first person to enter his room the next morning should be the next Emperor, and that person was Justin, the chief of his guards. In fact, Anastasius probably never thought of Justin as a successor, but the issue was decided for him after his death. At the end of his reign, he left the Imperial treasury with 23,000,000 solidi or 320,000 pounds of gold.[9][10]

Anastasius died childless in Constantinople on 9 July 518 (some sources say 8 or 10 July) and was buried at the Church of the Holy Apostles.

Anastasius is known to have had a brother named Flavius Paulus, who served as Roman consul in 496.[11] A sister-in-law, known as Magna, was mother to Irene and mother-in-law to Olybrius. This Olybrius was son of Anicia Juliana and Areobindus Dagalaiphus Areobindus.[12] The daughter of Olybrius and Irene was named Proba. She married Probus and was mother to a younger Juliana. This younger Juliana married another Anastasius and was mother of Areobindus, Placidia, and a younger Proba.[13] Another nephew of Anastasius was Flavius Probus, Roman consul in 502.[14] Caesaria, sister of Anastasius, married Secundinus, and were parents to Hypatius and Pompeius.[14] Flavius Anastasius Paulus Probus Moschianus Probus Magnus, Roman Consul in 518 also was a great-nephew of Anastasius. His daughter Juliana later married Marcellus, a brother of Justin II.[13] The extensive family may well have included viable candidates for the throne.[15]

Anastasius is famous for showing an uncommon interest in administrative efficiency and issues concerning the economy.[8] Firstly, whenever it was possible in governmental transactions, he altered the method of payment from goods to hard currency. This practice decreased the potential for embezzlement and the need for transportation and storage of supplies. It also allowed for easier accounting.[2] The emperor applied this practice to taxes as well — he mandated that taxes be paid with cash rather than with goods.[2] He also eliminated the practice of providing soldiers with their arms and uniforms; instead he allotted each soldier a generous amount of money that was more than enough to pay for arms and uniforms.[2] These alterations to imperial policy seem to have worked exceptionally well; taxpayers often faced a lesser amount of taxes than they had before and the government gained revenue.[2] Importantly, the increase in revenue allowed the emperor to pay soldiers a higher wage, which attracted native Byzantine soldiers to the military (as opposed to the unreliable Barbarian and Isaurian groups that some previous emperors were forced to rely on).[16] In general, given these alterations to governmental policy and their positive effect on governmental revenue, Anastasius is often cited for his "prudent management" of the empire's finances.[17]

Yet amidst all these reforms, Anastasius I continued the practice of selling official positions.[1] In fact, he sold enough official positions that he has been accused of having facilitated the creation of a civilian aristocracy; a claim that is strengthened by the growth in influence of families that often held high level positions in the government such as the Appiones from Egypt.[1] Anastasius I also gave official positions to his close friend general Celer, his brother-in-law, his brother, his nephews, and his grand-nephews.[1] This can be considered noteworthy given that the emperor seems to have minimized government corruption/inefficiency in other areas.

In addition, the main elements of the complex monetary system of the early Byzantine Empire, which suffered a partial collapse in the 5th century, were revived by Emperor Anastasius I (491–518) in 498. The new system involved three denominations of gold (the solidus and its half and third) and five of copper (the follis, worth 40 nummi and its fractions down to a nummus). It would seem that the new forms of currency quickly became an important part of trade with other regions. Indeed, a follis coin has been found as far as the Charjou desert in the middle of the Amudarya.[18] It also appears that some Byzantine trading partners may have attempted to replicate coins of Anastasius; a theory strengthened by the fact that four solidi from his reign have been recovered as far from the Byzantine Empire as China. China might seem an unlikely trading partner, but the Byzantines and the Chinese were probably able to do business via Central Asian merchants traveling along the Silk Roads.[18] Thus, the currency created by Anastasius proved to circulate widely and retain influence well after his reign.

A 40 nummi coin of Anastasius is depicted on the obverse of the Macedonian 50 denars banknote, issued in 1996.[19]