The Declaration of Neutrality was a declaration by the Austrian Parliament declaring the country permanently neutral. It was enacted on 26 October 1955 as a constitutional act of parliament, i.e., as part of the Constitution of Austria.

Formally, the declaration was promulgated voluntarily by the Republic of Austria. Politically, it was the direct consequence of the allied occupation by the Soviet Union, the United States, the United Kingdom, and France between 1945 and 1955, from which the country was freed by the Austrian State Treaty of 15 May the same year. The Soviet Union would not have agreed to the State Treaty if Austria had not committed herself to declare her neutrality after the allied forces had left the country.[1] 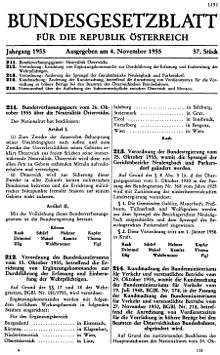 The Bundesgesetzblatt containing the Federal Constitutional Law on the Neutrality of Austria.

Since 1955,[2] neutrality has become a deeply ingrained element of Austrian identity. Austria's national holiday on 26 October commemorates the declaration. Legally, Austrian neutrality is both part of the Austrian constitution and of international law. There is an ongoing debate among legal scholars whether Austria could change this neutral status on its own account. This is a moot point, however, since there is no political or popular support for doing so.

Austria engages in UN-led peacekeeping and other humanitarian missions. It participates in:

This article is issued from Wikipedia - version of the 11/2/2015. The text is available under the Creative Commons Attribution/Share Alike but additional terms may apply for the media files.