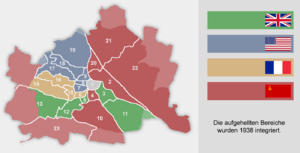 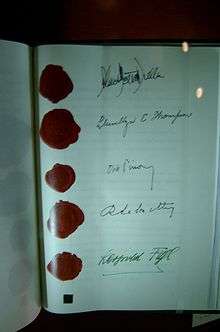 Österreichischer Staatsvertrag ) or Austrian Independence Treaty re-established Austria as a sovereign state. It was signed on 15 May 1955 in Vienna, at the Schloss Belvedere among the Allied occupying powers (France, the United Kingdom, the United States, and the Soviet Union) and the Austrian government. It officially came into force on 27 July 1955.

Its full title is "Treaty for the re-establishment of an independent and democratic Austria, signed in Vienna on the 15 May 1955" (German: Staatsvertrag betreffend die Wiederherstellung eines unabhängigen und demokratischen Österreich, unterzeichnet in Wien am 15. Mai).

The treaty re-established a free, sovereign and democratic Austria. The basis for the treaty was the Moscow Declaration of October 30, 1943.

9 parts of the treaty

First attempts to negotiate a treaty were made by the first post-war government. However, they failed because the Allies wanted to see a peace treaty with Germany first. A treaty became less likely with the development of the Cold War. However, Austria successfully held its part of Carinthia against the demands of a resurgent Federal People's Republic of Yugoslavia, even though the issue of potential reunification with South Tyrol, annexed by Italy from Austria-Hungary in 1919, was not addressed. The climate for negotiations improved with Joseph Stalin's death in 1953, and negotiations with the Soviet foreign minister, Molotov, secured the breakthrough in February 1955.

Important points in the treaty

As well as general regulations and recognition of the Austrian state, the minority rights of the Slovene and Croat minorities were also expressly detailed. Anschluss (political union) with the new Germany, as had happened in 1938, was forbidden. Nazi and fascist organisations were prohibited.

Furthermore, Austria announced that it would declare itself permanently neutral after the enactment of the treaty. The USSR had expressed its wish for such a declaration of neutrality as a guarantee that Austria would not join NATO after Soviet troops had been withdrawn. Austrian neutrality is actually not in the original text of the treaty but was declared by parliament on 26 October 1955, after the last allied troops were to leave Austria according to the treaty.

As a result of the treaty the Allies left Austrian territory on 25 October 1955. 26 October came to be celebrated as a national holiday (called the Day of the Flag until 1965). It is sometimes thought to commemorate the withdrawal of Allied troops, but in fact celebrates Austria's Declaration of Neutrality, which was passed on 26 October 1955.