Demand is a buyer's willingness and ability to pay a price for a specific quantity of a good or service. Demand refers to how much (quantity) of a product or service is desired by buyers at various prices.[1] The quantity demanded is the amount of a product people are willing or able to buy at a certain price; the relationship between price and quantity demanded is known as the demand.[2] (see also supply and demand). The term demand signifies the ability and willingness to buy a particular commodity at a given point of time, assuming other variables remain constant. Utility preferences and choices underlying demand can be represented as functions of cost, benefit, odds and other variables.

Innumerable factors and circumstances could affect a buyer's willingness or ability to buy a good. Some of the more common factors are:

Good's own price: The basic demand relationship is between potential prices of a good and the quantities that would be purchased at those prices. Generally the relationship is negative meaning that an increase in price will induce a decrease in the quantity demanded. This negative relationship is embodied in the downward slope of the consumer demand curve. The assumption of a negative relationship is reasonable and intuitive. If the price of a new novel is high, a person might decide to borrow the book from the public library rather than buy it.
Price of related goods: The principal related goods are complements and substitutes. A complement is a good that is used with the primary good. Examples include hotdogs and mustard, beer and pretzels, automobiles and gasoline. (Perfect complements behave as a single good.) If the price of the complement goes up the quantity demanded of the other good goes down. Mathematically, the variable representing the price of the complementary good would have a negative coefficient in the demand function. For example, Qd = a - P - Pg where Q is the quantity of automobiles demanded, P is the price of automobiles and Pg is the price of gasoline. The other main category of related goods are substitutes. Substitutes are goods that can be used in place of the primary good. The mathematical relationship between the price of the substitute and the demand for the good in question is positive. If the price of the substitute goes down the demand for the good in question goes down.
Personal Disposable Income: In most cases, the more disposable income (income after tax and receipt of benefits) a person has the more likely that person is to buy.
Tastes or preferences: The greater the desire to own a good the more likely one is to buy the good. There is a basic distinction between desire and demand. Desire is a measure of the willingness to buy a good based on its intrinsic qualities. Demand is the willingness and ability to put one's desires into effect. It is assumed that tastes and preferences are relatively constant.
Consumer expectations about future prices, income and availability: If a consumer believes that the price of the good will be higher in the future, he/she is more likely to purchase the good now. If the consumer expects that his/her income will be higher in the future, the consumer may buy the good now. Availability (supply side) as well as predicted or expected availability also affects both price and demand.
Population: If the population grows this means that demand will also increase.
Nature of the good: If the good is a basic commodity, it will lead to a higher demand

The demand equation is the mathematical expression of the relationship between the quantity of a good demanded and those factors that affect the willingness and ability of a consumer to buy the good. For example, Qd = f(P; Prg, Y) is a demand equation where Qd is the quantity of a good demanded, P is the price of the good, Prg is the price of a related good, and Y is income; the function on the right side of the equation is called the demand function. The semi-colon in the list of arguments in the demand function means that the variables to the right are being held constant as one plots the demand curve in (quantity, price) space. A simple example of a demand equation is Qd = 325 - P - 30Prg + 1.4Y. Here 325 is the repository of all relevant non-specified factors that affect demand for the product. P is the price of the good. The coefficient is negative in accordance with the law of demand. The related good may be either a complement or a substitute. If a complement, the coefficient of its price would be negative as in this example. If a substitute, the coefficient of its price would be positive. Income, Y, has a positive coefficient indicating that the good is a normal good. If the coefficient was negative the good in question would be an inferior good meaning that the demand for the good would fall as the consumer's income increased. Specifying values for the non price determinants, Prg = 4.00 and Y = 50, results in the demand equation Q = 325 - P - 30(4) +1.4(50) or Q = 275 - P. If income were to increase to 55 the new demand equation would be Q = 282 - P. Graphically this change in a non price determinant of demand would be reflected in an outward shift of the demand function caused by a change in the x intercept. 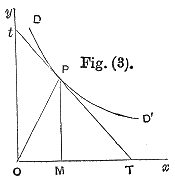 In economics, the demand curve is the graph depicting the relationship between the price of a certain commodity and the amount of it that consumers are willing and able to purchase at that given price.

PED is a measure of the sensitivity of the quantity variable, Q, to changes in the price variable, P. Elasticity answers the question of the percent by which the quantity demanded will change relative to (divided by) a given percentage change in the price. For infinitesimal changes the formula for calculating PED is the absolute value of (∂Q/∂P)×(P/Q).

The overriding factor in determining PED is the willingness and ability of consumers after a price changes to postpone immediate consumption decisions concerning the good and to search for substitutes (wait and look).

where a and c are parameters, and the constant price elasticity is c and

Market structure and the demand curve

Is the demand curve for PC firm really flat?

Practically every introductory microeconomics text describes the demand curve facing a perfectly competitive firm as being flat or horizontal. A horizontal demand curve is perfectly elastic. If there are n identical firms in the market then the elasticity of demand PED facing any one firm is

Negative demand: If the market response to a product is negative, it shows that people are not aware of the features of the service and the benefits offered. Under such circumstances, the marketing unit of a service firm has to understand the psyche of the potential buyers and find out the prime reason for the rejection of the service. For example: if passengers refuse a bus conductor's call to board the bus. The service firm has to come up with an appropriate strategy to remove the misunderstandings of the potential buyers. A strategy needs to be designed to transform the negative demand into a positive demand.

No demand: If people are unaware, have insufficient information about a service or due to the consumer's indifference this type of a demand situation could occur. The marketing unit of the firm should focus on promotional campaigns and communicating reasons for potential customers to use the firm's services. Service differentiation is one of the popular strategies used to compete in a no demand situation in the market.

Latent demand: At any given time it is impossible to have a set of services that offer total satisfaction to all the needs and wants of society. In the market there exists a gap between desirables and the availables. There is always a search on for better and newer offers to fill the gap between desirability and availability. Latent demand is a phenomenon of any economy at any given time, it should be looked upon as a business opportunity by service firms and they should orient themselves to identify and exploit such opportunities at the right time. For example, a passenger traveling in an ordinary bus dreams of traveling in a luxury bus. Therefore, latent demand is nothing but the gap between desirability and availability.

Seasonal demand:Some services do not have an all year round demand, they might be required only at a certain period of time. Seasons all over the world are very diverse. Seasonal demands create many problems to service organizations, such as:- idling the capacity, fixed cost and excess expenditure on marketing and promotions. Strategies used by firms to overcome this hurdle are like - to nurture the service consumption habit of customers so as to make the demand unseasonal, or other than that firms recognize markets elsewhere in the world during the off-season period. Hence, this presents and opportunity to target different markets with the appropriate season in different parts of the world. For example, the need for Christmas cards comes around once a year. Or the, seasonal fruits in a country.

Demand patterns need to be studied in different segments of the market. Service organizations need to constantly study changing demands related to there service offerings over various time periods. They have to develop a system to chart these demand fluctuations, which helps them in predicting the demand cycles. Demands do fluctuate randomly, therefore, they should be followed on a daily, weekly or a monthly basis.

E. F. Schumacher challenges the prevailing economic assumption that fulfilling demand is the purpose of economic activity, offering a framework of what he calls "Buddhist economics" in which wise demands, fulfilling genuine human needs, are distinguished from unwise demands, arising from the five intellectual impairments recognized by Buddhism:[12]

The cultivation and expansion of needs is the antithesis of wisdom. It is also the antithesis of freedom and peace. Every increase of needs tends to increase one’s dependence on outside forces over which one cannot have control, and therefore increases existential fear. Only by a reduction of needs can one promote a genuine reduction in those tensions which are the ultimate causes of strife and war.[13]

Demand reduction refers to efforts aimed at reducing the public desire for illegal and illicit drugs. The drug policy is in contrast to the reduction of drug supply, but the two policies are often implemented together.

Energy demand management, also known as demand-side management (DSM) or demand-side response (DSR), is the modification of consumer demand for energy through various methods such as financial incentives and behavioral change through education.