For the avenue in Barcelona, see Avinguda Diagonal. 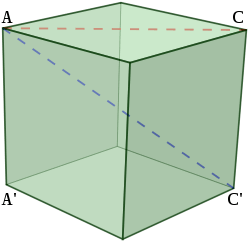 The diagonals of a cube with side length 1. AC' (shown in blue) is a space diagonal with length

, while AC (shown in red) is a face diagonal and has length

In geometry, a diagonal is a line segment joining two vertices of a polygon or polyhedron, when those vertices are not on the same edge. Informally, any sloping line is called diagonal. The word "diagonal" derives from the ancient Greek διαγώνιος diagonios,[1] "from angle to angle" (from διά- dia-, "through", "across" and γωνία gonia, "angle", related to gony "knee"); it was used by both Strabo[2] and Euclid[3] to refer to a line connecting two vertices of a rhombus or cuboid,[4] and later adopted into Latin as diagonus ("slanting line").

In matrix algebra, a diagonal of a square matrix is a set of entries extending from one corner to the farthest corner.

There are also other, non-mathematical uses. 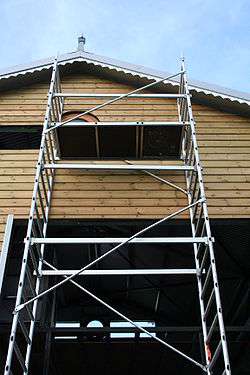 A stand of basic scaffolding on a house construction site, with diagonal braces to maintain its structure

In engineering, a diagonal brace is a beam used to brace a rectangular structure (such as scaffolding) to withstand strong forces pushing into it; although called a diagonal, due to practical considerations diagonal braces are often not connected to the corners of the rectangle.

Diagonal pliers are wire-cutting pliers defined by the cutting edges of the jaws intersects the joint rivet at an angle or "on a diagonal", hence the name.

A diagonal lashing is a type of lashing used to bind spars or poles together applied so that the lashings cross over the poles at an angle.

In association football, the diagonal system of control is the method referees and assistant referees use to position themselves in one of the four quadrants of the pitch. 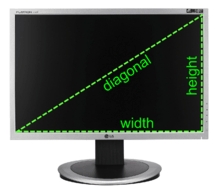 The diagonal is a common measurement of display size.

As applied to a polygon, a diagonal is a line segment joining any two non-consecutive vertices. Therefore, a quadrilateral has two diagonals, joining opposite pairs of vertices. For any convex polygon, all the diagonals are inside the polygon, but for re-entrant polygons, some diagonals are outside of the polygon.

diagonals, as each vertex has diagonals to all other vertices except itself and the two adjacent vertices, or n − 3 diagonals, and each diagonal is shared by two vertices.

In a convex polygon, if no three diagonals are concurrent at a single point, the number of regions that the diagonals divide the interior into is given by

In the case of a square matrix, the main or principal diagonal is the diagonal line of entries running from the top-left corner to the bottom-right corner.[7][8][9] For a matrix

with row index specified by

and column index specified by

, these would be entries

. For example, the identity matrix can be defined as having entries of 1 on the main diagonal and zeroes elsewhere:

A superdiagonal entry is one that is directly above and to the right of the main diagonal.[12][13] Just as diagonal entries are those

, the superdiagonal entries are those with

. For example, the non-zero entries of the following matrix all lie in the superdiagonal:

Likewise, a subdiagonal entry is one that is directly below and to the left of the main diagonal, that is, an entry

.[14] General matrix diagonals can be specified by an index

; and in general, the

-diagonal consists of the entries

By analogy, the subset of the Cartesian product X×X of any set X with itself, consisting of all pairs (x,x), is called the diagonal, and is the graph of the equality relation on X or equivalently the graph of the identity function from X to x. This plays an important part in geometry; for example, the fixed points of a mapping F from X to itself may be obtained by intersecting the graph of F with the diagonal.

In geometric studies, the idea of intersecting the diagonal with itself is common, not directly, but by perturbing it within an equivalence class. This is related at a deep level with the Euler characteristic and the zeros of vector fields. For example, the circle S1 has Betti numbers 1, 1, 0, 0, 0, and therefore Euler characteristic 0. A geometric way of expressing this is to look at the diagonal on the two-torus S1xS1 and observe that it can move off itself by the small motion (θ, θ) to (θ, θ + ε). In general, the intersection number of the graph of a function with the diagonal may be computed using homology via the Lefschetz fixed point theorem; the self-intersection of the diagonal is the special case of the identity function.