Not to be confused with Curved line segment. 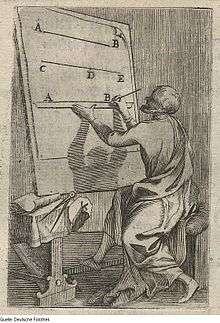 In real or complex vector spaces

If V is a vector space over

, and L is a subset of V, then L is a line segment if L can be parameterized as

, in which case the vectors u and u + v are called the end points of L.

Equivalently, a line segment is the convex hull of two points. Thus, the line segment can be expressed as a convex combination of the segment's two end points.

the line segment with endpoints A = (ax, ay) and C = (cx, cy) is the following collection of points:

In an axiomatic treatment of geometry, the notion of betweenness is either assumed to satisfy a certain number of axioms, or else be defined in terms of an isometry of a line (used as a coordinate system).

Segments play an important role in other theories. For example, a set is convex if the segment that joins any two points of the set is contained in the set. This is important because it transforms some of the analysis of convex sets to the analysis of a line segment. The Segment Addition Postulate can be used to add congruent segment or segments with equal lengths and consequently substitute other segments into another statement to make segments congruent.

As a degenerate ellipse

A line segment can be viewed as a degenerate case of an ellipse in which the semiminor axis goes to zero, the foci go to the endpoints, and the eccentricity goes to one. As a degenerate orbit this is a radial elliptic trajectory.

In other geometric shapes

In addition to appearing as the edges and diagonals of polygons and polyhedra, line segments appear in numerous other locations relative to other geometric shapes.

Other segments of interest in a triangle include those connecting various triangle centers to each other, most notably the incenter, the circumcenter, the nine-point center, the centroid, and the orthocenter.

In addition to the sides and diagonals of a quadrilateral, some important segments are the two bimedians (connecting the midpoints of opposite sides) and the four maltitudes (each perpendicularly connecting one side to the midpoint of the opposite side).

When a line segment is given an orientation (direction) it suggests a translation or perhaps a force tending to make a translation. The magnitude and direction are indicative of a potential change. This suggestion has been absorbed into mathematical physics through the concept of a Euclidean vector.[1][2] The collection of all directed line segments is usually reduced by making "equivalent" any pair having the same length and orientation.[3] This application of an equivalence relation dates from Giusto Bellavitis’s introduction of the concept of equipollence of directed line segments in 1835.

Analogous to straight line segments above, one can define arcs as segments of a curve.

This article incorporates material from Line segment on PlanetMath, which is licensed under the Creative Commons Attribution/Share-Alike License.