Dietmar Feichtinger (born 18 November 1961 in Bruck an der Mur) is an Austrian architect established since 1989 in Paris.

After graduating in 1988 from the Technical University in Graz with honors, he moveed to Paris in 1989 where he founded the studio Dietmar Feichtinger Architectes in 1994. Today, the firm has35 employees. A large variety of buildings have been realized by the company, including schools, public swimming pools, office buildings and housing.

In 1998 he won the competition for the Passerelle Simone-de-Beauvoir over the Seine, facing the Bibliothèque Nationale de France. Inaugurated by Bertrand Delanoë on 13 July 2006, the bridge has a total length of 304 meters and a clear span of 190 meters and is the first of the 37 Parisian bridges to carry the name of a female personality.

In 2002 Feichtinger won the competition for the new access bridge to Mont Saint-Michel, a monument classified world heritage by UNESCO, with a total length of 1841 meters. The bridge opened to pedestrians in July 2014 and shuttles in December 2014. During high tides the Mount becomes an island again thanks to the global restoring operation of its maritime character that began in 1995 and is provided by the Syndicat Mixte Baie du Mont-Saint Michel. In 2014, Dietmar Feichtinger was elected permanent member of the Academy of Arts Berlin. Even though he claims not to be a 'bridge specialist', he is the architect of 13 bridges and footbridges built in Europe including the Three Country Bridge between France and Germany over the Rhine and the Passerelle de la Paix in Lyon that opened to the public in March 2014, and links the commune of Caluire-et-Cuire to Cité International.

Currently, the studio works on the extension of the station and maritime center of Ostend in Belgium, the new headquarters of [Veolia Environnement]] in Paris, Porte d'Aubervilliers and the Centre for Research in Neuroscience on the Saclay Nuclear Research Centre campus as part of the Paris-Saclay operation, one of the main projects of the Grand Paris, development project for the whole of the Paris metropolitan area. 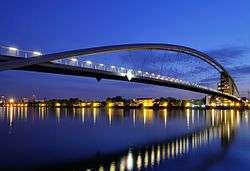