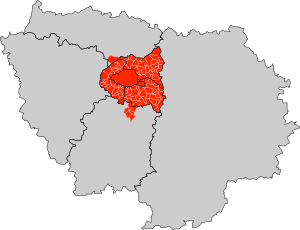 The map of Grand Paris

The Métropole du Grand Paris (French: [metʁopɔl dy ɡʁɑ̃ paʁi], "Metropolis of Greater Paris") is an Établissement public de coopération intercommunale, or public establishment for inter-communal cooperation, an administrative structure for cooperation between the City of Paris and its nearest suburbs. The region came into existence on January 1, 2016 and includes the City of Paris, the communes, towns of the three departments of the inner suburbs; Hauts-de-Seine, Seine-Saint-Denis and Val-de-Marne; plus seven communes in the outer suburbs, including Argenteuil in Val d'Oise and Paray-Vieille-Poste in Essonne, which were added to include major airports. Grand Paris covers 814 square kilometers and has a population of 6.945 million persons. [1]

The Métropole is administered by a Metropolitan Council of 210 members, not directly elected, but chosen by the councils of the member Communes. Its responsibilities include urban planning, housing, and protection of the environment.

The Métropole du Grand Paris should not be confused with the Grand Paris Express, a new transportation system being developed independently to connect the Departments in the Paris suburbs.

The idea of Grand Paris was originally proposed by former French President Nicolas Sarkozy as "a new global plan for the Paris metropolitan region"[2] It first led to a new transportation master plan for the Paris region and to plans to develop several areas around Paris. The "Métropole du Grand Paris" was defined by the law of 27 January 2014 on the modernization of public territorial action and affirmation of cities as part of Act III of decentralization. The plans were considerably modified in December 2015, and the passage into action in two competences, economic development and protection of the environment, was delayed from 2016 to 2017.

The plan was first announced on 17 September 2007 during the inauguration of "La Cité de l'architecture et du patrimoine", when Sarkozy declared his intent to create a "new comprehensive development project for Greater Paris". The project was organized by the French state, with the Minister of Culture and Communication charged with coordinating the consultation process.[3]

In 2008 an international urban and architectural competition for the future development of metropolitan Paris was launched. Ten teams gathering architects, urban planners, geographers, landscape architects will offer their vision for building a Paris metropolis of the 21st century in the post-Kyoto era and make a prospective diagnosis for Paris and its suburbs that will define future developments in Greater Paris for the next 40 years.[3]

Early versions of the plan proposed reforms to the local government structure of the Paris region by creating an integrated urban community encompassing the City of Paris and the surrounding Petite Couronne,[5] However, these were largely abandoned due to strong opposition from the socialist Mayor of Paris, Bertrand Delanoë, and the socialist head of the Île de France region, Jean-Paul Huchon.[6]

The original plan for the Métropole declared these objectives; "The Métropole of Grand Paris is established in order to define and implement metropolitan action to improve the quality of life of its residents, reduce inequalities between regions within it, to develop an urban, social and economic sustainability model, tools to improve attractiveness and competitiveness for the benefit of the entire national territory. The Métropole of Grand Paris is developing a metropolitan project. The residents are associated with its development according to the guidelines determined by the metropolitan council as laid down by the development council. This metropolitan project defines the general guidelines of the policy pursued by the Métropole of Grand Paris. It forms part of the implementation of the overall scheme of the Ile-de-France region. It includes a general, social, economic and environmental analysis of the metropolitan area, the strategic guidelines for the development of the metropolis as well as priority areas for intervention. The Metro project can be developed with the support of the Land and Technical Agency of the Paris Region, the International Workshop on Greater Paris, the Urban Planning Agencies and any other useful body. " 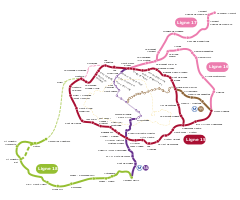 Independently to the process described above, a position of Minister for Le Grand Paris was created and Christian Blanc was appointed to occupy it. Blanc and his team prepared a transportation plan, announced on April 29, 2009.[7] The Île-de-France region had already published its own transportation plan. Later, the architects of the consultation joined together to present a third transportation plan. After much negotiation, a compromise between the national government the Île-de-France regional government was announced in January 2011 and the final plan subsequently approved.

The transport plan will be carried out in ten years, at a cost of 35 billion euros funded by the state, local governments and new debt.[8] An important part of the project is a driverless subway linking important business and residential poles such as Versailles and the Charles de Gaulle airport but also banlieues like Montfermeil and Clichy-sous-Bois through a figure-eight track 140 km long and operating 24-hour, which will alone cost 21 billion euros. Another 14 billion euros will be spent in the extension and re-equipment of existing metro, regional and suburban lines.[9]

The way Le Grand Paris has been handled was criticized by the architects themselves, especially by Jean Nouvel who wrote several virulent editorials against the Minister in charge of Le Grand Paris until June 2010, Christian Blanc.[10]

Politically, the President of the Île-de-France region, Jean-Paul Huchon and the Mayor of Paris, Bertrand Delanoë, both members of the French Socialist Party opposed the initiatives taken by the national government, which they said were in contradiction with the devolution of urban planning matters to local governments. In October 2011, Delanoë stated that the President "is trying to claim for himself an urban dynamic begun long ago by the local governments".[11] Although Huchon had reached an agreement with the national government earlier in the year on the transportation network, he also declared that Grand Paris "is not a generic term to cover everything that is going on on the territory of the Île-de-France region (...) and even less a national certificate created to relabel local policies that were already in existence."[11] Political opposition was also strong from the Green Party (Europe Écologie), led in the Île-de-France region by Cécile Duflot.