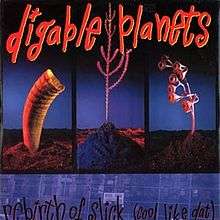 The cover of Rebirth of Slick (Cool Like Dat).

Butler and Irving met in Philadelphia in the late 1980s; Vieira and Irving had been a couple while attending Howard University. Originally from Seattle, Butler was interning at Sleeping Bag Records in New York and would visit his grandmother in Philadelphia where Irving was living and rapping with an outfit called the Dread Poets Society (later known as the 7 OD’s). The initial demos recorded under the name Digable Planets featured only Butler. After a brief stint with two other members, Butler began collaborating with Irving and Vieira in 1989.[2][3]

The group signed to Pendulum Records in 1992 and all three band members moved to New York, where Butler and Irving became roommates. Their debut album Reachin' (A New Refutation of Time and Space) was released in 1993 and certified gold by the RIAA. The album's lead single, "Rebirth of Slick (Cool Like Dat)" became a crossover hit, peaking at #15 on Billboard magazine's singles chart, earning gold certification by the RIAA, and winning Best Rap Performance by a Duo or Group. The track peaked at #67 in the UK Singles Chart in February 1995.[4]

The group's second album Blowout Comb was released in 1994. The album was noted by critics as a stark departure from the previous album, being darker, less hook-oriented and more overtly political in its references to Black Panther and Communist imagery. Writing for Spin in December 1994, Craig Marks declared it "... a beguiling, demanding, damn near revolutionary follow-up."[2] Blowout Comb features guest appearances from artists Jeru the Damaja, Sulaiman and Guru of Gang Starr.

In the same year the group appeared on the Red Hot Organization's compilation album, Stolen Moments: Red Hot + Cool. The album, meant to raise awareness and funds in support of the AIDS epidemic in relation to the African American community, was heralded as "Album of the Year" by Time magazine.

In February 2005 the trio reunited and embarked on a reunion tour, which was followed by the release of a compilation album titled Beyond the Spectrum: The Creamy Spy Chronicles on October 15, 2005 that combined previously released material with remixes and B-sides.[5]

From 2009 to 2011, Butler and Irving toured across the U.S., Canada, and Europe with a live band, the Cosmic Funk Orchestra. Support acts included Camp Lo and Butler's Shabazz Palaces.

The group performed at Numbers, in Houston, Texas, on May 15, 2010, alongside the hip hop duo Camp Lo.[6] During an interview with the Houston Chronicle near the time of this show, Doodlebug stated that a new single would be released, called "Fresh Out", and that a new album was planned for digital release in summer of 2010.[7] The group also performed alongside hip-hop group The Pharcyde at the North by Northeast music festival in Toronto, Ontario on June 19, 2011.[8]

A reunion show scheduled for December 2012 in Seattle, Washington was cancelled days before the performance. When asked in a subsequent interview about the group's status, Butler stated "I think it's the end."[9]

Despite Butler's previous statement, it was announced in October 2015 that the trio would again reunite for a concert at Seattle’s Neptune Theatre on December 30 alongside Shabazz Palaces.[10]

Digable Planets held a reunion tour during spring and summer 2016.

Butler released Bright Black under the moniker Cherrywine in 2003 before going on to collaborate with multi-instrumentalist Tendai 'Baba' Maraire as Shabazz Palaces. In 2009 the duo self-released two EPs, Shabazz Palaces and Of Light before becoming the first Hip-hop act to be signed to Sub Pop Records. Their debut LP Black Up was released in 2011 followed by Lese Majesty in 2014, both to wide critical acclaim.[11][12] Butler has also been signed to Sub Pop's A&R division and is helping the label build its repertoire of artists that are 'imaginative' and 'daring'.[13] Butler and Maraire later collaborated with Hussein Kalonji as Chimurenga Renaissance to release riZe vadZimu riZe in March 2014 on Brick Lane Records.[14]

Vieira (now known as Lady Mecca) released Trip The Light Fantastic in 2005 and has collaborated regularly with other musicians, notably on Legacy/Sony's Billie Holiday Remixed and Reimagined album (on the song "Spreadin' Rhythm Around"), Del tha Funkee Homosapien's Eleventh Hour (on the song "I Got You"), and with hip-hop supergroup eMC on the song "The Show". Vieira also contributed the voice of Tracey Triceratops on the Dino-5 children's CD through Ropeadope Records as well as continuing to perform as DJ Lady Mecca.