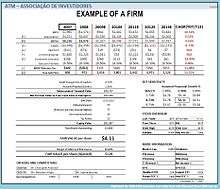 Discounted cash flow analysis is widely used in investment finance, real estate development, corporate financial management and patent valuation. It was used in industry as early as the 1700s or 1800s, widely discussed in financial economics in the 1960s, and became widely used in U.S. Courts in the 1980s and 1990s.[2]

The most widely used method of discounting is exponential discounting, which values future cash flows as "how much money would have to be invested currently, at a given rate of return, to yield the cash flow in future." Other methods of discounting, such as hyperbolic discounting, are studied in academia and said to reflect intuitive decision-making, but are not generally used in industry.

Discounted cash flow calculations have been used in some form since money was first lent at interest in ancient times. Studies of ancient Egyptian and Babylonian mathematics suggest that they used techniques similar to discounting of the future cash flows. This method of asset valuation differentiated between the accounting book value, which is based on the amount paid for the asset.[3] Following the stock market crash of 1929, discounted cash flow analysis gained popularity as a valuation method for stocks. Irving Fisher in his 1930 book The Theory of Interest and John Burr Williams's 1938 text The Theory of Investment Value first formally expressed the DCF method in modern economic terms.[4]

The discounted cash flow formula is derived from the future value formula for calculating the time value of money and compounding returns.

Thus the discounted present value (for one cash flow in one future period) is expressed as:

Where multiple cash flows in multiple time periods are discounted, it is necessary to sum them as follows:

for each future cash flow (FV) at any time period (t) in years from the present time, summed over all time periods. The sum can then be used as a net present value figure. If the amount to be paid at time 0 (now) for all the future cash flows is known, then that amount can be substituted for DPV and the equation can be solved for r, that is the internal rate of return.

All the above assumes that the interest rate remains constant throughout the whole period.

For continuous cash flows, the summation in the above formula is replaced by an integration:

is now the rate of cash flow, and

However, since three years have passed between the purchase and the sale, any cash flow from the sale must be discounted accordingly. At the time John Doe buys the house, the 3-year US Treasury Note rate is 5% per annum. Treasury Notes are generally considered to be inherently less risky than real estate, since the value of the Note is guaranteed by the US Government and there is a liquid market for the purchase and sale of T-Notes. If he hadn't put his money into buying the house, he could have invested it in the relatively safe T-Notes instead. This 5% per annum can therefore be regarded as the risk-free interest rate for the relevant period (3 years).

But what about risk?

We assume that the $150,000 is John's best estimate of the sale price that he will be able to achieve in 3 years time (after deducting all expenses, of course). There is of course a lot of uncertainty about house prices, and the outcome may end up higher or lower than this estimate.

(The house John is buying is in a "good neighborhood," but market values have been rising quite a lot lately and the real estate market analysts in the media are talking about a slow-down and higher interest rates. There is a probability that John might not be able to get the full $150,000 he is expecting in three years due to a slowing of price appreciation, or that loss of liquidity in the real estate market might make it very hard for him to sell at all.)

Under normal circumstances, people entering into such transactions are risk-averse, that is to say that they are prepared to accept a lower expected return for the sake of avoiding risk. See Capital asset pricing model for a further discussion of this. For the sake of the example (and this is a gross simplification), let's assume that he values this particular risk at 5% per annum (we could perform a more precise probabilistic analysis of the risk, but that is beyond the scope of this article). Therefore, allowing for this risk, his expected return is now 9.0% per annum (the arithmetic is the same as above).

That return rate may seem low, but it is still positive after all of our discounting, suggesting that the investment decision is probably a good one: it produces enough profit to compensate for tying up capital and incurring risk with a little extra left over. When investors and managers perform DCF analysis, the important thing is that the net present value of the decision after discounting all future cash flows at least be positive (more than zero). If it is negative, that means that the investment decision would actually lose money even if it appears to generate a nominal profit. For instance, if the expected sale price of John Doe's house in the example above was not $150,000 in three years, but $130,000 in three years or $150,000 in five years, then on the above assumptions buying the house would actually cause John to lose money in present-value terms (about $3,000 in the first case, and about $8,000 in the second). Similarly, if the house was located in an undesirable neighborhood and the Federal Reserve Bank was about to raise interest rates by five percentage points, then the risk factor would be a lot higher than 5%: it might not be possible for him to predict a profit in discounted terms even if he thinks he could sell the house for $200,000 in three years.

In this example, only one future cash flow was considered. For a decision which generates multiple cash flows in multiple time periods, all the cash flows must be discounted and then summed into a single net present value.

Methods of appraisal of a company or project

This is necessarily a simple treatment of a complex subject: more detail is beyond the scope of this article.

For these valuation purposes, a number of different DCF methods are distinguished today, some of which are outlined below. The details are likely to vary depending on the capital structure of the company. However the assumptions used in the appraisal (especially the equity discount rate and the projection of the cash flows to be achieved) are likely to be at least as important as the precise model used.

Both the income stream selected and the associated cost of capital model determine the valuation result obtained with each method. This is one reason these valuation methods are formally referred to as the Discounted Future Economic Income methods.

Commercial banks have widely used discounted cash flow as a method of valuing commercial real estate construction projects. This practice has two substantial shortcomings. 1) The discount rate assumption relies on the market for competing investments at the time of the analysis, which would likely change, perhaps dramatically, over time, and 2) straight line assumptions about income increasing over ten years are generally based upon historic increases in market rent but never factors in the cyclical nature of many real estate markets. Most loans are made during boom real estate markets and these markets usually last fewer than ten years. Using DCF to analyze commercial real estate during any but the early years of a boom market will lead to overvaluation of the asset.

Discounted cash flow models are powerful, but they do have shortcomings. DCF is merely a mechanical valuation tool, which makes it subject to the principle "garbage in, garbage out". Small changes in inputs can result in large changes in the value of a company. Instead of trying to project the cash flows to infinity, terminal value techniques are often used. A simple perpetuity is used to estimate the terminal value past 10 years, for example. This is done because it is harder to come to a realistic estimate of the cash flows as time goes on involves calculating the period of time likely to recoup the initial outlay.[7]