Not to be confused with Implied repo rate.

It is also called the discounted cash flow rate of return (DCFROR).[1]

In the context of savings and loans, the IRR is also called the effective interest rate.

IRR is used in capital budgeting to measure and compare the profitability of investments.

IRR calculations are commonly used to evaluate the desirability of investments or projects. The higher a project's IRR, the more desirable it is to undertake the project. Assuming all projects require the same amount of up-front investment, the project with the highest IRR would be considered the best and undertaken first.

A firm (or individual) should, in theory, undertake all projects or investments available with IRRs that exceed the cost of capital. Investment may be limited by availability of funds to the firm and/or by the firm's capacity or ability to manage numerous projects.

One of the uses of IRR is by corporations that wish to compare capital projects. For example, a corporation will evaluate an investment in a new plant versus an extension of an existing plant based on the IRR of each project. In such a case, each new capital project must produce an IRR that is higher than the company's cost of capital. Once this hurdle is surpassed, the project with the highest IRR would be the wiser investment, all other things being equal (including risk).

IRR is also useful for corporations in evaluating stock buyback programs. Clearly, if a company allocates a substantial amount to a stock buyback, the analysis must show that the company's own stock is a better investment (has a higher IRR) than any other use of the funds for other capital projects, or than any acquisition candidate at current market prices.

Given the (period, cash flow) pairs (

is a positive integer, the total number of periods

, (net present value); the IRR is given by

is usually given in years, but the calculation may be made simpler if

is calculated using the period in which the majority of the problem is defined (e.g., using months if most of the cash flows occur at monthly intervals) and converted to a yearly period thereafter.

Any fixed time can be used in place of the present (e.g., the end of one interval of an annuity); the value obtained is zero if and only if the NPV is zero.

In the case that the cash flows are random variables, such as in the case of a life annuity, the expected values are put into the above formula.

Often, the value of

cannot be found analytically. In this case, numerical methods or graphical methods must be used.

, there are many numerical methods that can be used to estimate

. For example, using the secant method,

th approximation of the IRR.

can be found to an arbitrary degree of accuracy. An accuracy of 0.00001% is provided by Microsoft Excel.

The convergence behaviour of by the following:

may speed up convergence of

Of particular interest is the case where the stream of payments consists of a single outflow, followed by multiple inflows occurring at equal periods. In the above notation, this corresponds to:

In this case the NPV of the payment stream is a convex, strictly decreasing function of interest rate. There is always a single unique solution for IRR.

for IRR, the secant method equation (see above) with

. This is sometimes referred to as the Hit and Trial (or Trial and Error) method. More accurate interpolation formulas can also be obtained: for instance the secant formula with correction

(which is most accurate when

If applied iteratively, either the secant method or the improved formula always converges to the correct solution.

refers to the NPV of the inflows only (that is, set

As an investment decision tool, the calculated IRR should not be used to rate mutually exclusive projects, but only to decide whether a single project is worth investing in. 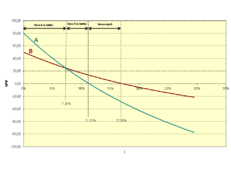 NPV vs discount rate comparison for two mutually exclusive projects. Project 'A' has a higher NPV (for certain discount rates), even though its IRR (= x-axis intercept) is lower than for project 'B' (click to enlarge)

In cases where one project has a higher initial investment than a second mutually exclusive project, the first project may have a lower IRR (expected return), but a higher NPV (increase in shareholders' wealth) and should thus be accepted over the second project (assuming no capital constraints).

IRR should not be used to compare projects of different duration. For example, the net present value added by a project with longer duration but lower IRR could be greater than that of a project of similar size, in terms of total net cash flows, but with shorter duration and higher IRR.

Modified Internal Rate of Return (MIRR) considers cost of capital, and is intended to provide a better indication of a project's probable return.

In the case of positive cash flows followed by negative ones and then by positive ones (for example, + + − − − +) the IRR may have multiple values. In this case a discount rate may be used for the borrowing cash flow and the IRR calculated for the investment cash flow. This applies for example when a customer makes a deposit before a specific machine is built.

In a series of cash flows like (−10, 21, −11), one initially invests money, so a high rate of return is best, but then receives more than one possesses, so then one owes money, so now a low rate of return is best. In this case it is not even clear whether a high or a low IRR is better. There may even be multiple IRRs for a single project, like in the example 0% as well as 10%. Examples of this type of project are strip mines and nuclear power plants, where there is usually a large cash outflow at the end of the project.

In general, the IRR can be calculated by solving a polynomial equation. Sturm's theorem can be used to determine if that equation has a unique real solution. In general the IRR equation cannot be solved analytically but only iteratively.

When a project has multiple IRRs it may be more convenient to compute the IRR of the project with the benefits reinvested.[4] Accordingly, MIRR is used, which has an assumed reinvestment rate, usually equal to the project's cost of capital.

It has been shown[5] that with multiple internal rates of return, the IRR approach can still be interpreted in a way that is consistent with the present value approach provided that the underlying investment stream is correctly identified as net investment or net borrowing.

See also[6] for a way of identifying the relevant value of the IRR from a set of multiple IRR solutions.

Despite a strong academic preference for NPV, surveys indicate that executives prefer IRR over NPV.[7] Apparently, managers find it easier to compare investments of different sizes in terms of percentage rates of return than by dollars of NPV. However, NPV remains the "more accurate" reflection of value to the business. IRR, as a measure of investment efficiency may give better insights in capital constrained situations. However, when comparing mutually exclusive projects, NPV is the appropriate measure.

Magni (2010) introduced a new approach, named AIRR approach, based on the intuitive notion of mean, that solves the problems of the IRR.[8] However, the above mentioned difficulties are only some of the many flaws incurred by the IRR. Magni (2013) provided a detailed list of 18 flaws of the IRR and showed how the AIRR approach does not incur the IRR problems. [9]

Finally, by Descartes' rule of signs, the number of internal rates of return can never be more than the number of changes in sign of cash flow.

It is often stated that IRR assumes reinvestment of all cash flows until the very end of the project. This is a misconception. There is no hidden reinvestment assumption associated with the calculation of IRR. IRR is simply the solution to the equation in the example shown above. The cash flows are static. The NPV is set at zero. There is only one unknown variable in the equation, namely r.

When IRR is used in place of NPV in capital budgeting or investment analysis, a user may make an implicit assumption of reinvestment when investments of different duration are compared. This assumption arises from the naive use of IRR, not in its calculation. Clearly a shorter project with a higher IRR is not necessarily better if the proceeds cannot be reinvested at the same rate. The Modified Internal Rate of Return (MIRR) addresses this issue by including a second investment at potentially different rate of return. However for capital budgeting, finance theory holds that NPV using the firm's cost of capital is a superior metric.

The internal rate of return in personal finance

The IRR can be used to measure the money-weighted performance of financial investments such as an individual investor's brokerage account. For this scenario, an equivalent,[16] more intuitive definition of the IRR is, "The IRR is the annual interest rate of the fixed rate account (like a somewhat idealized savings account) which, when subjected to the same deposits and withdrawals as the actual investment, has the same ending balance as the actual investment." This fixed rate account is also called the replicating fixed rate account for the investment. There are examples where the replicating fixed rate account encounters negative balances despite the fact that the actual investment did not.[16] In those cases, the IRR calculation assumes that the same interest rate that is paid on positive balances is charged on negative balances. It has been shown that this way of charging interest is the root cause of the IRR's multiple solutions problem.[17][18] If the model is modified so that, as is the case in real life, an externally supplied cost of borrowing (possibly varying over time) is charged on negative balances, the multiple solutions issue disappears.[17][18] The resulting rate is called the fixed rate equivalent (FREQ).[16]

In the context of investment performance measurement, there is sometimes ambiguity in terminology between the periodic rate of return, such as the internal rate of return as defined above, and a holding period return. The term internal rate of return or IRR or Since Inception Internal Rate of Return (SI-IRR) is in some contexts used to refer to the unannualized return over the period, particularly for periods of less than a year.[19]