Distance from a point to a line

The distance (or perpendicular distance) from a point to a line is the shortest distance from a fixed point to any point on a fixed line in Euclidean geometry. It is the length of the line segment which joins the point to the line and is perpendicular to the line. The formula for calculating it can be derived and expressed in several ways.

Knowing the shortest distance from a point to a line can be useful in various situations—for example, finding the shortest distance to reach a road, quantifying the scatter on a graph, etc. In Deming regression, a type of linear curve fitting, if the dependent and independent variables have equal variance this results in orthogonal regression in which the degree of imperfection of the fit is measured for each data point as the perpendicular distance of the point from the regression line.

Line defined by an equation

The point on this line which is closest to (x0,y0) has coordinates:[2]

The denominator of this expression is the distance between P1 and P2. The numerator is twice the area of the triangle with its vertices at the three points, (x0,y0), P1 and P2. See: Area of a triangle#Using coordinates. The expression is equivalent to

, which can be obtained by rearranging the standard formula for the area of a triangle:

, where b is the length of a side, and h is the perpendicular height from the opposite vertex.

This proof is only valid if the line is neither vertical nor horizontal, that is, we assume that neither a nor b in the equation of the line is zero.

and by squaring this equation we obtain:

using the above squared equation. But we also have,

and we obtain the length of the line segment determined by these two points, 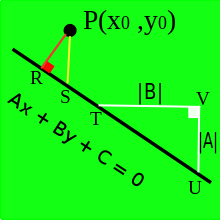 This proof is valid only if the line is not horizontal or vertical.[4]

Drop a perpendicular from the point P with coordinates (x0, y0) to the line with equation Ax + By + C = 0. Label the foot of the perpendicular R. Draw the vertical line through P and label its intersection with the given line S. At any point T on the line, draw a right triangle TVU whose sides are horizontal and vertical line segments with hypotenuse TU on the given line and horizontal side of length |B| (see diagram). The vertical side of ∆TVU will have length |A| since the line has slope -A/B.

Since S is on the line, we can find the value of m,

where D is the altitude of ∆UVT drawn to the hypoteneuse of ∆UVT from P. The distance formula can then used to express

in terms of the coordinates of P and the coefficients of the equation of the line to get the indicated formula. 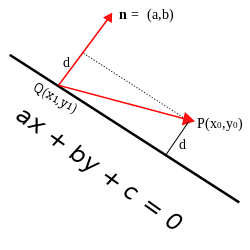 Let P be the point with coordinates (x0, y0) and let the given line have equation ax + by + c = 0. Also, let Q = (x1, y1) be any point on this line and n the vector (a, b) starting at point Q. The vector n is perpendicular to the line, and the distance d from point P to the line is equal to the length of the orthogonal projection of

on n. The length of this projection is given by:

Since Q is a point on the line,

It is possible to produce another expression to find the shortest distance of a point to a line. This derivation also requires that the line is not vertical or horizontal.

The point P is given with coordinates (

). The equation of a line is given by

. The equation of the normal of that line which passes through the point P is given

The point at which these two lines intersect is the closest point on the original line to the point P. Hence:

We can solve this equation for x,

The y coordinate of the point of intersection can be found by substituting this value of x into the equation of the original line,

Using the equation for finding the distance between 2 points,

, we can deduce that the formula to find the shortest distance between a line and a point is the following:

Recalling that m = -a/b and k = - c/b for the line with equation ax + by + c = 0, a little algebraic simplification reduces this to the standard expression.[8] 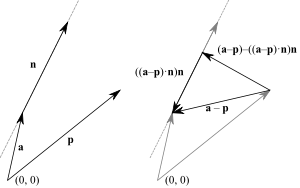 Illustration of the vector formulation.

The equation of a line can be given in in vector form:

Here a is the position of a point on the line, and n is a unit vector in the direction of the line. Then as scalar t varies, x gives the locus of the line.

This formula can be derived as follows:

is a vector from p to the point a on the line. Then

is the projected length onto the line and so

is a vector that is the projection of

onto the line. Thus

is the component of

perpendicular to the line. The distance from the point to the line is then just the norm of that vector.[9] This more general formula is not restricted to two dimensions.

, the distance between point A and line (d) is

is the cross product of the vectors

is the vector norm of