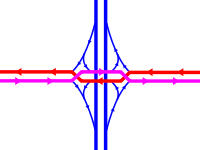 A diagram illustrating traffic movements in the interchange 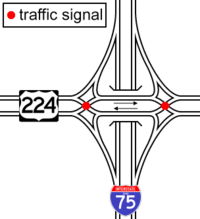 Like the continuous flow intersection, the diverging diamond interchange allows for two-phase operation at all signalized intersections within the interchange. This is a significant improvement in safety, since no long turns (e.g. left turns where traffic drives on the right side of the road) must clear opposing traffic and all movements are discrete, with most controlled by traffic signals.[3]

Additionally, the design can improve the efficiency of an interchange, as the lost time for various phases in the cycle can be redistributed as green time—there are only two clearance intervals (the time for traffic signals to change from green to yellow to red) instead of the six or more found in other interchange designs. 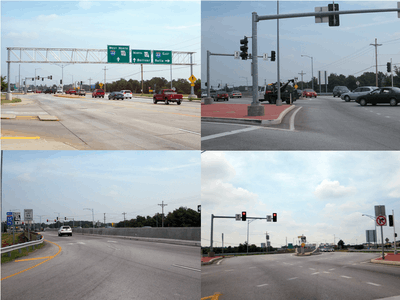 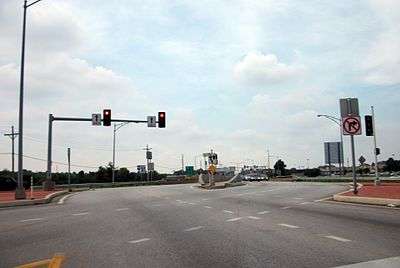 Southern approach to the I-44/Route 13 interchange in Springfield

Despite the fact that such interchanges already existed, the idea for the DDI was "reinvented" around 2000, inspired by the former "synchronized split-phasing" type freeway-to-freeway interchange between Interstate 95 and I-695 north of Baltimore.[5]

In 2005, the Ohio Department of Transportation (ODOT) considered reconfiguring the existing interchange on Interstate 75 at U.S. Route 224 and State Route 15 west of Findlay as a diverging diamond interchange to improve traffic flow. Had it been constructed, it would have been the first DDI in the United States.[6] By 2006, ODOT had reconsidered, instead adding lanes to the existing overpass.[7][8]

The interchange in Seclin (at 50°32′41″N 3°3′21″E﻿ / ﻿50.54472°N 3.05583°E﻿ / 50.54472; 3.05583) between the A1 and Route d'Avelin was somewhat more specialized than in the diagram at right: eastbound traffic on Route d'Avelin intending to enter the A1 northbound must keep left and cross the northernmost bridge before turning left to proceed north onto A1; eastbound traffic continuing east on Route d'Avelin must select a single center lane, merge with A1 traffic that is exiting to proceed east, and cross a center bridge. All westbound traffic that is continuing west or turning south onto A1 uses the southernmost bridge.

Additional research was conducted by a partnership of the Virginia Polytechnic Institute and State University and the Turner-Fairbank Highway Research Center and published by Ohio Section of the Institute of Transportation Engineers.[11] The Federal Highway Administration released a publication titled "Alternative Intersections/Interchanges: Informational Report (AIIR)" [12] with a chapter dedicated to this design. 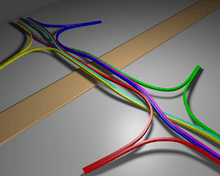