For other uses, see Draper (disambiguation).

Draper was originally a term for a retailer or wholesaler of cloth that was mainly for clothing. A draper may additionally operate as a cloth merchant or a haberdasher. 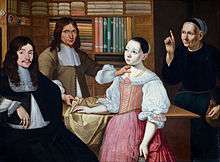 In the Draper's Shop by Adriaen Bloem

Drapers were an important trade guild during the medieval period, when the sellers of cloth operated out of draper's shops. However the original meaning of the term has now largely fallen out of use.

In 1724, Jonathan Swift wrote a series of satirical pamphlets in the guise of a draper called the Drapier's Letters. 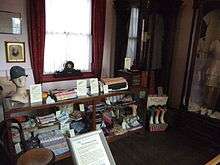 A replica draper's shop at the Museum of Lincolnshire Life, Lincoln, England

A number of notable people who have at one time or another worked as drapers include:

A draper is now defined as a highly skilled role within the fashion industry. The term is used within a fashion design or costume design studio for people tasked with creating garments or patterns by draping fabric over a dress form; draping uses a human form to physically position the cloth into a desired pattern. This is an alternative method to drafting, when the garment is initially worked out from measurements on paper.

A fashion draper may also be known as a "first hand" because they are often the most skilled creator in the workshop and the "first" to work with the cloth for a garment. However a first hand in a costume studio is often an assistant to the draper. They are responsible for cutting the fabric with the patterns and assisting in costume fittings.