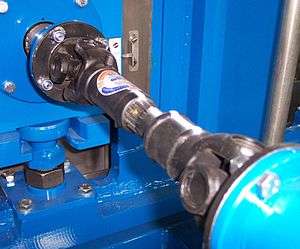 A drive shaft, driveshaft, driving shaft, propeller shaft (prop shaft), or Cardan shaft is a mechanical component for transmitting torque and rotation, usually used to connect other components of a drive train that cannot be connected directly because of distance or the need to allow for relative movement between them.

As torque carriers, drive shafts are subject to torsion and shear stress, equivalent to the difference between the input torque and the load. They must therefore be strong enough to bear the stress, whilst avoiding too much additional weight as that would in turn increase their inertia.

To allow for variations in the alignment and distance between the driving and driven components, drive shafts frequently incorporate one or more universal joints, jaw couplings, or rag joints, and sometimes a splined joint or prismatic joint.

The term drive shaft first appeared during the mid 19th century. In Storer's 1861 patent reissue for a planing and matching machine, the term is used to refer to the belt-driven shaft by which the machine is driven.[1] The term is not used in his original patent.[2] Another early use of the term occurs in the 1861 patent reissue for the Watkins and Bryson horse-drawn mowing machine.[3] Here, the term refers to the shaft transmitting power from the machine's wheels to the gear train that works the cutting mechanism.

In the 1890s, the term began to be used in a manner closer to the modern sense. In 1891, for example, Battles referred to the shaft between the transmission and driving trucks of his Climax locomotive as the drive shaft,[4] and Stillman referred to the shaft linking the crankshaft to the rear axle of his shaft-driven bicycle as a drive shaft.[5] In 1899, Bukey used the term to describe the shaft transmitting power from the wheel to the driven machinery by a universal joint in his Horse-Power.[6] In the same year, Clark described his Marine Velocipede using the term to refer to the gear-driven shaft transmitting power through a universal joint to the propeller shaft.[7] Crompton used the term to refer to the shaft between the transmission of his steam-powered Motor Vehicle of 1903 and the driven axle.[8]

An automobile may use a longitudinal shaft to deliver power from an engine/transmission to the other end of the vehicle before it goes to the wheels. A pair of short drive shafts is commonly used to send power from a central differential, transmission, or transaxle to the wheels. 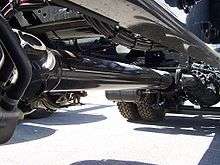 In front-engined, rear-drive vehicles, a longer drive shaft is also required to send power the length of the vehicle. Two forms dominate: The torque tube with a single universal joint and the more common Hotchkiss drive with two or more joints. This system became known as Système Panhard after the automobile company Panhard et Levassor patented it.

Most of these vehicles have a clutch and gearbox (or transmission) mounted directly on the engine, with a drive shaft leading to a final drive in the rear axle. When the vehicle is stationary, the drive shaft does not rotate. Some vehicles (generally sports cars, most commonly Alfa Romeos or Porsche 924s), seeking improved weight balance between front and rear, use a rear-mounted transaxle. This places the clutch and transmission at the rear of the car and the drive shaft between them and the engine. In this case the drive shaft rotates continuously with the engine, even when the car is stationary and out of gear.

A drive shaft connecting a rear differential to a rear wheel may be called a half-shaft. The name derives from the fact that two such shafts are required to form one rear axle.

Early automobiles often used chain drive or belt drive mechanisms rather than a drive shaft. Some used electrical generators and motors to transmit power to the wheels.

In British English, the term "drive shaft" is restricted to a transverse shaft that transmits power to the wheels, especially the front wheels. A drive shaft connecting the gearbox to a rear differential is called a propeller shaft, or prop-shaft. A prop-shaft assembly consists of a propeller shaft, a slip joint and one or more universal joints. Where the engine and axles are separated from each other, as on four-wheel drive and rear-wheel drive vehicles, it is the propeller shaft that serves to transmit the drive force generated by the engine to the axles.

Several different types of drive shaft are used in the automotive industry:

The slip-in-tube drive shaft is a new type that improves crash safety. It can be compressed to absorb energy in the event of a crash, so is also known as a collapsible drive shaft.

These evolved from the front-engine rear-wheel drive layout. A new form of transmission called the transfer case was placed between transmission and final drives in both axles. This split the drive to the two axles and may also have included reduction gears, a dog clutch or differential. At least two drive shafts were used, one from the transfer case to each axle. In some larger vehicles, the transfer box was centrally mounted and was itself driven by a short drive shaft. In vehicles the size of a Land Rover, the drive shaft to the front axle is noticeably shorter and more steeply articulated than the rear shaft, making it a more difficult engineering problem to build a reliable drive shaft, and which may involve a more sophisticated form of universal joint.

Modern light cars with all-wheel drive (notably Audi or the Fiat Panda) may use a system that more closely resembles a front-wheel drive layout. The transmission and final drive for the front axle are combined into one housing alongside the engine, and a single drive shaft runs the length of the car to the rear axle. This is a favoured design where the torque is biased to the front wheels to give car-like handling, or where the maker wishes to produce both four-wheel drive and front-wheel drive cars with many shared components. 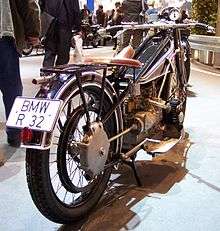 The exposed drive shaft on BMW's first motorcycle, the R32

Drive shafts have been used on motorcycles since before WW1, such as the Belgian FN motorcycle from 1903 and the Stuart Turner Stellar motorcycle of 1912. As an alternative to chain and belt drives, drive shafts offer relatively maintenance-free operation, long life and cleanliness. A disadvantage of shaft drive on a motorcycle is that helical gearing, spiral bevel gearing or similar is needed to turn the power 90° from the shaft to the rear wheel, losing some power in the process. On the other hand, it is easier to protect the shaft linkages and drive gears from dust, sand, and mud.

Motorcycle engines positioned such that the crankshaft is longitudinal and parallel to the frame are often used for shaft-driven motorcycles. This requires only one 90° turn in power transmission, rather than two. Bikes from Moto Guzzi and BMW, plus the Triumph Rocket III and Honda ST series all use this engine layout.

Motorcycles with shaft drive are subject to shaft effect where the chassis climbs when power is applied. This effect, which is the opposite of that exhibited by chain-drive motorcycles, is counteracted with systems such as BMW's Paralever, Moto Guzzi's CARC and Kawasaki's Tetra Lever.

On a power-driven ship, the drive shaft, or propeller shaft, usually connects the transmission inside the vessel directly to the propeller, passing through a stuffing box or other seal at the point it exits the hull. There is also a thrust block, a bearing to resist the axial force of the propeller. As the rotating propeller pushes the vessel forward, any length of drive shaft between propeller and thrust block is subject to compression, and when going astern to tension. Except for the very smallest of boats, this force isn't taken on the gearbox or engine directly.

Cardan shafts are also often used in marine applications between the transmission and either a propeller gearbox or waterjet. 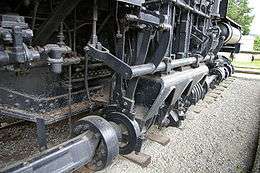 The rear drive shaft, crankshaft and front drive shaft of a Shay locomotive.

The Shay, Climax and Heisler locomotives, all introduced in the late 19th century, used quill drives to couple power from a centrally mounted multi-cylinder engine to each of the trucks supporting the engine. On each of these geared steam locomotives, one end of each drive shaft was coupled to the driven truck through a universal joint while the other end was powered by the crankshaft, transmission or another truck through a second universal joint. A quill drive also has the ability to slide lengthways, effectively varying its length. This is required to allow the bogies to rotate when passing a curve.

The drive shaft has served as an alternative to a chain-drive in bicycles for the past century, never becoming very popular. A shaft-driven bicycle (or "Acatane", from an early maker) has several advantages and disadvantages: