This article is about the professional simulators. For the video game genre, see Sim racing. 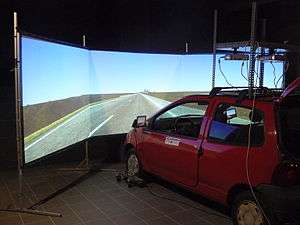 SIMUVEG. Driving Simulator developed by (University of Valencia) Spain. Used in evaluation of drivers, roads, IVIS devices and other areas. 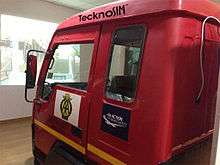 Driving simulators are used for entertainment as well as in training of driver's education courses taught in educational institutions and private businesses. They are also used for research purposes in the area of human factors and medical research, to monitor driver behavior, performance, and attention and in the car industry to design and evaluate new vehicles or new advanced driver assistance systems (ADAS).

Driving simulators are being increasingly used for training drivers all over the world. Research has shown that driving simulators are proven to be excellent practical and effective educational tools to impart safe driving training techniques for all drivers. There are various types of driving simulators that are being used like train simulators, bus simulator, car simulator, truck simulator etc. As of May 2012 the DVLA has removed driving simulators in some places into the hazard perception test that is required prior to taking the practical driving examination, lowering the chance of gaining experience. This includes learner drivers being able to park a car in various examples that require successful parking in order for candidates to pass the test.

Manufacturers such as Simworx in Australia, ADH Labs in India, Tecknotrove, Faros Simulation System and XPI Simulation are active in developing Driver Training Simulators that are relevant to Road Safety as well as immersive Student Driver Training. Hazard Perception and Disability Simulators for training amputees or the disabled in the use of hand controls whilst still abiding with local road rules are one of many features found in their simulators.

Occasionally, a racing game or driving simulator will also include an attachable steering wheel that can be used to play the game in place of a controller. The wheel, which is usually plastic, may also include pedals to add to the game's reality. These wheels are usually used only for computer games.

In addition to the myriad commercial releases there is a bustling community of amateur coders working on closed and open source free simulators. Some of the major features popular with fans of the genre are online racing, realism and diversity of cars and tracks.

Dutch simulator designer Cruden offers private use car simulators for personal entertainment.[1] Cruden car simulator is not connected to a computer game, system uses the same software that is designed for Formula 1 teams and engineers to improve their skills and their vehicles. The simulator provides different types of settings. Such as; different cars, terrains or any other desired settings. Also, telemetry analyze is available as an optional feature.

Driving simulators are used at research facilities for many purposes. Some vehicle manufacturers operate driving simulators. Many universities also operate simulators for research. In addition to studying driver training issues, driving simulators allow researchers to study driver behavior under conditions in which it would be illegal and/or unethical to place drivers. For instance, studies of driver distraction would be dangerous and unethical (because of the inability to obtain informed consent from other drivers) to do on the road.

With the increasing use of various in-vehicle information systems (IVIS) such as satellite navigation systems, cell phones, DVD players and e-mail systems, simulators are playing an important rule in assessing the safety and utility of such devices.

There exists a number of types research driving simulators, with a wide range of capabilities. The most complex, like the National Advanced Driving Simulator, have a full-sized vehicle body, with six-axis movement and 360-degree visual displays. On the other end of the range are simple desktop simulators such as the York Driving Simulator that are often implemented using a computer monitor for the visual display and a videogame-type steering wheel and pedal input devices. These low cost simulators are used readily in the evaluation of basic and clinically oriented scientific questions.[2][3][4][5][6][7]

The issue is complicated by political and economic factors, as facilities with low-fidelity simulators claim their systems are "good enough" for the job, while the high-fidelity simulator groups insist that their (considerably more expensive) systems are necessary. Research into motion fidelity indicates that, while some motion is necessary in a research driving simulator, it does not need to have enough range to match real-world forces.[8] Recent research has also considered the use of the real-time photo-realistic video content that reacts dynamically to driver behaviour in the environment.[9]

There is a question of validity—whether results obtained in the simulator are applicable to real-world driving. Given the inability to replicate some simulator studies on the sidewalk this is likely to remain an issue for some time. Some research teams are using automated vehicles to recreate simulator studies on a test track, enabling a more direct comparison between the simulator study and the real world.[10] As computers have grown faster and simulation is more widespread in the automotive industry, commercial vehicle math models that have been validated by manufacturers are seeing use in simulators. Driving simulators can also be used for the training of Airplane, Train, Tramway and other vehicles drivers. The simulation software can be seen as serious game, and some companies became specialists for the delivery of simulators systems (such as Oktal for instance).

Simulator Adaptation Syndrome ("SAS"), is an issue with all simulators, not just driving simulators. The main cause of Simulator Adaptation Syndrome are system delays between the driver's command and the response of the simulator. In effect the brain, referencing driving a real vehicle, expects the simulator's response to be the same as a car, the greater the deviation the greater the "adaption burden" on the brain.

If the deviation is large, the driver may experience symptoms of headaches, motion sickness, disorientation, etc. due to SAS although this is very dependent on the individual. Likewise the simulator "cues" also have an effect, that is some individuals will experience discomfort due to a simulator not having motion cues, where others may not have a problem with such simulators. Some individuals will show high tolerance to visual system delays, where others may not.

The "Adaptation" in SAS relates to the brain's accepting these simulator's disparities relative to a real vehicle and thus slowly changing its reference point to that of the simulation. Thus with gradual introduction to the simulator environment the brain will slowly adapt and the negative effects of SAS (headaches, motion sickness, disorientation, etc.) will be greatly reduced. Ironically, once a person spends several hours in a driving simulator a real vehicle can evoke SAS again however the adaption time is greatly reduced: the brain quickly "remembers" and "resets" the real vehicle reference point.

As an example of SAS timing, when airline pilots go through regular simulator training they are not allowed to fly an airplane for 1 week in order to allow their brains to "forget" the SAS reference point induced by the simulator.

To sum up, there is no such thing as "Simulator Sickness", there is however a physiological response to simulators called "SAS" which can result in headaches, motion sickness, and disorientation. By minimizing the simulator's system delays, rendering all the cues economically possible, and slowly introducing susceptible individuals, the effects of SAS can be mitigated.

The primary reason for the $54 million price tag of the National Advanced Driving Simulator was to reduce SAS the maximum amount possible. The National Advanced Driving Simulator is capable of rendering, including full motion cues, a driver passing a vehicle on a 2 lane highway from the beginning of the pass to the end (thus its enormous motion base).

Nowadays, driving simulators are not only used for research purposes but are also used in the development process of a vehicle by either the car manufacturers or their suppliers. This is for example the case with the car projectors development: to reduce costs and delays, car projectors are tested with virtual prototypes before any physical prototype is built.