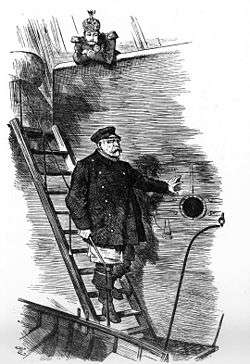 Dropping the Pilot is a political cartoon by Sir John Tenniel, first published in the British magazine Punch on 29 March 1890.[1] It depicts Chancellor Otto von Bismarck, as a maritime pilot, stepping off a ship (perhaps a reference to Plato's ship of state),[1] idly and unconcernedly watched by a young Wilhelm II, German Emperor. Bismarck had resigned as Chancellor at Wilhelm's demand just ten days earlier on 19 March,[2][3] as Bismarck's political views were too different from Wilhelm's.

After the cartoon's publication, Tenniel received a commission from Archibald Primrose, 5th Earl of Rosebery to create a copy to be sent to Bismarck himself. The former Chancellor reportedly replied, "It is indeed a fine one."[4]

The cartoon is well known in Germany and often used in history textbooks, under the title German: Der Lotse geht von Bord, (literally, The pilot leaves the ship).[1]