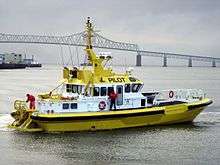 A pilot, also referred to as a marine pilot, maritime pilot, or harbor pilot is a mariner who manoeuvres ships through dangerous or congested waters, such as harbors or river mouths. He is normally an ex ship captain and a highly experienced shiphandler who possess detailed knowledge of the particular waterway, e.g. actual depth, direction and strength of the wind, current and tide at any time of the day.

Maneuvering a ship through the shallow water to berth / unberth in a port is basically a teamwork which involves, apart from the port pilot, the ship's captain (jointly responsible), ship's crew, port tugs, and shore linesmen. Since the pilot is on board the ship, he controls the tugs and linesmen through a radio and the ship directly. The ship's captain ensures his crew carry out the pilot's orders.

High skill is required to be a pilot as the channels through which the ships move towards the port is normally too narrow and shallow for the size of the ships, stopping distance of the ships being a few nautical miles and the fact that ships do not steer at slow speed. In an unfortunate case of an accident, high pollution is a risk as the ships carry thousands of tonnes of fuel for her own consumption. Also if a ship is wrecked in the channel, the channel and the port could be closed for months till the shipwreck is removed.

Most ports have compulsory pilotage.

Legally, the master has full responsibility for safe navigation of his vessel, even if a pilot is on board. If he has clear grounds that the pilot may jeopardize the safety of navigation, he can relieve him from his duties and ask for another pilot or, if not compulsory to have a pilot on board, navigate the vessel without one. Only in transit of the Panama Canal does the pilot have the full responsibility for the navigation of the vessel.

In English law, Section 742 of the Merchant Shipping Act 1894 defines a pilot as "any person not belonging to a ship who has the conduct thereof." In other words, someone other than a member of the crew who has control over the speed, direction, and movement of the ship. The current United Kingdom legislation governing pilotage is the Pilotage Act 1987.

Pilotage is one of the oldest professions, as old as sea travel, and it is one of the most important in maritime safety. The oldest recorded history dates back to about the 7th century BC.[1] The economic and environmental risk from today's large cargo ships makes the role of the pilot essential. 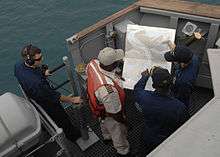 A Nigerian pilot assists a U.S. Navy ship into the harbor at Lagos using nautical charts

The work functions of the pilot go back to Ancient Greece and Roman times, when locally experienced harbour captains, mainly local fishermen, were employed by incoming ships' captains to bring their trading vessels into port safely. Eventually, because the act of pilotage needed to be regulated and to ensure that pilots had adequate insurance, the harbours licensed pilots. The California Board of Pilot Commissioners was the first government agency created by California's legislature, in 1850.

Before harbour boards were established, pilots known as hobblers would compete with one another. The first to reach an incoming ship would navigate it to the docks and receive payment.[2] In Dún Laoghaire, Ireland, there is a monument to the hobblers who lost their lives.[3] In Kent they were known as "hovellers" and worked alongside and in competition with the licensed pilots, but were sometimes blamed as wreckers.[4] George Byng Gattie defends the hovellers or "hobilers" as lifesavers in his 1890 book about the Goodwin Sands.[5]

Although licensed by the harbour to operate within their jurisdiction, pilots were generally self-employed, and so had to have quick transport to get from the port to the incoming ships. As pilots were often still dual-employed, they used their own fishing boats to reach the incoming vessels. But fishing boats were heavy working boats, and filled with fishing equipment, hence a new type of boat was required.

Early boats were developed from single-masted cutters and twin-masted yawls, and later into the specialist pilot cutter. These were effectively light-weight and over-powered single masted boats with large steeply angled keels, making them deep draft under power and shallow draft in lighter sail. Joseph Henderson was an early American harbor pilot. He is well known for being a Sandy Hook Pilot for the New York harbor and along the Atlantic Coast during the Civil War.

Some historic pilot vessels are still sailing. Eighteen Bristol Channel Pilot Cutters are believed to survive worldwide. In addition to them...

The Zodiac and Adventuress are both listed with the National Register of Historic Places and are now cruising in Washington state after restorations.[6][7] 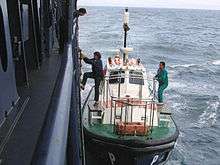 Boarding is tricky, as the ship will be moving and cannot afford to slow down

In the Inland Brown Water Trade another type of pilots are known as trip pilots. Due to the shortage of qualified posted masters these independent contractors fill the holes in the manning schedule on inland push boats on various inland river routes.

Their size and mass makes large ships very difficult to manoeuvre; the stopping distance of a supertanker is typically measured in miles/kilometers and even a slight error in judgment can cause millions of dollars in damage. For this reason, many years of experience in an operating area are required to qualify as a pilot. For example, the California Board of Pilot Commissioners requires that pilot trainees must have a master's license, two years command experience on tugs or deep draft vessels, and pass a written exam and simulator exercise, followed by a period of up to three years training gaining experience with all types of vessel and docking facilities. Following licensing, pilots are required to engage in extensive continuing educational programs.[8]

By far the most challenging part of any ship's voyage is the passage through the narrow waterways that lead to port and the final docking of the ship. The pilot brings to the ship expertise in handling large vessels in confined waterways and expert local knowledge of the port. In addition to bringing local maritime expertise on board, unlike the vessel's captain the pilot is insulated from the economic pressures (e.g., getting the ship from point A to point B on time, regardless of weather conditions, traffic, or other navigation issues) that can compromise safety. Instead of being part of the ship's crew, pilots are employed locally and therefore act on behalf of the public rather than of the shipowners.

Normally, the pilot joins an incoming ship prior to the ship's entry into the shallow water at the designated "Pilot boarding area" via helicopter or pilot boat and climbs a pilot ladder sometimes up to 40 feet (~12 metres) to the deck of the largest container and tanker ships. Climbing the pilot ladder can be dangerous, even more so in rough seas considering that both the ship to be piloted and the pilot's own vessel are usually both moving. With outgoing vessels, a pilot boat returns the pilot to land after the ship has successfully negotiated coastal waters.[9]

Pilots specifically use pilotage techniques relying on nearby visual reference points and local knowledge of tides, swells, currents, depths and shoals that might not be readily identifiable on nautical charts without first hand experience in the waters in question.

Beyond the experience and training of regular ships' captains, pilots also receive special, ongoing training to stay on top of their profession. Pilots are required by law in most major sea ports of the world for large ships.. In every case, it is correct to remember that, the pilot during the time passed aboard for operation, will remain under the Master's authority and remains always out of "ship's command chain". In other most clear terms the pilot remains aboard as an important and indispensable -Consultant of the Master-.

However, in some countries, Masters (and sometimes other ranks too) of ships that call at only a few ports and so have strong local knowledge and experience of navigating in those ports, such as a ferry, may be issued with a pilotage exemption certificate, which relieves them of the need to take a pilot on board.[10]

Because maritime pilots have advanced to the top of the maritime profession and are responsible for the most dangerous part of a voyage, they are generally well compensated.

Pilot compensation has been controversial in many ports, including Los Angeles and Long Beach, California, especially regarding pilots who are employed by public agencies instead of acting as independent contractors.[14][15]

Compensation varies in other nations. In New Zealand, according to the government career service, pilots earn NZ$90,000-120,000.[16]