This chart is often confused with the Single Top 100 and the Mega Top 50. 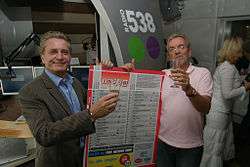 The Dutch Top 40 (Dutch: Nederlandse Top 40) is a weekly music chart compiled by Stichting Nederlandse Top 40. It started as a radio program titled "Veronica Top 40", on the offshore station Radio Veronica in 1965. It remained "The Veronica Top 40" until 1974, when the station was forced to stop broadcasting. Joost den Draaijer was the initiator of the top 40 in the Netherlands.

On January 2, 1965, the first Top 40 was compiled, with its first #1 hit "I Feel Fine" by The Beatles. In 1974, the Stichting Nederlandse Top 40 bought the Top 40 and named it De Nederlandse Top 40. The Dutch Top 40 is one of the three official charts in the Netherlands, the other two being the Single Top 100, which is based entirely on sales and streaming and the Mega Top 50 (3FM) which, like the Dutch Top 40 also includes airplay data.

Currently, Radio 538 is airing the Dutch Top 40 on radio. Jeroen Nieuwenhuize presents the program every Friday afternoon from 14.00 until 18.00.

As of February 2014 the chart is a combination of airplay , streaming and trends in social media.[1] The more often a song gets played on the radio, the higher its place in the Top 40.

For year end chart positions: #1 position gets 40 points, #2 position gets 39 points .... #40 position get one point. This way you just count up all numbers and sort them from most points till least points.

There is a set of rules, of which some have existed since 1972, that are still maintained. Some of these have been criticised as a hindrance.

This is a listing of significant achievements and milestones based upon the Dutch Top 40 charts.

Most weeks at number one

Most total weeks in the Top 40

Most number one singles