Dynamic equivalence and formal equivalence are two dissimilar translation techniques used to achieve differing levels of literalness between the original and target languages of a text. Both of these techniques are used in biblical translation. The two terms have often been understood fundamentally as sense-for-sense translation (translating the meanings of phrases or whole sentences) and word-for-word translation (translating the meanings of words and phrases in a more literal method).

According to Eugene Nida, dynamic equivalence is the "quality of a translation in which the message of the original text has been so transported into the receptor language that the response of the receptor is essentially like that of the original receptors."[1] The desire is that the reader of both languages would understand the meanings of the text in a similar fashion.

Formal equivalence is often more goal than reality, if only because one language may contain a word for a concept which has no direct equivalent in another language. In such cases, a more dynamic translation may be used or a neologism may be created in the target language to represent the concept (sometimes by borrowing a word from the source language).

The more the source language differs from the target language, the more difficult it may be to understand a literal translation without modifying or rearranging the words in the target language. On the other hand, formal equivalence can allow readers familiar with the source language to analyze how meaning was expressed in the original text, preserving untranslated idioms, rhetorical devices (such as chiastic structures in the Hebrew Bible) and diction in order to preserve original information and highlight finer shades of meaning.

Predominant use of formal equivalence 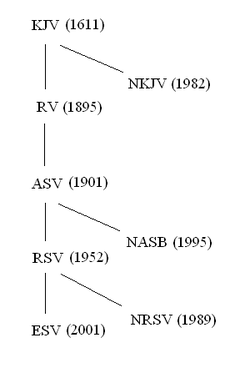 Moderate use between of formal and dynamic equivalence (optimal equivalence)

Extensive use of dynamic equivalence or paraphrase or both

Extensive use of paraphrase