Colombo - Katunayake Expressway  E03  is Sri Lanka's second E Class highway.[1] The 25.8-kilometre-long (16.0 mi) highway links the Sri Lankan capital Colombo with Bandaranaike International Airport, Katunayake[2] and Negombo city. Construction on the highway began in October 2009, and it was opened on the 27th October 2013, by former president Mahinda Rajapaksa.[3] The highway has three lanes each way from Colombo to Peliyagoda, and two lanes each way from Peliyagoda to Katunayake, with the width ranging from 26 to 33.5 metres (85 to 110 ft).[4]

The speed limit is 80 km/h (50 mph) for the first eight kilometres (5.0 mi) and 100 km/h (62 mph) for the rest of the road.[1] The Expressway has 42 bridges and 88 culverts including a 480 metre long viaduct at Hunupitiya and an 800-metre viaduct at Katunayake.[6] The opening of the highway has allowed people to travel between Colombo, the commercial capital of Sri Lanka and Katunayake, the major international airport of Sri Lanka, within 15 minutes.

The E03 expressway links the capital Colombo with one of the major commercial hubs in the country and the major tourist destination Negombo city, within 20 minutes. Sri Lanka Transport Board (SLTB) has also commenced a luxury bus service on the road, conducting services between Colombo - Negombo.

The contract was awarded to China Metallurgical Group Corporation (MCC) by the Government of Sri Lanka and the agreement was signed on 17 August 2008. The project loan agreements were signed on 6 August 2009 and the construction commenced on 18 August 2009.[6] The expressway was opened on the 27th October 2013 by President Mahinda Rajapaksa.[3]

The portion between New Kelani Bridge entrance (entry point from the City of Colombo) and Peliyagoda interchange is toll-free. Only the portion beyond Peliyagoda is operating as a toll road. Toll is to be paid at the Negombo toll-plaza when travelling direct from Peliyagoda, or when exiting at any toll-station mid-way.

ETC (Electronic toll collection) systems installed at all interchanges along the expressway. 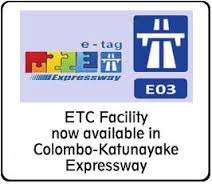