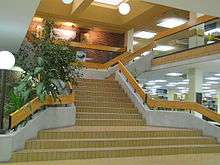 ENMU's main campus is located in Portales and there are also two degree-granting branches, at Ruidoso and Roswell. 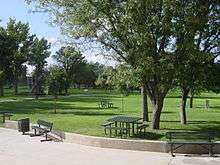 A view of the main quad of ENMU. 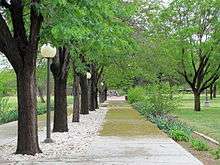 The New Mexico legislature approved the construction and staffing of a normal school in eastern New Mexico in 1927, and approved appropriation for construction in 1929, but the Stock Market Crash of 1929 and the Great Depression hindered the school's opening, which was delayed until 1934 (construction had begun in 1931).

ENMU's main campus, consisting of 344 acres (1.39 km2),[6] is located in Portales on the extreme eastern border of New Mexico, in the Eastern New Mexico/Llano Estacado region about halfway between the northern and southern boundaries of the state. (Portales is 90 miles (140 km) northeast of Roswell, 120 miles (190 km) southwest of Amarillo, Texas, and 110 miles (180 km) northwest of Lubbock, Texas.) ENMU owns KENW (TV) and KENW-FM, a public television and radio station that are housed and operated on the main campus.

The ENMU Ruidoso Campus is a two-year college or community college (one of 18 in New Mexico) and an official Branch of ENMU (branch status being granted in July 2005). Undergraduate and graduate course work completed at the ENMU-Ruidoso Branch campus is transferable for credit towards an undergraduate or graduate degree at ENMU-Portales, and, typically other undergraduate/graduate institutions in the United States. In 1991, the Ruidoso location had been established as the ENMU Ruidoso Branch Community College and offered two-year college academic and vocational programs. ENMU-Ruidoso offers Certificates of Completion, Associate of Science, Associate of Arts, and Associate of Applied Science degrees, as well as community education classes, customized training workshops, and adult basic education courses. It operates a One-Stop Career Center which provides free employment services for employers and job seekers in Lincoln County. The Center offers both an academic and vocational curriculum. (Ruidoso is located to the south-west of Portales, in a mountainous region of south-central New Mexico.)

The ENMU Roswell Campus, also a two-year branch, offers a wide variety of programs. The branch was established in the fall of 1958. In the spring of 1967, the institution moved to 12 buildings on 241 acres (0.98 km2) of the former Walker Air Force Base. (Roswell is one of New Mexico's larger cities, located in the southeast section of the state).

ENMU consists of four colleges and a graduate school:

College of Education and Technology

College of Liberal Arts and Sciences

The Jack Williamson Science Fiction Library at Eastern New Mexico University has one of the top science fiction collections in the world. It contains more than 30,000 volumes, including science fiction books, SF pulps dating back to the early 1900s, manuscripts, correspondence, and photographs.[9]

ENMU's athletic teams participate in the NCAA Division II Lone Star Conference. The Men's teams are nicknamed the Greyhounds, and the Women's teams are nicknamed the Zias. In early 2015, students and faculty voted to discontinue the Zia nickname and become the Lady Greyhounds; the female counterpart to the men's Greyhounds. ENMU vacated a number of wins starting from the 2008-09 season after the university self-reported over 100 eligibility violations.[10]