Not to be confused with Elliptic coordinate system.

The ecliptic coordinate system is a celestial coordinate system commonly used for representing the positions and orbits of Solar System objects. Because most planets (except Mercury), and many small Solar System bodies have orbits with small inclinations to the ecliptic, using it as the fundamental plane is convenient. The system's origin can be either the center of the Sun or the center of the Earth, its primary direction is towards the vernal (northbound) equinox, and it has a right-handed convention. It may be implemented in spherical coordinates or rectangular coordinates.[1] 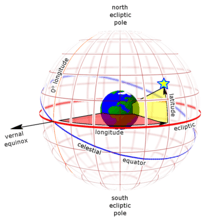 Earth-centered ecliptic coordinates as seen from outside the celestial sphere. Ecliptic longitude (red) is measured along the ecliptic from the vernal equinox. Ecliptic latitude (yellow) is measured perpendicular to the ecliptic. A full globe is shown here, although high-latitude coordinates are seldom seen except for certain comets and asteroids.

The apparent motion of the Sun along the ecliptic (red) as seen on the inside of the celestial sphere. Ecliptic coordinates appear in (red). The celestial equator (blue) and the equatorial coordinates (blue), being inclined to the ecliptic, appear to wobble as the Sun advances.
See also: Axial precession and Astronomical nutation

The celestial equator and the ecliptic are slowly moving due to perturbing forces on the Earth, therefore the orientation of the primary direction, their intersection at the Northern Hemisphere vernal equinox, is not quite fixed. A slow motion of Earth's axis, precession, causes a slow, continuous turning of the coordinate system westward about the poles of the ecliptic, completing one circuit in about 26,000 years. Superimposed on this is a smaller motion of the ecliptic, and a small oscillation of the Earth's axis, nutation.[2][3]

In order to reference a coordinate system which can be considered as fixed in space, these motions require specification of the equinox of a particular date, known as an epoch, when giving a position in ecliptic coordinates. The three most commonly used are:

) measures the angular distance of an object along the ecliptic from the primary direction. Like right ascension in the equatorial coordinate system, the primary direction (0° ecliptic longitude) points from the Earth towards the Sun at the vernal equinox of the Northern Hemisphere. Because it is a right-handed system, ecliptic longitude is measured positive eastwards in the fundamental plane (the ecliptic) from 0° to 360°. Because of axial precession, the ecliptic longitude of most "fixed stars" (referred to the equinox of date) increases by about 50.3 arcseconds per year, or 83.8 arcminutes per century, the speed of general precession.[6][7] However, for stars near the ecliptic poles, the rate of change of ecliptic longitude is dominated by the slight movement of the ecliptic (that is, of the plane of the earth's orbit), so the rate of change may be anything from minus infinity to plus infinity depending on the exact position of the star.

), measures the angular distance of an object from the ecliptic towards the north (positive) or south (negative) ecliptic pole. For example, the north ecliptic pole has a celestial latitude of +90°. Ecliptic latitude for "fixed stars" is not affected by precession.

). Different distance units are used for different objects. Within the Solar System, astronomical units are used, and for objects near the Earth, Earth radii or kilometers are used.

From antiquity through the 18th century, ecliptic longitude was commonly measured using twelve zodiacal signs, each of 30° longitude, a usage that continues in modern astrology. The signs approximately corresponded to the constellations crossed by the ecliptic. Longitudes were specified in signs, degrees, minutes, and seconds. For example, a longitude of

In China, ecliptic longitude is measured using 24 Solar terms, each of 15° longitude, and are used by Chinese lunisolar calendars to stay synchronized with the seasons, which is crucial for agrarian societies.

Heliocentric ecliptic coordinates. The origin is the center of the Sun. The fundamental plane is the plane of the ecliptic. The primary direction (the x axis) is the vernal equinox. A right-handed convention specifies a y axis 90° to the east in the fundamental plane; the z axis points toward the north ecliptic pole. The reference frame is relatively stationary, aligned with the vernal equinox.

A rectangular variant of ecliptic coordinates is often used in orbital calculations and simulations. It has its origin at the center of the Sun (or at the barycenter of the solar system), its fundamental plane in the plane of the ecliptic, and the x axis toward the vernal equinox. The coordinates have a right-handed convention, that is, if one extends their right thumb upward, it simulates the z-axis, their extended index finger the x-axis, and the curl of the other fingers points generally in the direction of the y-axis.[9]

is the obliquity of the ecliptic.