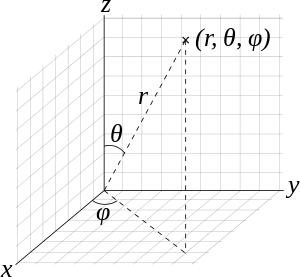 In geometry, a coordinate system is a system which uses one or more numbers, or coordinates, to uniquely determine the position of a point or other geometric element on a manifold such as Euclidean space.[1][2] The order of the coordinates is significant, and they are sometimes identified by their position in an ordered tuple and sometimes by a letter, as in "the x-coordinate". The coordinates are taken to be real numbers in elementary mathematics, but may be complex numbers or elements of a more abstract system such as a commutative ring. The use of a coordinate system allows problems in geometry to be translated into problems about numbers and vice versa; this is the basis of analytic geometry.[3] 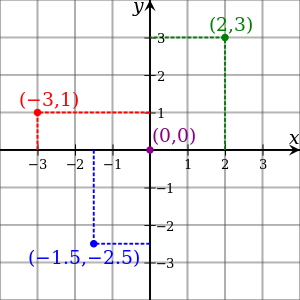 The Cartesian coordinate system in the plane.

The prototypical example of a coordinate system is the Cartesian coordinate system. In the plane, two perpendicular lines are chosen and the coordinates of a point are taken to be the signed distances to the lines. 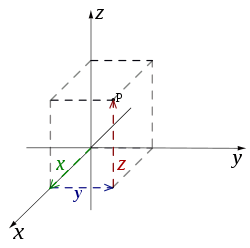 In three dimensions, three perpendicular planes are chosen and the three coordinates of a point are the signed distances to each of the planes.[5] This can be generalized to create n coordinates for any point in n-dimensional Euclidean space.

Depending on the direction and order of the coordinate axis the system may be a right-hand or a left-hand system. This is one of many coordinate systems.

Another common coordinate system for the plane is the polar coordinate system.[6] A point is chosen as the pole and a ray from this point is taken as the polar axis. For a given angle θ, there is a single line through the pole whose angle with the polar axis is θ (measured counterclockwise from the axis to the line). Then there is a unique point on this line whose signed distance from the origin is r for given number r. For a given pair of coordinates (r, θ) there is a single point, but any point is represented by many pairs of coordinates. For example, (r, θ), (r, θ+2π) and (−r, θ+π) are all polar coordinates for the same point. The pole is represented by (0, θ) for any value of θ.

Some other common coordinate systems are the following:

There are ways of describing curves without coordinates, using intrinsic equations that use invariant quantities such as curvature and arc length. These include:

It may occur that systems of coordinates for two different sets of geometric figures are equivalent in terms of their analysis. An example of this is the systems of homogeneous coordinates for points and lines in the projective plane. The two systems in a case like this are said to be dualistic. Dualistic systems have the property that results from one system can be carried over to the other since these results are only different interpretations of the same analytical result; this is known as the principle of duality.[11]

With every bijection from the space to itself two coordinate transformations can be associated: 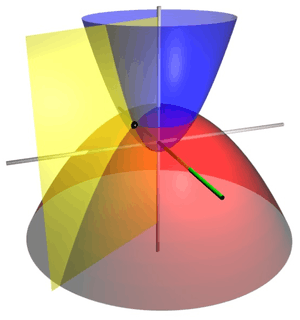