Edgar was the son of Edmund I and Ælfgifu of Shaftesbury. Upon the death of King Edmund in 946, Edgar's uncle, Eadred, ruled until 955. Eadred was succeeded by his nephew, Eadwig, the son of Edmund and Edgar's older brother.

Eadwig was not a popular king, and his reign was marked by conflict with nobles and the Church, primarily St Dunstan and Archbishop Oda. In 957, the thanes of Mercia and Northumbria changed their allegiance to Edgar.[3] A conclave of nobles declared Edgar as king of the territory north of the Thames.[4] Edgar became King of England upon Eadwig's death in October 959. 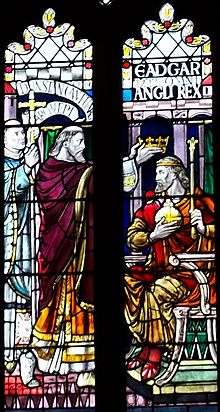 One of Edgar's first actions was to recall Dunstan from exile and have him made Bishop of Worcester (and subsequently Bishop of London and later, Archbishop of Canterbury). Dunstan remained Edgar's advisor throughout his reign. While Edgar may not have been a particularly peaceable man, his reign was peaceful. The Kingdom of England was well established, and Edgar consolidated the political unity achieved by his predecessors. By the end of his reign, England was sufficiently unified in that it was unlikely to regress back to a state of division among rival kingships, as it had to an extent under the reign of Eadred. Blackstone mentions that King Edgar standardised measure throughout the realm.[5] According to George Molyneaux, Edgar's reign, "far more than the reigns of either Alfred or Æthelstan, was probably the most pivotal phase in the development of the institutional structures that were fundamental to royal rule in the eleventh-century kingdom".[6]

The Monastic Reform Movement that introduced the Benedictine Rule to England's monastic communities peaked during the era of Dunstan, Æthelwold, and Oswald (historians continue to debate the extent and significance of this movement).[7]

In 963, Edgar allegedly killed Earl Æthelwald, his rival in love, near present-day Longparish, Hampshire.[8] The event was commemorated by the Dead Man's Plack, erected in 1825.[8] In 1875, Edward Augustus Freeman debunked the story as a "tissue of romance" in his book, Historic Essays;[9] however, his arguments were rebutted by naturalist William Henry Hudson in his 1920 book Dead Man's Plack and an Old Thorn.[4]

Edgar the Peaceful sits aboard a barge manned by eight kings, as it moves up the River Dee.

Edgar was crowned at Bath and anointed with his wife Ælfthryth, setting a precedent for a coronation of a queen in England itself.[10] Edgar's coronation did not happen until 973, in an imperial ceremony planned not as the initiation, but as the culmination of his reign (a move that must have taken a great deal of preliminary diplomacy). This service, devised by Dunstan himself and celebrated with a poem in the Anglo-Saxon Chronicle, forms the basis of the present-day British coronation ceremony.

The symbolic coronation was an important step; other kings of Britain came and gave their allegiance to Edgar shortly afterwards at Chester. Six kings in Britain, including the King of Scots and the King of Strathclyde, pledged their faith that they would be the king's liege-men on sea and land. Later chroniclers made the kings into eight, all plying the oars of Edgar's state barge on the River Dee.[11] Such embellishments may not be factual, and what actually happened is unclear.[12]

Edgar died on 8 July 975 at Winchester, Hampshire. He left behind Edward, who was probably his illegitimate son by Æthelflæd (not to be confused with the Lady of the Mercians), and Æthelred, the younger, the child of his wife Ælfthryth. He was succeeded by Edward. Edgar also had a possibly illegitimate daughter by Wulfthryth, who later became abbess of Wilton. She was joined there by her daughter, Edith of Wilton, who lived there as a nun until her death. Both women were later regarded as saints.[13][14]

Some see Edgar's death as the beginning of the end of Anglo-Saxon England, followed as it was by three successful 11th century conquests — two Danish and one Norman.

For a more complete genealogy including ancestors and descendants, see House of Wessex family tree. 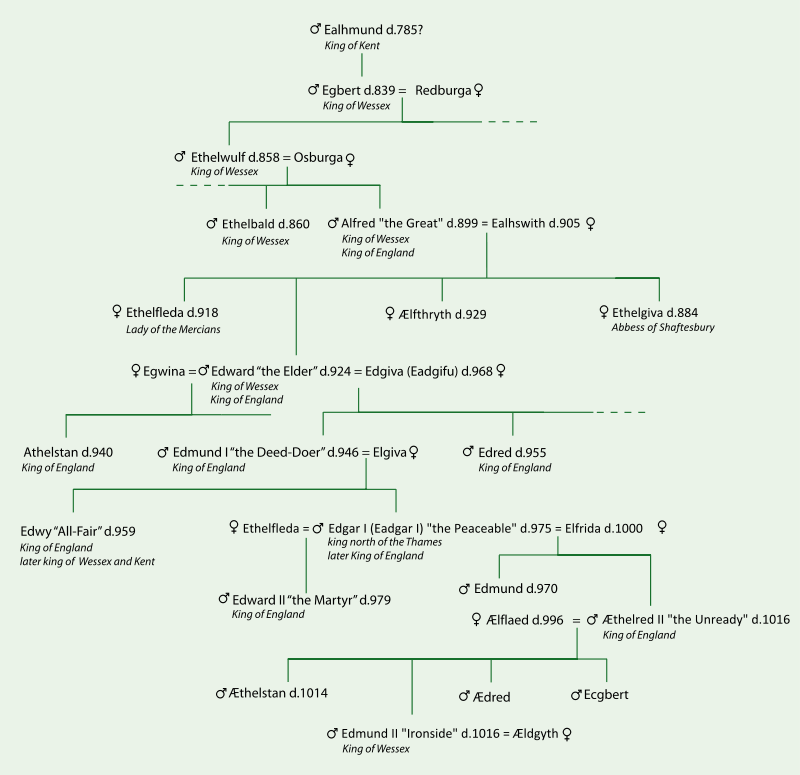