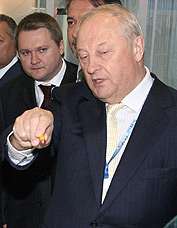 Eduard Ergartovich Rossel (Russian: Эдуард Эргартович Россель) was the governor (1995–2009) of Sverdlovsk Oblast, an oblast in Russia. He was born on October 8, 1937, and is of German origin. He returned into office in 1995. He is a member of the Federation Council of Russia.

Eduard Rossel was born in Bor, Nizhny Novgorod Oblast. In 1962 he graduated from the Urals State University of Mines and received his PhD degree in technical sciences in 1972. Doctor of economics (2001).

Governor of the Sverdlovsk Oblast since 1991.

Rossel supported Boris Yeltsin during his rise to power. Yeltsin and Rossel became more hostile for a time due to Rossel's demands that Sverdlovsk Oblast have status equal to that of Russia's republics. Rossel eventually returned to Yeltsin's favor, and in January 1996 Rossel won passage of a special bilateral agreement between Moscow and Sverdlovsk.