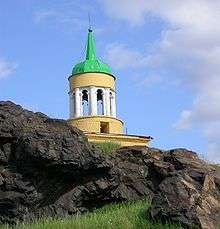 The watchtower atop the hill, a symbol of Nizhny Tagil 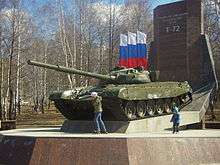 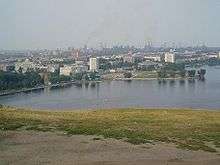 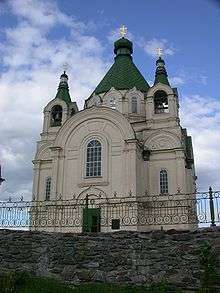 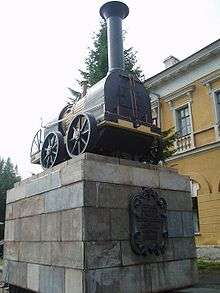 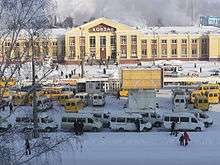 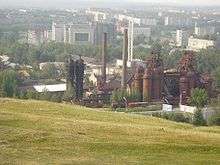 Rivers and ponds take up one third of the city's territory. Nizhny Tagil spans 22 kilometers (14 mi) from north to south and 21 kilometers (13 mi) from east to west. The city is built around Lisya Mountain extinct volcano. This mountain with a watch-tower on its top is a symbol of the city. Another mountain, Medved-Kamen, is located in the northern part of the city and is 100 meters (330 ft) high. High rock wall breaks into the Tagil River.

Neighboring cities include Yekaterinburg 130 kilometers (81 mi) to the south, Serov and Priobye in the north, Perm in the west, and Alapayevsk and Verkhnyaya Salda in the east.

The city's climate is temperate continental.

The altitude of the city varies from 170 to 380 meters (560 to 1,250 ft). This makes Nizhny Tagil one of the rare natural store-rooms on the Earth. There are many mineral deposits containing 63 elements of the periodic table.

The history of Nizhny Tagil begins with the opening of the Vysokogorsky iron ore quarry in 1696. The deposits were particularly rich, and included lodes of pure magnetic iron. The surrounding landscape provided everything needed for a successful and productive mining and smelting operation — rivers for transport, forests for fuel, and suitable climate.

Over the following decades, the city developed as one of the early centers of Russian industrialization, and it has been a major producer of cast iron and steel.

The first Russian steam locomotive was constructed there in 1833, and the father-and-son engineers who developed it, Yefim and Miron Cherepanovs (Черепанов), were in 1956 commemorated by an 8-meter (26 ft) bronze statue (executed by sculptor A. S. Kondratyev and architect A. V. Sotnikov) which stands in the center of the Theatrical Square in the heart of downtown.

According to some sources, the copper for the skin of the Statue of Liberty was mined and refined in Nizhny Tagil.[9]

In early 2007, a mass grave with 30 murdered girls and women was found near Nizhny Tagil. They had been abducted in the city by a prostitution gang between 2002 and 2006. See Nizhny Tagil mass murder (2002-2007). A frightful, fictionalized description of Nizhny Tagil and these murders appears in “The Bourne Sanction,” by Eric Van Lustbader, chapters 28, 30, 34 and 39.

The city is divided into three city districts: Leninsky, encompassing the city center and Nizhnetagilsky Pond; Tagilstroyevsky, a comparatively small section at the north part of town; and Dzerzhinsky, a sizable section to the east of the city center principally consisting of apartment buildings and other residences.

A large portion of the land within the bounds of the city is dominated by the facilities of the various factories located in this industrial city, including those of Oxochem.

Nizhny Tagil is an industrial center of the Middle Urals. Such highly power-intensive industries as ferrous metallurgy, engineering, chemistry, and metal working are well-developed in the city. A total of 606 manufacturing companies operate in Nizhny Tagil.

Uralvagonzavod (UVZ) is well known in Russia as the main producer of modern tanks on the territory of the former Soviet Union and Russia. It is the largest main battle tank manufacturer in the world. The T-72, T-90, and T-14 are produced in the city. As of 2016 an economic slowdown in Russia had resulted in diminished demand for civilian products such as train cars, but strong demand continued for tanks.[11]

The 42nd Rocket Division of Strategic Rocket Forces is based here,[12] equipped with 36 Topol nuclear missiles.

Nizhny Tagil is one of centers of exhibition activity in the Middle Urals. Nizhny Tagil Institute of Metals Testing was the host of the international exhibitions such as Ural Expo Arms / Russian Expo Arms, Russian Defense Expo (2001 and 2002).

Nizhny Tagil is known for its decorative trays.

Demidovs' initiatives in the area of culture had a favorable influence on the development of Tagil community into the Urals' most important cultural center. In the 19th century, a library and the museum of natural history and antiquity were opened.

The city has a network of 28 libraries servicing 75,000 readers every year.

Tagil museums include the old regional history museum, the museum of Fine Arts, and a number of new museums opened in the 1990s: the museum of tray painting art, the museum of lifestyle and handicrafts representing the starting point of a new ethnographic complex.

The Demidov Park, a new cultural and historical project, is planned to be built in the city.

City theatrical life is represented by three professional theaters: the National D. N. Mamin-Sibiryak Academic Drama Theater, a puppet theater, community theaters, and the actor department of Nizhny Tagil College of Arts, which has been training actors and actresses for Nizhny Tagil and oblast scenes for two years.

Several Maximum-security prisons surround the town, and most town residents have close connections to them. When prisoners are released from the prisons, they are not given their train fare, and most remain in the town.[13]

The oldest university is Nizhny Tagil State Socio-Educational Academy. The state educational academy operates 4 institutes, 13 faculties and 29 departments. There is post-graduate work in three fields: general education, the history of pedagogy and education, Russian history, the Russian language. In art and graphics department 2008 year launched five workshops in which students engage in decorative art. The Academy has four modern sports halls. In summer, a wall is erected for climbing. There is a gymnasium and fitness room.

The Nizhny Tagil Technological Institute[14] is located south-east of the city center.

The city ice hockey team is Sputnik Nizhny Tagil, which played in the Russian Major League.

There is a Yekaterinburg branch of eye microsurgery in Nizhny Tagil. There is obstetrical care. There is a network of municipal and private pharmacies.

Rail lines and highways connect the city to the rest of the country.

The city is served by the Salka Airport, located 17 kilometers (11 mi) northeast of the city. It was a military base until 1994. Then it become a civil airport.

Nizhny Tagil has been connected to the following personalities: 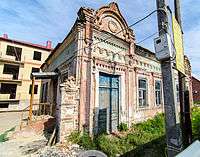 Nizhny Tagil is twinned with: