This article is about the poet and patron of the arts. For other persons of the same name, see Edward James (disambiguation).

Edward William Frank James (16 August 1907 – 2 December 1984) was a British poet known for his patronage of the surrealist art movement. 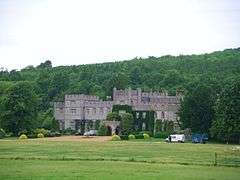 Edward James was born on 16 August 1907, the only son of William James (who had inherited a fortune from his father, merchant Daniel James[1]) and Evelyn Forbes, a Scots socialite. He was reputedly fathered by the Prince of Wales (later Edward VII)[2] and in his anecdotal reminiscences, recorded in Swans Reflecting Elephants – My Early Years, Edward James also puts forward this hypothesis.[3] However, there was also popular belief that Forbes may have been one of the Prince of Wales's mistresses and there was a much-quoted ballad by Hilaire Belloc intimating this at the time.[4][5][6]

Edward James had four older sisters: Audrey, Millicent, Xandra, and Silvia. He was educated at Lockers Park School,[7] then briefly at Eton, then at Le Rosey in Switzerland, and finally at Christ Church, Oxford, where he was a contemporary of Evelyn Waugh and Harold Acton. When his father died in 1912 he inherited the 8,000-acre (32 km2) West Dean House estate in Sussex, held in trust until he came of age. He was also left a large sum in trust when his uncle John Arthur James died in 1917.[8]

James's first sponsorship of note was in publishing John Betjeman's first book of poems when at Oxford. He worked with Brian Howard on the Glass Omnibus. After Oxford, James had a brief career as a trainee diplomat at the embassy in Rome. He was asked to send a coded message to London that the Italians had laid the keels for three destroyers, but got the code wrong; the message said "300 destroyers". Shortly after this he was sent "on indefinite leave".

In the early 1930s, James married Tilly Losch, an Austrian dancer, choreographer, actress and painter. He had several productions created expressly for her, the most notable of which was Les Ballets 1933, which included Kurt Weill, Lotte Lenya and George Balanchine. He and Boris Kochno commissioned that year Brecht and Weill's last collaboration, The Seven Deadly Sins, which Balanchine produced, directed and choreographed.

James divorced Losch in 1934, accusing her of adultery with Prince Serge Obolensky, an American hotel executive; her countersuit, in which she made it clear that James was homosexual, failed.[9] James was in fact bisexual.[10] After the divorce, James joined a social set in England which included the Mitford sisters and the composer Lord Berners.

James is best known as a passionate and early supporter of Surrealism, a movement that was born from the political uncertainty and upheaval between the wars. Rejecting the bourgeois' dominating rationality, surrealists escaped into a world of fantasy and irrationality. He sponsored Salvador Dalí for the whole of 1938 and his collection of paintings and art objects that subsequently came to be accepted as the finest collection of surrealist work in private hands. He also provided practical help, supporting Dalí for about two years, and allowed René Magritte to stay in his London house to paint.

James appeared in two famous surrealist paintings, both by Magritte:

Each suggests an alienated person. In the first, James looks into a mirror which shows the back of his head; in the second James's head is a fireball.

As well as Dalí and Magritte, his art collection included works by Hieronymus Bosch, Giorgio de Chirico, Paul Klee, Leonora Carrington, Pavel Tchelitchew, Pablo Picasso, Giacometti, Max Ernst and Paul Delvaux, amongst others.[12] Most were sold at a well-publicized sale at Christie's two years after his death.

His intellectual interest in surrealism is demonstrated by his sponsorship of Minotaure, a lavish Surrealist magazine published in Paris. His refurbishment of Monkton House,[13] in a part of the West Dean Estate, was a Surrealist dream. It was done in collaboration with the pioneering British decorator, Syrie Maugham, and has some of the most iconic Surrealist works on display, including the large Mae West Lips Sofa to which Dalí gave the form and colour of the actresses lips, and his Lobster Telephone in white. (The surrealist tradition at Monkton House was maintained when the Interior designer, Derek Frost, did extensive work to the house and designed more custom pieces of furniture in the late 1980s.) James donated these two items (among others) to the Brighton Museum & Art Gallery.[14] James most fantastic surrealist creation was realised in the Mexican rain forest, a surrealist Sculpture garden, "Las Pozas"

In 1940, James showed up in Taos, New Mexico, United States, as a guest of Mabel Dodge Luhan, where he was known for his amusing, clever eccentricity and effeminate manner. In Taos, he met the Hon. Dorothy Brett, an impoverished British aristocrat and painter, who in 1941 sold him nine paintings for $580. He later invited the 70-year-old Brett (as she was known) to return to England and reside at West Dean, but she declined.[15] 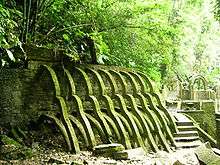 Las Pozas ("the Pools"), near the village of Xilitla, San Luis Potosí, more than 2,000 feet (610 m) above sea level, in a subtropical rainforest in the mountains of Mexico, is a garden created by James. It includes more than 80 acres (32 ha) of natural waterfalls and pools interlaced with towering Surrealist sculptures in concrete.[16] Massive sculptures up to four stories tall punctuate the site. The many trails throughout the garden site are composed of steps, ramps, bridges and narrow, winding walkways that traverse the valley walls.[17] Construction of Las Pozas cost more than $5 million. To pay for it, James sold his collection of Surrealist art at auction.[18] 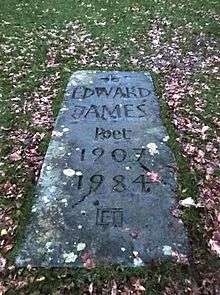 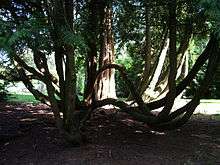 In 1964, James gave his English estate which included West Dean House at West Dean to a charitable trust. The Edward James Foundation comprises West Dean College, a centre for the preservation of traditional arts and crafts, through short courses and full-time Diplomas and MAs. One of only two professional Tapestry Weaving studios in the UK, an Art Gallery are all housed on a 6,400-acre (26 km2) estate which is open to the public through the West Dean Gardens.

West Dean College is part of the Edward James Foundation set up in 1971 in response to James' vision of establishing "an educational foundation where creative talents can be discovered and developed, and where one can spread culture through the teaching of crafts and the preservation of knowledge that might otherwise be destroyed or forgotten".

Edward James is buried in the St Roche's Arboretum at West Dean, with the simple inscription Edward James 1907 – 1984 Poet. The stone was carved by John Skelton.

I have seen such beauty as one man has seldom seen;
therefore will I be grateful to die in this little room,
surrounded by the forests, the great green gloom
of trees my only gloom – and the sound, the sound of green.
Here amid the warmth of the rain, what might have been
is resolved into the tenderness of a tall doom
who says: 'You did your best, rest' – and after you the bloom
of what you loved and planted still will whisper what you mean.
And the ghosts of the birds I loved, will attend me each a friend;
like them shall I have flown beyond the realm of words.
You, through the trees, shall hear them, long after the end
calling me beyond the river. For the cries of birds
continue, as – defended by the cortege of their wings –
my soul among strange silences yet sings.