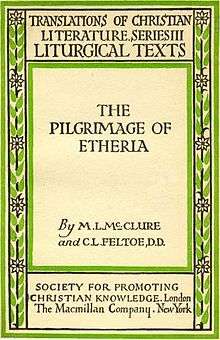 Cover of a translation into English of The Journey of Egeria type published in 1919.

Egeria, Etheroiua or Aetheria was a woman, widely regarded to be the author of a detailed account of a pilgrimage to the Holy Land. The long letter, dubbed Peregrinatio (pilgrimage) or Itinerarium Egeriae, is addressed to a circle of women at home. Historical details it contains set the journey in the early 380s, making out the earliest of the kind. It survives in fragmentary form in a later copy - lacking a title, date and attribution.

The middle part of Egeria's writing survived and was copied in the Codex Aretinus, which was written at Monte Cassino in the 11th century, while the beginning and end are lost. This Codex Aretinus was discovered in 1884 by the Italian scholar Gian Francesco Gamurrini, in a monastic library in Arezzo.[1] Recently, Prof. Jesús Alturo has identified two news fragments from one manuscript circa 900 in Caroline script.[2]

Gamurrini published the Latin text and theorised the author was Saint Sylvia of Aquitaine.[3] Others suggested Galla Placidia. In 1903 Marius Férotin claimed the author is one Aetheria or Egeria, known from a letter written by the 7th century Galician monk Valerio of Bierzo, and the date of travel was taken, about 381–384.[4] Following editions accepted this attribution.

It is through Valerio's letter that we first see the name Aetheria, and have much of the biographical information. He praises Egeria and identifies her as a nun, perhaps because she addresses her account to her "sorores" (Latin for "sisters") at home. However, others (including Hagith Sivan, 1988) have pointed out that during Egeria's time it was common to address fellow lay Christians as "sisters" and "brothers." It is possible that Egeria used the term to address her Christian acquaintances.[1] Valerio may also have believed her to be a nun because she went on such a pilgrimage, although lay women of the time are known to have engaged in such religious tourism. Egeria’s ability to make a long and expensive journey by herself, her numerous acquaintances and attentive guides in the places she visited, and her education indicate her middle or upper class wealthy background.[1] Both the itinerary and Valerio mention the "ocean" (the latter perhaps quoting), which suggests he was writing about a person travelling from the Roman Gallaecia. Others maintain the pilgrim was from Gaul.

Egeria set down her observations in a letter now called Itinerarium Egeriae (Travels of Egeria). It is sometimes also called Peregrinatio Aetheriae (the Pilgrimage of Aetheria) or Peregrinatio ad Loca Sancta (Pilgrimage to the Holy Lands) or some other combination. It is the earliest extant graphic account of a Christian pilgrimage.[5]

The text is a narrative apparently written at the end of Egeria's journey from notes she took en route, and addressed to her 'dear ladies': the women of her spiritual community back home. In the first extant part of the text, she describes the journey from her approach to Mount Sinai until her stop in Constantinople. Staying for 3 years in Jerusalem, she made excursions to Mount Nebo and to the tomb of Job in ancient Carneas/Karnaia,[6] (modern Al-Shaykh Saad, Syria).

Additionally, she visited the burial places of Haran the brother of Abraham, as well as the site where Eleazer met with Rebecca.[7] On her way back to Europe she stopped at Hagia Thekla - Saint Thecla's shrine near Seleucia Isauriae (modern Silifke, Turkey), particularly venerated by women. Upon her return to Constantinople, she planned to make a further trip to St. John's at Ephesus.

The second portion of the text is a detailed account of the liturgical services and observances of the church calendar in Jerusalem (most likely, under Cyril),[7][8] The liturgical year was in its incipient stages at the time of her visit. This is invaluable because the development of liturgical worship (e.g. Lent, Palm or Passion Sunday) reached universal practice in the 4th century. Egeria provides a first-hand account of practices and implementation of liturgical seasons as they existed at the time of her visit. This snapshot is before universal acceptance of a December 25 celebration of the nativity of Jesus; this is very early and very helpful in cataloging the development of annual liturgical worship.[9]

The Itinerarium Egeriae has provided scholars with valuable information about developments in the grammar and vocabulary of Vulgar Latin. For example, expressions such as "deductores sancti illi" ("those holy guides" meaning "the holy guides") help to reveal the origins of the definite article now used in all the Romance languages (except Sardinian) - such as Spanish ("las santas guías") or Italian ("le sante guide"). Similarly, the use of 'ipsam' in a phrase such as "per mediam vallem ipsam" ("through [the] middle of [the] valley itself") anticipates the type of definite article ("péri sa mesanía de sa bàdhe") that is found in Sardinian ("sa limba sarda") - at least in its standard form.