EFF provides funds for legal defense in court, presents amicus curiae briefs, defends individuals and new technologies from what it considers abusive legal threats, works to expose government malfeasance, provides guidance to the government and courts, organizes political action and mass mailings, supports some new technologies which it believes preserve personal freedoms and online civil liberties, maintains a database and web sites of related news and information, monitors and challenges potential legislation that it believes would infringe on personal liberties and fair use, and solicits a list of what it considers abusive patents with intentions to defeat those that it considers without merit.

For more details on this topic, see Timeline of Electronic Frontier Foundation actions.

The Electronic Frontier Foundation was formed in July 1990 by John Gilmore, John Perry Barlow and Mitch Kapor in response to a series of actions by law enforcement agencies that led them to conclude that the authorities were gravely uninformed about emerging forms of online communication,[5] and that there was a need for increased protection for Internet civil liberties.

In April 1990, Barlow had been visited by a U.S. Federal Bureau of Investigation agent in relation to the theft and distribution of the source code for a series of Macintosh ROMs. Barlow described the visit as "complicated by [the agent's] fairly complete unfamiliarity with computer technology. I realized right away that before I could demonstrate my innocence, I would first have to explain to him what guilt might be." Barlow felt that his experience was symptomatic of a "great paroxysm of governmental confusion during which everyone's liberties would become at risk".

Barlow posted an account of this experience to The WELL online community and was contacted by Mitch Kapor, who had had a similar experience. The pair agreed that there was a need to defend civil liberties on the Internet. Kapor agreed to fund any legal fees associated with such a defense and the pair contacted New York lawyers Rabinowitz, Boudin, Standard, Krinsky and Lieberman about defending several computer hackers from a Harper's magazine forum on computers and freedom who had been the target of Secret Service raids.[5] This generated a large amount of publicity which led to offers of financial support from John Gilmore and Steve Wozniak. Barlow and Kapor continued to research conflicts between the government and technology and in June 1990, Barlow posted online the influential article entitled "Crime & Puzzlement" in which Barlow announced his and Kapor's plans to create an organization to "raise and disburse funds for education, lobbying, and litigation in the areas relating to digital speech and the extension of the Constitution into Cyberspace."[6]

This generated further reaction and support for the ideas of Barlow and Kapor. In late June, Barlow held a series of dinners in San Francisco with major figures in the computer industry to develop a coherent response to these perceived threats. Barlow considered that: "The actions of the FBI and Secret Service were symptoms of a growing social crisis: Future Shock. America was entering the Information Age with neither laws nor metaphors for the appropriate protection and conveyance of information itself."[7] Barlow felt that to confront this a formal organization would be needed; he hired Cathy Cook as press coordinator, and began to set up what would become the Electronic Frontier Foundation.

The Electronic Frontier Foundation was formally founded on July 10, 1990, by Kapor and Barlow, who very soon after elected Gilmore, Wozniak, and Stewart Brand to join them on the Board of Directors.[7] Initial funding was provided by Kapor, Wozniak, and an anonymous benefactor.[8][9]

In 1990, Mike Godwin joined the organization as its first staff counsel. Then in 1991, Esther Dyson and Jerry Berman joined the EFF board of directors. By 1992 Cliff Figallo became the director of the original office in Cambridge, Massachusetts, and in December 1992, Jerry Berman became the acting executive director of the organization as a whole, based in a new second office in Washington, D.C.

The creation of the organization was motivated by the massive search and seizure on Steve Jackson Games executed by the United States Secret Service early in 1990. Similar but officially unconnected law-enforcement raids were being conducted across the United States at about that time as part of a state–federal task force called Operation Sundevil. However, the Steve Jackson Games case, which became EFF's first high-profile case, was the major rallying point around which EFF began promoting computer- and Internet-related civil liberties. In 1993, their offices moved to 1001 G Street in Washington, D.C.

EFF's second big case was Bernstein v. United States led by Cindy Cohn, in which programmer and professor Daniel J. Bernstein sued the government for permission to publish his encryption software, Snuffle, and a paper describing it. More recently, the organization has been involved in defending Edward Felten, Jon Lech Johansen and Dmitry Sklyarov. 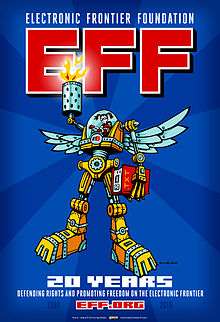 In early 2010, EFF released this poster in celebration of its founding 20 years before.

The organization was originally located at Mitch Kapor's Kapor Enterprises offices in Cambridge. By the fall of 1993, the main EFF offices were consolidated into a single office, in Washington, D.C., headed by Executive Director Jerry Berman. During this time, some of EFF's attention focused on influencing national policy, to the dislike be of some members of the organization. In 1994, Berman parted ways with EFF and formed the Center for Democracy and Technology, while Drew Taubman briefly took the reins as executive director.

In 1995, under the auspices of Executive Director Lori Fena, after some downsizing and in an effort to regroup and refocus on their base of support, the organization moved offices to San Francisco, California. There, it took up temporary residence at John Gilmore's Toad Hall, and soon afterward moved into the Hamm's Building at 1550 Bryant St. After Fena moved onto the EFF board of directors for a while, the organization was led briefly by Tara Lemmey, followed by Barry Steinhardt (who had come from the closely allied Technology and Liberty Program at the American Civil Liberties Union, and eventually returned to the ACLU). Not long before EFF's move into new offices at 454 Shotwell St. in SF's Mission District, Mike Godwin departed, long-time Legal Director Shari Steele was appointed as executive director, and staff attorney Cindy Cohn became the legal director.

In the spring of 2006, EFF announced the opening of an office again in Washington, D.C., with two new staff attorneys.[10]

In 2012, EFF began a fundraising campaign for the renovation of a building located at 815 Eddy Street in San Francisco, to serve as its new headquarters.[11] The move was completed in April, 2013.[12]

By the mid-1990s the EFF was becoming seriously concerned about the refusal of the US Government to license any secure encryption product for export unless it utilized key recovery and claims that governments could not decrypt information when protected by DES, continuing even after the public breaking of the code in the first of the DES Challenges. They coordinated and supported the construction of the EFF DES cracker (nicknamed Deep Crack), using special purpose hardware and software and costing only $210,000.[14][15] This brought the record for breaking a message down to 56 hours on 17 July 1998 and to under 24 hours on 19 Jan 1999 (in conjunction with distributed.net).

The EFF published the plans and source code for the cracker.[16] Within four years the Advanced Encryption Standard was standardized as a replacement for DES.

The EFF is a leading supporter of the Email Privacy Act.[17] 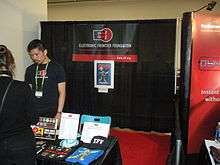 The EFF regularly brings and defends lawsuits at all levels of the US legal system in pursuit of its goals and objectives. Many of the most significant technology law cases have involved the EFF, including MGM Studios, Inc. v. Grokster, Ltd., Apple v. Does, and others. 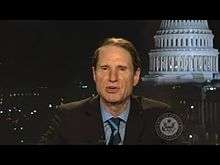 The EFF organizes two sets of awards to promote work in accordance with its goals and objectives:

The EFF Pioneer Awards are awarded annually to recognize individuals who in its opinion are "leaders who are extending freedom and innovation on the electronic frontier."[18] In 2009, the honorees were Limor Fried, Harri Hursti, and Carl Malamud.

The EFF Cooperative Computing Awards are a series of four awards meant "to encourage ordinary Internet users to contribute to solving huge scientific problems," to be awarded to the first individual or group who discovers a prime number with a significant record number of decimal digits. The awards are funded by an anonymous donor.[19] The awards are:

The Patent Busting Project is an Electronic Frontier Foundation (EFF) initiative challenging patents that the organization claims are illegitimate and suppress innovation or limit online expression. The initiative launched on April 19, 2004 and involves two phases: documenting the damage caused by these patents, and submitting challenges to the United States Patent and Trademark Office (USPTO).

EFF publishes through several outlets such as the online periodical EFFector (ISSN 1062-9424),[22] as well as its websites, blogs, and on social networking services.

EFF's first book was published in 1993 as The Big Dummy's Guide to the Internet, a beginners' how-to manual by contracted technical writer Adam Gaffin, and made available for free download in many formats. MIT Press published it in paperback form in 1994 as Everybody's Guide to the Internet (ISBN 9780262571050). The online edition was updated regularly throughout the 1990s and early 2000s, and translated into dozens of languages.

The organization's second book, Protecting Yourself Online (ISBN 9780062515124), an overview of digital civil liberties, was written in 1998 by technical writer Robert B. Gelman and EFF Communications Director Stanton McCandlish, and published by HarperCollins.

The Electronic Frontier Foundation's blog, DeepLinks, is a major section of its main website at EFF.org.

The EFF sent a video message of support to global grassroots movement CryptoParty.[24]

The EFF has developed some software and browser add-ons, including Switzerland, HTTPS Everywhere, and Privacy Badger.

Charity Navigator has given the EFF an overall rating of four out of four stars, including four stars for its financial efficiency and capacity.[25]

EFF as of 2014 had $23 million in assets,[26] having received multiple grants or donations above 1 million dollars in its history. This paragraph lists the main ones.

On February 18, 2004, the EFF announced that it had received a bequest of US$1.2 million from the estate of EFF member Leonard Zubkoff, a software developer and entrepreneur.[27] It used $1 million of this money to establish the EFF Endowment Fund for Digital Civil Liberties.

In 2011, the EFF received $1 million from Google as part of a settlement of a class action related to privacy issues involving Google Buzz. The Electronic Privacy Information Center and seven other privacy-focused nonprofits protested that the plaintiffs' lawyers and Google had, in effect, arranged to give the majority of those funds "to organizations that are currently paid by Google to lobby for or to consult for the company." An additional $1 million was obtained from Facebook in a similar settlement.[31]

In December 2014, the Adams Charitable Foundation granted EFF a $3 million endowment to fund the new Adams Chair for Internet Rights.[26]

The agitprop art group Psychological Industries has independently issued buttons with pop culture tropes such as the logo of the Laughing Man from the anime series Ghost in the Shell: Stand Alone Complex (with the original The Catcher in the Rye quotation replaced with the slogan of Anonymous), a bleeding roller derby jammer, and the "We Can Do It!" woman (often misidentified as Rosie the Riveter) on a series of buttons on behalf of the EFF.[32]

In late June 2014 the EFF flew a GEFA-FLUG AS 105 GD/4[33] blimp owned by, and in conjunction with, Greenpeace over the NSA's Bluffdale-based Utah Data Center in protest against its purported illegal spying.[34]

The EFF is mentioned in many novels that deal with cryptography or digital rights issues, including Digital Fortress by Dan Brown (1998; released the same year the EFF DES cracker was built), and the works of Cory Doctorow (who is a former EFF regional director for Europe).