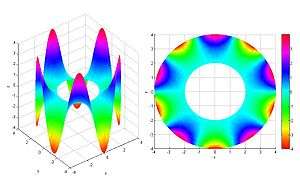 A solution to Laplace's equation defined on an annulus. The Laplace operator is the most famous example of an elliptic operator.

In the theory of partial differential equations, elliptic operators are differential operators that generalize the Laplace operator. They are defined by the condition that the coefficients of the highest-order derivatives be positive, which implies the key property that the principal symbol is invertible, or equivalently that there are no real characteristic directions.

Elliptic operators are typical of potential theory, and they appear frequently in electrostatics and continuum mechanics. Elliptic regularity implies that their solutions tend to be smooth functions (if the coefficients in the operator are smooth). Steady-state solutions to hyperbolic and parabolic equations generally solve elliptic equations.

A linear differential operator L of order m on a domain

in Rn given by

is a multi-index, and

) is called elliptic if for every x in

In many applications, this condition is not strong enough, and instead a uniform ellipticity condition may be imposed for operators of degree m = 2k:

where C is a positive constant. Note that ellipticity only depends on the highest-order terms.[1]

is elliptic if its first-order Taylor expansion with respect to u and its derivatives about any point is a linear elliptic operator.

Example 1
The negative of the Laplacian in Rd given by

is a uniformly elliptic operator. The Laplace operator occurs frequently in electrostatics. If ρ is the charge density within some region Ω, the potential Φ must satisfy the equation

Example 2
Given a matrix-valued function A(x) which is symmetric and positive definite for every x, having components aij, the operator

is elliptic. This is the most general form of a second-order divergence form linear elliptic differential operator. The Laplace operator is obtained by taking A = I. These operators also occur in electrostatics in polarized media.
Example 3
For p a non-negative number, the p-Laplacian is a nonlinear elliptic operator defined by

A similar nonlinear operator occurs in glacier mechanics. The Cauchy stress tensor of ice, according to Glen's flow law, is given by

for some constant B. The velocity of an ice sheet in steady state will then solve the nonlinear elliptic system

where ρ is the ice density, g is the gravitational acceleration vector, p is the pressure and Q is a forcing term.

Let L be an elliptic operator of order 2k with coefficients having 2k continuous derivatives. The Dirichlet problem for L is to find a function u, given a function f and some appropriate boundary values, such that Lu = f and such that u has the appropriate boundary values and normal derivatives. The existence theory for elliptic operators, using Gårding's inequality and the Lax–Milgram lemma, only guarantees that a weak solution u exists in the Sobolev space Hk.

This situation is ultimately unsatisfactory, as the weak solution u might not have enough derivatives for the expression Lu to even make sense.

The elliptic regularity theorem guarantees that, provided f is square-integrable, u will in fact have 2k square-integrable weak derivatives. In particular, if f is infinitely-often differentiable, then so is u.

As an application, suppose a function

be a (possibly nonlinear) differential operator between vector bundles of any rank. Take its principal symbol

with respect to a one-form

. (Basically, what we are doing is replacing the highest order covariant derivatives

is weakly elliptic if

is a linear isomorphism for every non-zero

is (uniformly) strongly elliptic if for some constant

. It is important to note that the definition of ellipticity in the previous part of the article is strong ellipticity. Here

is an inner product. Notice that the

are covector fields or one-forms, but the

are elements of the vector bundle upon which

The quintessential example of a (strongly) elliptic operator is the Laplacian (or its negative, depending upon convention). It is not hard to see that

needs to be of even order for strong ellipticity to even be an option. Otherwise, just consider plugging in both

Weak ellipticity is nevertheless strong enough for the Fredholm alternative, Schauder estimates, and the Atiyah–Singer index theorem. On the other hand, we need strong ellipticity for the maximum principle, and to guarantee that the eigenvalues are discrete, and their only limit point is infinity.