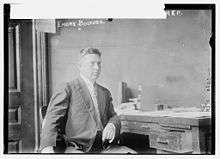 Emory Roy Buckner (August 7, 1877 -- March 11, 1941) was a prominent U.S. lawyer who served as the United States Attorney for the Southern District of New York, where he gained a reputation as one of the greatest prosecutors in American history. During his time at Root, Clark & Bird (which subsequently became Dewey Ballantine), he was also one of the architects of modern Wall Street's legal culture.

Buckner was born in Pottawattamie County, Iowa, on August 7, 1877, the son of the Reverend James Dysart Monroe Buckner (1855–1934) and Sarah Adeline Ellis (1859–1941). He was raised in Nebraska, and at age 15 completed a shorthand course, after which he spent three years in Oklahoma as a traveling court reporter. He graduated from the University of Nebraska–Lincoln in 1904. When he contacted the dean of the University of Nebraska–Lincoln College of Law, Roscoe Pound, about attending law school, Pound encouraged Buckner to attend Harvard Law School and raised money to help pay Buckner's way. Buckner graduated near the top of his class in 1907, and established a close friendship with Felix Frankfurter which would prove to be lifelong.

A Republican, he worked for Henry L. Stimson, who was then the United States Attorney for the Southern District of New York. Afterwards, he was an assistant to Charles S. Whitman, who was then the New York County District Attorney. He first gained prominence in the district attorney's office when he was chosen to conduct a highly publicized investigation into corruption allegations at the New York Police Department.

Entering private practice, he formed a partnership, Buckner & Howland, which in 1913 merged with Root, Clark & Bird (a highly successful Wall Street law firm founded in 1909 by three of Buckner's law school classmates) to form the firm of Root, Clark, Buckner & Howland, a firm which spawned both Dewey Ballantine (which today is Dewey & LeBoeuf) and Cleary Gottlieb Steen & Hamilton.

Recognized as one of the greatest trial lawyers of his time, Buckner was appointed by President Calvin Coolidge to the post of United States Attorney for the Southern District of New York, and he served from 1925 to 1927. In the midst of Prohibition, he directed highly publicized trials of the operators of speakeasies. He also gained national notoriety when he insisted on prosecuting Harry M. Daugherty (United States Attorney General under Warren G. Harding) for bribe taking, against the wishes of the Coolidge administration.

Returning to Root, Clark in 1927, Buckner became one of the architects of Wall Street's modern legal culture. Serving as Root, Clark's hiring partner, Buckner shaped a generation of the nation's top corporate lawyers. He is credited with coining the term "associate" for junior members of a law firm, which replaced the older term, "law clerk". At his urging, Root, Clark became the first law firm to pay its associates an annual bonus out of the firm's profits. He also initiated the practice of having an annual luncheon with hiring partners at the other Wall Street firms, at which they set the "going rate" for associate salaries. Under his leadership, Root, Clark also became the first of the white shoe firms to accept Jewish applicants. Buckner disdained rival firm Cravath, Swaine & Moore's tendency to "hold associates' hands" and insisted on delegating the maximum possible amount of work to his young associates: by systematically under-staffing cases, Buckner was able to provide his clients with quality work product at cheaper rates.

Under Buckner's leadership, Root, Clark also became the first firm to encourage associates to come to the firm directly after law school instead of spending time in public service before joining the firm. Buckner's friend Frankfurter deplored the practice and it led to some tension between the two, particularly in 1926–27, when the two had a heated argument over Henry Friendly. Frankfurter, who was Friendly's teacher at Harvard Law, encouraged Friendly to spend a fourth year at law school, then spend a year clerking for Louis Brandeis, and then return to the Harvard Law School faculty. Buckner encouraged Friendly to clerk immediately, and then come to Root, Clark. Buckner won out, and Friendly joined Root, Clark in 1928, where he became a partner. (With five other Root, Clark partners, Friendly founded Cleary, Friendly, Gottlieb & Steen, the predecessor of Cleary Gottlieb Steen & Hamilton, in 1946.)

Buckner explored the possibility of leveraging the notoriety he gained as US Attorney into a run for governor of New York, but reconsidered after he suffered a stroke in 1934. During this period, his chief assistant at Root, Clark was John Marshall Harlan II, who would later serve with Buckner's friend Frankfurter on the United States Supreme Court.

Buckner was a high regarded mentor to many junior attorneys, who became known collectively as "Buckner Boys" or "Buckner's Boys". Among the prominent members of this group were Herbert Brownell Jr., John M. Cashin, Bethuel M. Webster, and Francis T.P. Plimpton.

Buckner died in New York City on March 11, 1941. His obituary in the New York Times said: