In 1919, Arthur A. Ballantine, the Internal Revenue Service's first solicitor, joined the firm. He and Emory Buckner ran the firm throughout the 1920s and 1930s. During the Great Depression, the firm flourished by moving away from its traditional focus on litigation and to begin focusing on bankruptcy and reorganizations, and then by taking advantage of the New Deal to build a thriving regulatory practice.

The firm also built up a corporate practice, serving clients such as AT&T and Standard Oil. Overall, the firm expanded from 8 to 74 associates and opened a second office in Washington, D.C. Both Henry Friendly and John Marshall Harlan II worked at the firm during this period.

The firm weathered many name changes from its founding through 1955, as named partners left the firm for periods of time to serve in a number of important government positions. Among them was Emory Buckner, who left to become United States Attorney for the Southern District of New York and is often credited with remaking that office into a professional prosecutorial office by declining to appoint Assistants based on party affiliation. Partner Grenville Clark served as United States Postmaster General. Later generations of partners included John Marshall Harlan II, who left the firm when appointed to serve as a Judge of the Second Circuit Court of Appeals and who later became an Associate Justice of the United States Supreme Court; Henry J. Friendly, who left with several partners to form the firm of Cleary, Friendly, Gottlieb & Steen (now Cleary Gottlieb Steen & Hamilton LLP) and later was appointed to serve on the Second Circuit Court of Appeals.

In 1961, Dewey invited Richard M. Nixon to move to New York following his loss in the presidential election and join the firm, but Nixon opted to remain in California and run for governor the following year. 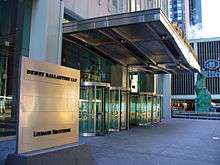 On October 25, 2006, the firm announced that it would merge with the San Francisco-based, Orrick, Herrington & Sutcliffe. With over 1,500 attorneys, the combined firm would have been among the 10 largest firms in the United States.[1] Ultimately, however, the two firms were not able to successfully negotiate the merger and it was called off in January 2007.[2] At about that time, Dewey Ballantine had approximately 500 attorneys in 12 offices around the world.

On October 1, 2007, Dewey Ballantine merged with LeBoeuf, Lamb, Greene & MacRae to form the combined firm of Dewey & LeBoeuf LLP. The combined firm had over 1,400 attorneys in 27 offices around the world. The headquarters for the newly merged Dewey & LeBoeuf was placed in the legacy Dewey Ballantine offices in the Calyon Building in Midtown Manhattan. The successor firm, Dewey & LeBoeuf, collapsed in May 2012 due to debt resulting from a poor partner recruiting and compensation strategy, which led to and was exacerbated by a talent exodus.