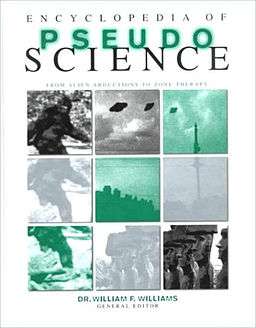 The Encyclopedia of Pseudoscience: From Alien Abductions to Zone Therapy (2000), edited by William F. Williams, "identifies, defines and explains terms and concepts related to the world of "almost science".[1] It includes over 2000 entries, covering phenomena, people, events, topics, places and associations.

Williams describes the criteria for inclusion:

I have to start somewhere, I am going to use this definition of science: 'The practice of generalizing from observations to form a rational explanation—a theory—of a particular part of our world and then testing that theory by experiment, rejecting it if it does not match up, accepting it provisionally if it does'. [..]

This then, will be my criterion for deciding what to categorize as science and what is pseudoscience, fraud, or something other than true science. [..] there are many distinct categories (1) claims for scientific status that do not satisfy the definition by any stretch of the imagination (2) frauds and hoaxes (3) mistaken theories that are sooner or later disproved (4) ideological presumptions (5) superstition.

The foregoing might be summarized by saying that we have included in this volume, thereby implying that they may be pseudoscientific, matters that are not generally accepted as legitimate science but that are or have been claimed to be so. For good measure we have included topics at the forefront of research that are still controversial.[2]

Entries in the Encyclopedia do not necessarily note to which criteria an entry belongs.

The book includes a wide range of entries, including Astrology, Flat Earth Society, Phrenology and UFOlogy.

William F. Williams was formerly visiting Professor at the Department of Science, Technology, and Society at Pennsylvania State University, and was the William Weiss Fellow in Engineering from 1992 to 1993. He is also a Life Fellow at the University of Leeds, England. His publications include Are Science and Technology Neutral? (Butterworth), and he has served as editor in chief of the Science in a Social Context series (also for Butterworth). Williams resides in England.[4]

The Skeptical Inquirer review of the book says that, ".. errors, major and minor, can be found throughout.", "It reads more like a collection of opinions", "[needs to] contain material that is both correct and objective. Unfortunately, this tome fails on both counts."[5]

This article is issued from Wikipedia - version of the 7/26/2015. The text is available under the Creative Commons Attribution/Share Alike but additional terms may apply for the media files.