Faleomavaega was born in Vailoatai Village, American Samoa, but he grew up in Oahu, Hawaii. He graduated from Kahuku High School and attended Brigham Young University-Hawaii, where he earned his associate degree. He then transferred to Brigham Young University's main campus in Utah and earned a bachelor's degree in political science. He attended the University of Houston Law Center and the UC-Berkeley, earning his Juris Doctor and Master of Law degrees. He served in the United States Army from 1966–69, and as an officer in the United States Army Reserve from 1982 to 1989. He served in the Vietnam War and left the military with the rank of captain. He and his wife are active members of The Church of Jesus Christ of Latter-day Saints.[2]

Faleomavaega has suffered from complications that he has said are from his exposure to Agent Orange during the Vietnam War.[3][4] This may have contributed to his 2014 election defeat.[3][4]

Faleomavaega served as the administrative assistant to American Samoa Delegate A.U. Fuimaono from 1973 to 1975 and as staff counsel for the House Committee on Interior and Insular Affairs from 1975 to 1981. He worked as Deputy Attorney General for the territory of American Samoa between 1981 and 1984.

Faleomavaega entered elective politics when he ran alongside A. P. Lutali in the 1985 gubernatorial race. He served as Lieutenant Governor of American Samoa from 1985–89. In 1987, he participated in an event that followed traditional Polynesian life experiences by sailing from Tahiti to Hawaii in a canoe.[5] 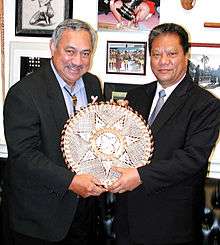 Faleomavaega and former president of the Marshall Islands Kessai Note. 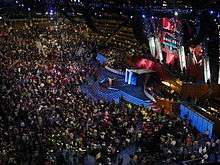 Faleomavaega, a superdelegate, announces the distribution of American Samoa's delegate votes as part of the roll call of the states during the third day of the 2008 Democratic National Convention in Denver, Colorado.

Faleomavaega was elected as a Democrat to the House of Representatives in 1988, serving from January 3, 1989 until January 2015.[5] As a delegate, he has worked to receive more federal funding for his home territory, particularly for health care and other essential services. He has opposed free trade deals involving meats and seafood, as nearly one-third of his territory's population is involved in the tuna industry. He proposed legislation that would allow residents of US territories to vote in presidential elections if they are active duty members of the military.[6]

Faleomavaega was a member of the following committees in the House of Representatives:

Faleomavaega has said that it is more opportune if the United States could refrain from interfering in internal affairs of Sri Lanka. He took the initiative of briefing members of the Sub Committee on Asia and the Pacific of the US House of Representatives in this respect.[7]

In 2012, both Faleomavaega and Togiola Tulafono, American Samoa's Governor, called for the populace to consider a move towards autonomy if not independence, to a mixed response.[8][9]

Faleomavaega is known for his vocal support of Bahrain's monarchy during the Bahraini uprising. One of Faleomavaega's top campaign donors, William Nixon, is a Washington, D.C.-based lobbyist whose firm, Policy Impact Communications, founded the pro-monarchy Bahrain American Council.[10] He has taken various paid trips to Bahrain to meet with that country's rulers.[11]