Perpendicular bisector of a line segment. All the points on the red line are equidistant from the two end points of the black line segment. 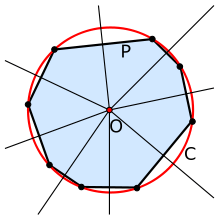 The cyclic polygon P is circumscribed by the circle C. The circumcentre O is equidistant to each point on the circle, and a fortiori to each vertex of the polygon.

A point is said to be equidistant from a set of objects if the distances between that point and each object in the set are equal.[1]

A parabola is the set of points in a plane equidistant from a fixed point (the focus) and a fixed line (the directrix), where distance from the directrix is measured along a line perpendicular to the directrix.

In shape analysis, the topological skeleton or medial axis of a shape is a thin version of that shape that is equidistant from its boundaries.

In Euclidean geometry, parallel lines (lines that never intersect) are equidistant in the sense that the distance of any point on one line from the nearest point on the other line is the same for all points.

In hyperbolic geometry the set of points that are equidistant from and on one side of a given line form an hypercycle (which is a curve not a line).[2]