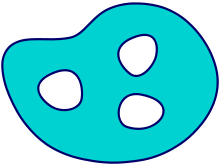 A set (in light blue) and its boundary (in dark blue).

If the set consists of discrete points only, then the set has only a boundary and no interior.

There are several common (and equivalent) definitions to the boundary of a subset S of a topological space X: 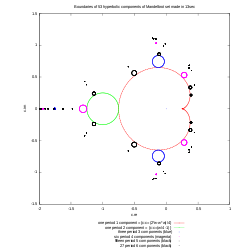 Consider the real line R with the usual topology (i.e. the topology whose basis sets are open intervals). One has

These last two examples illustrate the fact that the boundary of a dense set with empty interior is its closure.

In the space of rational numbers with the usual topology (the subspace topology of R), the boundary of

, where a is irrational, is empty. 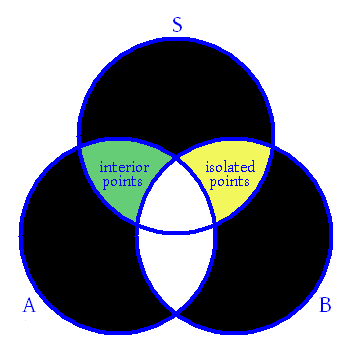 Boundary of a boundary

For any set S, ∂S ⊇ ∂∂S, with equality holding if and only if the boundary of S has no interior points, which will be the case for example if S is either closed or open. Since the boundary of a set is closed, ∂∂S = ∂∂∂S for any set S. The boundary operator thus satisfies a weakened kind of idempotence.